You Ain’t Never Going To Drain The American Swamp

“If you fired 50% of the employees of the American government bureaucracy, federal, state, or local, you would still have a Progressive – Liberal infested, fetid, smelly swamp of Progressive brainwashed workers who graduated from one or more of the liberal American colleges and have no concept of individual freedom or unalienable rights.” —Ron Ewart

Millions of people watched last Sunday’s 60 Minute double segment expose’ of the opioid epidemic and the efforts by U. S. Drug Enforcement (DEA) to stem the tide of illicit opioid prescriptions flooding the market from three major drug distributors and sending thousands upon thousands of opioid addicts to their deaths.  But Drug Enforcement efforts were thwarted by Pharmaceutical lobbyists who managed to get a bill passed that severely limited DEA efforts to put the bad guys away. 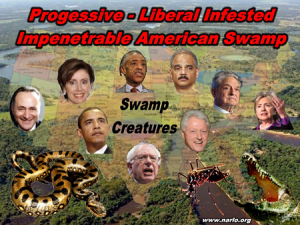 What became immediately apparent from the story is that the big business – big government collusion, racketeering swamp was well oiled and working like it always does when awash in big money.  Many of the DEA attorneys responsible for investigating and prosecuting illegal opioid distribution were spirited away with the offer of big salaries by the major drug distributors, who then lobbied for the drug distributors to obtain favorable legislation in Congress.  Since most members of Congress have no honor, on either side of the aisle, the offer of big money for their next campaign (or money in their pockets) is too tempting to pass up.  One of the sponsors of the bill that severely limited DEA opioid drug enforcement was appointed by the President to become the next Drug Czar.

So you see ladies and gentlemen, the “SWAMP” is still operating at full tilt and as it stands right now, nothing is going to stop it.   Trump can’t or won’t stop it and Congress doesn’t want to stop it, being part of the SWAMP’s big-business, big-money collusion racket.

Government, at least in what is left of the Constitutional Republic of America, is (or was) about preserving, protecting and defending the individual, God-given rights of the people.  Government is (or was) also about service, service to the people for functions that only government can accomplish.  In America, the people established the government and the government was and is supposed to be the servant for the people.  But alas, it is a fact, the servant has become the master without a shot being fired and the SWAMP is in full control..

Government (the SWAMP) has sent hither swarms of officers and bureaucrats to pass millions of unconstitutional laws and eat out our substance.  The ironic part is, these bureaucrats that harass the people were the creation of past and current Congresses and presidents, in direct violation of their solemn oaths to preserve, protect and defend the Constitution and the rights of the people.

The duty of those Congresses and presidents was to provide oversight to the bureaucracies, but as anyone can see from observing just the current scandals with the Veterans Administration, the Justice Department, the NSA, the INS, the FBI, the USDA, the DOE, the DHS, the IRS, the BLM, the EPA, etc., oversight is a mirage and out-of-control bureaucracies with dictatorial powers (the SWAMP) are the reality.  In fact, it has gotten so bad, that bureaucracies have become an irreversible power unto themselves and the Congress, much less the president, appear to be powerless or unwilling to rein them in, or stop them.  What exists today is a culture of criminally wasteful and corrupt bureaucratic employee entitlement, funded at great expense by the hapless and virtually helpless American taxpayer.

If Congress won’t pass legislation that the bureaucrats want, the president just writes an executive order, or the bureaucrats just promulgate a rule, thereby effectively repealing Article 1, Section 1 of the U. S. Constitution.   What constitution?  Maybe the dog ate it.

THE VA:  The most volatile scandal today involving a bureaucracy is the Veterans Administration (VA).  The VA has been a scandal for decades and everyone in and out of government has known it but has done nothing.  It is a prime example of the inefficiency of big government (the SWAMP) that prides itself in protecting its turf, wasting billions of tax dollars and rewarding its perpetrators with bonuses.   If the VA is any example of administering a single-payer health care system for veterans as a government-run bureaucracy, the people must be loving how government is running Obama Care.  In 2009 we wrote 18 Basic Principles for America.  Principle number 17 states the following:

“17. The entire Veterans Administration office should be overhauled and new policies put in place with the funds to match. These new policies would create an absolute priority for treating our veterans and their families with respect, honor, dignity and the admiration that they deserve.  These people gave their lives, mind and limbs in the service of our country, defending our cherished freedoms. The current VA programs are an egregious affront to these individuals and an abysmal travesty.”

But then who will implement this reasonable and justifiable solution?  The Congress?  Not likely.  The VA has too many friends in high places because it is just another out-of-control federal bureaucracy (the SWAMP) living high off of our money.

MEDICARE:  (the SWAMP) A recent Office of Inspector General (OIG) report on the multi-billion dollar waste, fraud and abuse in the Medicare program, determined that it was more effective financially to do nothing, rather than trying to fix the problem.  If the government is so careless about spending the people’s tax dollars, why then should the people care about paying those tax dollars?  Why indeed!

THE EPA:  (the SWAMP) Another out-of-control government bureaucracy is the Environmental Protection Agency (EPA).  It is proposing two new rules that will have a significant negative impact on the economy and a disastrous effect on local land use control and property rights, especially for rural landowners.

Comes now the EPA, at the direction of radical environmentalists, to promulgate rules for CO2 emissions from gas and coal-fired power plants based on flawed climate computer models.  (See ” “Global Mass Hysteria From Notoriously Inaccurate Climate Modeling“)  The overly strict new rules, without a doubt, would stifle economic growth by raising energy prices and killing much needed jobs if the Trump Administration had not reached in to stop it.

THE BLM:  (The SWAMP) Many of us witnessed the abuse of power by the Bureau of Land Management (BLM) at the Bundy cattle ranch in Nevada, Senator Harry Reid’s royal desert stronghold.  It was all over the news for a couple of weeks.  When the heavily armed BLM SWAT team was faced with a bunch of angry landowners, cowboys and militia, the BLM stood down, thankfully.

But this is just one area in which the out-of-control bureaucracy known as the BLM is exercising dictatorial power over other disputed lands in the West, to the point that an armed cadre of open carry landowners and militia were confronting the BLM along the Red River in Texas.  A similar event was occurring in New Mexico at the time.

Once again, the BLM, the EPA, the Department of U. S. Fish and Wildlife, the Forest Service, the National Park Service and the Department of Agriculture (the SWAMP) are all dancing to the radical environmentalist’s agenda.  This agenda emanates from the United Nations under the Agenda 21 accord, which the American government, by presidential executive order, codified into American law without a treaty being debated and ratified by the U. S. Congress.

THE DHS:  (The SWAMP) The Department of Homeland Security was formed not long after the airborne terrorist attack of September 11, 2001 on the Twin Towers in New York and the Pentagon in Washington DC.  This new cabinet level agency, under the president, combined 22 other government agencies into one giant bureaucracy, employing over 200,000 people with an operating budget of almost $100 Billion.  It covers all Immigration and Border Patrol functions, U. S. Customs Service, Animal and Plant Health Inspection Services, etc.  Its original function was to:

“The mission of the Office will be to develop and coordinate the implementation of a comprehensive national strategy to secure the United States from terrorist threats or attacks. The Office will coordinate the executive branch’s efforts to detect, prepare for, prevent, protect against, respond to, and recover from terrorist attacks within the United States.”

So why did DHS purchase 1.5 billion rounds of hollow point bullets and over 7,500 fully automatic assault rifles and is providing armored vehicles and SWAT equipment to major urban police departments around the country and other federal agencies, like the BLM?  Was this to fend off a significant terrorist attack, or was this massive weapons build-up to be used against the citizens of the United States who have had enough of the SWAMP?

THE IRS:  (The SWAMP) The Internal Revenue Service, another aggressive, out-of-control government agency, viciously collects our money in the form of taxes so that it can feed all these out-of-control dictatorial bureaucracies that pass unconstitutional rules (laws) and feed millions of illegal aliens with child tax credits.

What these American bureaucracies are doing is exactly what King George III did to the people of the 13 colonies that led to the American Revolution and the birth of freedom.  Today, the IRS knows no law but its own and seems to be impervious to independent investigation or congressional oversight.  It is a dictatorial power unto itself that Congress and the president allow to exist.  It uses that power against the people in violation of due process and other constitutional protections.  The income tax law may even be illegal.

We have barely touched the surface of the federal bureaucracies without hardly mentioning the hundreds of local and state bureaucracies.  The President’s cabinet consists of 15 major bureaucracies and each secretary of each cabinet answers directly to the president.  But no matter who is president, the U. S. Supreme Court has given all of the federal bureaucracies the power to operate as they see fit and their decisions could not be challenged, until just recently.  In the last 100 plus years, through unconstitutional legislation from Congress and the President and U. S. Supreme Court decisions, America has been silently converted from a Constitutional Republic into a SWAMP BUREAUCRACY and most of the American people are clueless.  From all appearances, it appears to be virtually impossible to peacefully drain the American SWAMP.

Let us know if you have a suggestion on how to DRAIN THE SWAMP.