Your Single-Family Home Uses Way Too Much Energy

FACT: The Green New Deal (GND) is driven by the fraud that is man-caused global warming, AKA Climate Change.  (Read the Socialist-Democrat sponsored GND.  It should scare the living crap out of you!)

FACT: Man-caused global warming is unsettled science and is driven by in-accurate computer climate models, producing predictions that have been unable to even mirror actual climate conditions.

FACT: Man-caused global warming is an environmental fraud that is driven by two elite agendas, one-world-order control by the ruling class under the United Nations and a massive transfer of wealth from rich nations to poor nations.  All the planet-wide propaganda about climate change is a lie, with the goal to herd the masses into tight, little, sterile cattle cages.  Believe at your own peril! 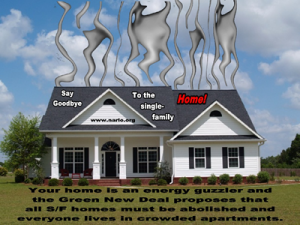 The Green New Deal is based on a false premise (climate change) that has been ginned up by collusion between the radical environmental community and the one-world-order crowd to subjugate the masses of the world!  It (the GND) would effectively kill American sovereignty; destroy our Constitutional Republic; repeal individual, unalienable rights and free choice; pull the rug out from under the American economy and bankrupt the nation; significantly reduce each American’s standard of living; raise unemployment into middle double digits; permanently wipe out property rights; force Americans to live in crowded high-rise apartment buildings and kick them out of their single-family homes; do away with our major source of protein, cows; phase out fossil fuels and finally, reduce each American’s freedom of movement by eliminating cars and airplanes.   Under the GND, every American becomes a servant (slave) to the ruling class who will live under no such restrictions.  All this damage will be inflicted upon the people of America (and the world) based on a climate lie!

Europe is moving forward on its own version of the Green New Deal.  What it wants to implement is not only humanly impractical, but flat out insane.  Here are two examples:

“New single family home construction, except trailers, prohibited.  New buildings must be exclusively condos with a maximum per capita living area of 320 square feet.”   (No single-family homes?  That WAS the American dream)

Check your freedom and your wallet ….
“When Environmentalists Plan”

GET ‘EM OUT OF THEIR CARS!

“For short trips less than 3 miles, the standard should be ‘soft transport’ (bicycles)… Mandatory fixed working hours in order to simplify the implementation of public transport and carpooling.”

Mandatory? Public Transportation?  Car Pooling?  This is what Alexandria Ocasio-Cortez, (a clueless puppet) along with her GND acolytes, are planning for you by forcing you to live in high dense, over crowded urban cities!  All this is based on the unverifiable theory and endless government propaganda of climate change.  You are being conned on a worldwide scale.

If you are not totally bereft of logic, it should be apparent to you that you cannot understand climate change until you can visualize the vast history of climate on planet earth.  To that end we wrote a guest editorial that was published in the Seattle Times in December of 2005.  We have been asked several times by our readers to republish the article and we do so here.

“The Farce of Global Warming”
by Ron Ewart
This was OUR title to the article.
The Seattle Times changed the title to:
“Warmed Over Environmentalism”

To see anything clearly, you must have a sufficiently broad perspective, accompanied by hard data, repeatable long-term observations and verifiable facts.  If you are standing and looking at the ground, your perspective and your field of view are quite limited.  If however, you are standing on the top of a mountain, your perspective broadens exponentially.  And thus it is with the subject of global warming.  Without a broader view, it is almost impossible to know whom or what to believe.  So a short history of the Earth is in order.

Over its lifetime, the Earth spun, tilted, heaved, shifted, rose and shrunk, drastically changed, expelled gases and molten lava, grew hot and then cold.  Continents drifted first toward each other (Pangea) and then away. Polar ice caps and glaciers melted and sea levels rose and then lowered.

About 12,000 years ago, one-third of the Earth’s surface was covered in a layer of ice more than one mile thick. During that ice age, which lasted longer than civilized man has lived on Earth, there were no animals, plants, insects or habitat that could survive in this harsh environment.  But life on Earth still survived in other places less hostile.  The ultimate thaw and the rushing torrent carved deep gouges and massive channels in the Earth’s surface.  It created riverbeds and dry falls and lakes and inland seas and other features in the Earth’s crust, not there before.  Now that was global warming on a grand scale.

Whole forests grew and then died out.  Mountains rose out of the bowels of the Earth, pushed up by continents in collision and then flattened back into the crust.  Rivers changed direction.  Monster lakes were formed.  Giant meteors struck the Earth at galactic speeds, carving massive holes in the crust and sending continent-size clouds of sunlight-dimming dust into the atmosphere.  The atmosphere became opaque and cut off the life-giving sunlight, rendering lifeless enormous parts of the planet.  Millions of species of plants and animals evolved, survived, reproduced and then died out, to be replaced by entirely different species of plants and animals.

However, major changes seldom occurred in cataclysmic events. They almost always took place agonizingly slowly, over eons of time, through the tedious, grinding, random, chaotic, disorganized process of natural evolution.  The variables were almost infinite and still are.

And today, those same agonizingly slow processes are at work.  We are an integral part of those processes but we will have little or no effect on any final outcome.  We will but only tickle the grander elements such as the sun, the moon and the Earth itself, none of which is predictable, much less measurable to the degree necessary for accurate predictions.

A few spewing volcanoes or an episode of sunspots can totally invalidate any computer models.  Just look at weather predictions.  Any prediction is good for about two hours and that is why the environmentalists’ models were predicting an ice age 20 years ago and now they are predicting global warming.  It’s an insult to true science.

The universe, our solar system and even our Earth are violent, dangerous places to humans and other life forms and always have been.  Just ask the dinosaurs.  So far, we have just been lucky.  A close-by (in galactic terms) supernova in the spiral arm of the Milky Way in which our solar system resides, could flood the sun and planets with massive amounts of deadly radiation and render Earth lifeless and barren.  If the sun changed its energy output by a significant fraction, all life on Earth could cease.  An errant asteroid or comet could cross the Earth’s orbit and the resulting collision could dramatically change the pattern of life, or terminate it altogether.

Environmentalists cry “wolf” on very little data and way-too-short time periods to come up with meaningful predictions, as they have with global warming.  Unfortunately, environmentalism has become a cult of mindless followers with a distorted vision of how humans and the Earth should relate to each other.  Earth gets the highest priorities — over people — in spite of true science.  In reality, humans are but a part of the evolutionary and natural processes of Earth and those processes, not environmentalists or governments, will determine the final outcome.  This is why their global-warming theory is an unmitigated farce.

Hopefully, this article will broaden your perspective on the earth and climate.

Yes, man is having an effect on mother earth, but ‘ole mother earth could heal itself in a thousand years, if man suddenly went extinct, which is quite within the realm of possibility.  A thousand years is nothing when compared to Earth’s total lifespan. 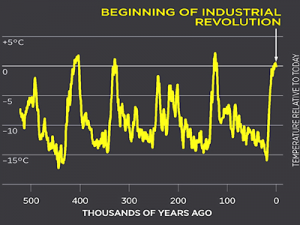 The following is a graph of climate changes that have occurred for 500 thousand years, taken from ice cores.  Notice the major temperature swings about every 100,000 years or so.  Then take notice of the temperature peak that occurred right around the same time of the industrial revolution.  This begs the question, is the temperature rise in contemporary times caused from human-induced CO2 emissions, or is it a natural upward cyclical swing in the temperature that has no connection whatsoever with the level of CO2 in the atmosphere, natural or man caused?  With such a giant question looming out there, why on earth would we rip fossil fuels from our existence, given that fossil fuels directly correlate to our rise in our unprecedented standard of living?

Critical thinkers know and understand that science is not a conservative or a liberal exercise.  True science is self-correcting and is open to constant debate and pain-staking analysis, requiring repeatable and verifiable experiments and observations until the shadow of doubt has been removed.  Science is not supposed to be a political football that can be manipulated for a political agenda.  Unfortunately, that is what climate science has become, to the detriment of the people that have allowed themselves to buy into the climate hoax to the point of driving each of you out of your single-family homes!

We have taken a considerable amount of time to amass a list of articles and essays from credible sources rebutting the climate alarmists.  We have created a web page on our website with links to the articles HERE.  You owe it to yourself to become better informed about this issue.  If you will take the time to read these articles, you will begin to see the flaws in the climate alarmist’s science, based solely on computer models.  We have also listed several climate alarmist websites for children that perpetuate the climate change myth.  These websites are paid for with your tax dollars and shows the length to which the government and the environmentalists will go to drive their version of climate change alarmism down our collective throats …. by brainwashing our vulnerable children.

Ladies and gentlemen, much of what is occurring in our government today results directly from institutionalized political corruption.  Corruption is why government and the environmentalists are pushing climate change.  It is why our health care is dysfunctional and way too expensive.  It is why our borders are not secure and millions of illegal aliens are flooding into our country.  It is why our children are being brainwashed in our schools and colleges.  It is why our roads, bridges and other infrastructure are in a bad state of repair.  Corruption is why Hillary Clinton runs around free as a bird and why black-gay actor, Jussie Smollet got off with no charges filed against him.  It is why representative government is dead or dying.  If you are interested in learning more about corruption and helping to reduce it, click HERE.