In 2006, a group of eight men and women rode their motorcycles 20,300 miles across 48 states to speak at 48 state capitols about the fact that the United States of America faced an invasion of legal and illegal immigrants. They ended up speaking in Washington DC.  Yours truly led that group across America with the same sense of purpose that Paul Revere rode his horse in 1776 to alert the citizens of the imminent invasion of the British Red Coats.  (You may go to Google for clips of our speeches and highlights of the ride on You Tube. Type in: 21st Century Paul Revere Ride.)

We gave 96 television, 90 newsprint and 40 radio show interviews.  We reached somewhere around 50 million Americans, if not millions more.  We touted www.NumbersUSA.org , which enjoyed one million members, and today, nearly 10 million Americans from all walks of life, who demand our immigration laws be enforced. And, and in fact, to rescind the 1965 Immigration Reform Act that continues flooding over 1,000,000 legal immigrants into our country annually!

Twelve years later, our country added not only 12,000,000 (million) more immigrants, but those 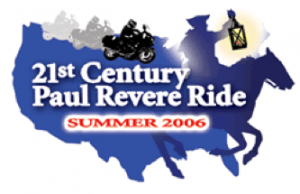 In that 12-year period, we’ve added more than 35 million people to our population. In 2006, we reached 300 million. Today, 330 million people live in America as we accelerate toward 438 million by 2050.  Virtually all of it pushed by immigration!

Today, over 44 million people living in the USA: foreign born.  They possess no idea of what our forefathers faced.  They lack any understanding of our history.  They bring incompatible cultures and languages. They bring antagonistic world views. We see 800 languages spoken in New York City.  We see 173 languages in Denver Public Schools.  Over 100 languages in Los Angeles. Chicago, with over a half million illegal aliens, remains a war zone.  We’re spending billions on English as a Second Language courses to millions of immigrant kids, both legal and illegal.  But we must press “1” for Spanish and “2” for English and “3” for Arabic.

What happens when we see another 100 million immigrants imported into America within the next 30 years?  Do you see the magnitude of our calamitous future?

Obviously, my efforts along with the members of the 21st Century Paul Revere Ride—-FAILED MISERABLY.

Worse, I’ve discovered that MOST Americans don’t realize the end result of what our civilization faces.  Secondly, they remain clueless as to the impact of another 100 million immigrants.  Thirdly, they remain apathetic that they face losing their language, culture and ethos.  Fourthly, they don’t realize that our U.S. Congress works for endless immigration instead stopping it.

Notice that with all the gridlock, all the air pollution, all the homeless, failing schools, $20 trillion in debt, millions of poor Americans, infrastructure collapsing, and medical problems—your Congress continues importing 100,000 legal immigrants every 30 days and they allow 500,000 illegal aliens annually to jump our borders.

Even after Diversity Visa immigrants ran down and killed nine people in New York City several months ago and Chain-Migrated immigrant terrorists killed people—Congress did nothing to stop those kinds of visa immigrants.  After the Orlando massacre, San Bernardino, Garland, Times Square, Ohio State and a dozen other Moslem terror attacks within the USA, Congress does NOTHING to stop Moslem immigration.  Notice that federal judges stop President Trump from enforcing “no travel” imports of Moslems from terrorist countries.  Notice how NONE of our Congressional Critters does anything to rescind the 1965 Immigration Reform Act when our infrastructure fails across the country and our environment turns to ashes. (Save U.S. Senator Tom Cotton of AK, Steve King of IA and Peter King of NY)

Instead, Congress imports more Syrian refugees with no chance to stop terrorists from coming with them.  And, why import them when we’ve got 13 million of our American kids living below the poverty line?  Over one million Americans remain homeless in our country.  More than 5 million unemployed!  Does anyone think maybe they should come first before refugees 10,000 miles away?

How about stopping illegal immigration at over 500,000 annually and over 20 million within our

country working and living in violation of our laws?  We could stop it in a heartbeat by enforcing our labor, transportation and housing laws on the books.  But do our governors and law enforcement enforce those laws?  NOPE!  In fact, over 240 city mayors and city councils provide safe haven as “Sanctuary Cities” for those violating our borders and laws.

And the beat goes on! American taxpayers foot the bill and the Congress keeps giving our tax dollars away to immigrants to the tune of $296 billion annually across 15 federal agencies, year after year.

Dear fellow American, do you have any ideas how I can be more compelling in my task to alert the nation as a 21st century Paul Revere?    Am I missing something?  What more can I do?  I’ve tried to interview on “60 Minutes”; “Meet the Press”; “Fact the Nation”; Tucker Carlson; NPR; PBS; ABC; NBC; CNN, Ted Talks, and more for over 20 years. Somehow, Paul Revere succeeded and I failed.  I just can’t figure out what I am doing wrong.  Do you have any ideas on how I can better alert the nation as to the consequences of adding another 100 million legal immigrants?  The two videos below should scare the hell out of any parent as to what we are bequeathing to our children.

Because if not, I will continue to fail miserably in my task as a 21st century Paul Revere.