Two nights ago, February 15, 2022, on News Nation with Ashleigh Banfield, she reported that America features 580,000 homeless citizens.  Not only that, but San Francisco boasts 35,000 homeless while Los Angeles simmers with 66,000 people living in tents, sleeping on cardboard boxes and deposit their daily constitutional on the streets of the city. On the West Coast, Seattle sports 6,000 homeless living near grade schools, under bridges, in the woods and right up to residential fence lines.

In 2019, I bicycled through San Francisco to see it for myself.  The streets reeked with feces, rotten food, rat droppings, needles, trash everywhere and urine.  When I pedaled through Los Angeles, it was almost beyond imagination how anyone could live in such human misery.

While traveling through Asia, I saw the same thing 20 years ago.  India features 1.4 billion people living at the lowest end of the spectrum.  An astounding 60 percent of Indians lack a toilet, shower and sink.  Poverty remains the norm.  Filth cannot be imagined.  Trash stifles every street, river and lake. Illiteracy dominates.

In Denver, I see 10,000 homeless at every juncture in the city.  They’ve trashed City Park so much so; they have gated it off against anyone.

The glaring, if not totally insane aspect of all this homelessness stems from the fact that our U.S. Congress and this president continue pouring millions more homeless into our country every year.  And yet, the mainstream media suppresses any mention of all of it. 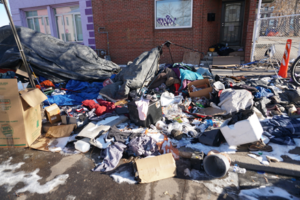 (These are the streets of downtown Denver, Colorado. Street after street, after street. Denver City Council members voted to allow this situation.)  Photo by Frosty Wooldridge

Banfield interviewed Christi Carpenter of SafeTime, who works to place homeless people in residential homes.  She proved to be a wide-eyed idealist that possessed no idea of the dangers to homeowners to let deranged-drug-addicted, illiterate, drunken and totally insane individuals into average American homes.  How do you get 35,000 in San Francisco and another 66,000 LA homeless into residential homes?

Having bicycled through their ranks, I witnessed third world misery here in the USA, which, by the way, the stench sickened me in India and Bangladesh, but to smell it here in America, it’s nearly impossible to understand what those people in charge in all these cities are doing to solve the crisis.  Here in Denver, they let them camp and crap all over the streets off California Ave and 14th.  I snapped dozens of pictures.

And yet, Biden wants another 2,000,000 third world migrants added again to our country in 2022.  What kind of crazy people operate in Washington DC?  We know AOC, the daffy dufus female out of New York is a whack job.  We know that Maxine Waters from California can’t add 2+2 to obtain 4.  We know that Senator Diane Feinstein and Nancy Pelosi “insider trade” on defense contracts, but they won’t solve the homeless problems in their own states. 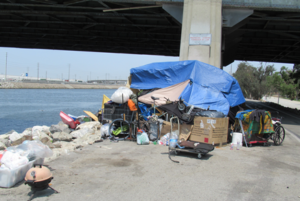 (Over 66,000 homeless in Los Angeles live under bridges, on the streets, on the beaches, trash everywhere, drugs, human misery, and, the people in charge refuse to solve the problems.) Photo by Frosty Wooldridge

And did you notice the homeless African-American Tuesday night follow an Asian-American girl back to her apartment in New York City, while he walked in behind her, and stabbed her 40 times. She died.  He featured a criminal record as long as a football field and a brain the size of a pea…but he was let out every time until he killed that girl. Now, we get to feed him three squares and a cot for the next 60 years at an average of $65,000.00 annually.

Is there an “ounce of common sense” in Washington DC?

Is anyone in America thinking about these questions?  Are we not galloping into America’s twilight years?

If you would like a free electronic copy of this book, please email me with your email address and I will send it to you.  Every American with children or any American who will live in this country in 2050, needs to understand what they face. frostyw@juno.com

As to what these videos report, do you want your children to face this kind of a future?  If you don’t, it’s time to speak up across this great country of ours.

This video graphically and dramatically illustrates America’s immigration-population crisis as well as the world’s. I wrote it and narrated it. Tim Walters of Cleveland, Ohio directed and produced. Please forward it to all your friends, networks and beyond. Place it on FB, Twitter, Linkedin, Parler, Tick-Tok, Curiosity, and more.  Just click the link below to see the video.

This video will scare the daylights out of every American as to what’s coming to our country, US Citizenship Act 2021 by Joe Biden.

If you want to see two documentaries that give visual proof of my book’s contents, go to Netflix, and type in “Cowspiracy” that shows you the damage to the air, land and water.  Watch “Seaspiracy” to see how humans are destroying the oceans.

We need a total termination of all immigration for the next 20 years. These two organizations are the only ones to advocate for a 20 year moratorium on all immigration. Take action:  www.Balance.org and www.carrycapacitynetwork.org

“In a five minute astoundingly simple yet brilliant video, Immigration, Poverty, and Gum Balls”, Roy Beck, director of www.numbersusa.ORG, graphically illustrates the impact of overpopulation.  Take five minutes to see for yourself.