666 Is Here As Bible Predicted!–For Real!

While the democrat-Communist party was keeping us all distracted by such things as that idiotic ‘impeachment’ charade against the best president in modern history, a Bible Prophecy was quietly fulfilled that no one expected. The Book of Revelation tells us of a leader who will come quietly on the scene to totally control the population by using a “Mark of the Beast” device to accomplish this.

This means a required ‘quantum dot tattoo microchip’ to be put in the bodies of every human being, by vaccination, like tagging cattle. That chip will have every bit of information about the individual’s life, including bank accounts and medical issues. Without this chip one cannot buy, sell or conduct any kind of business. Plus that chip acts as your ID. The government controls what you are allowed to do and what you are NOT allowed to do, based on your ‘vaccination’ status. If you do not comply with this, you will become a non-person and unable to make a living or even survive. You will be under complete control of the ‘government’ that will tell you what you can and cannot do.’ 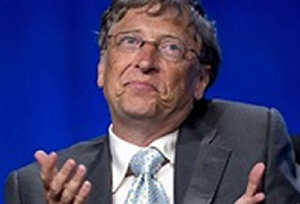 And who is the garu behind this? The very wealthy eugenicist Bill Gates, yes Bill Gates, who first really came on the scene in October 2019 where he conducted his Event 201 Forum, which featured discussions about, now get this, “a hypothetical coronavirus pandemic and how to handle this. Now hold on. Was this a spectacular prophecy given Bill Gates, or was this PLANNED? It was clear that this was all to happen, along with their ‘solutions’ waiting in the wings for a grand unveiling.

According to writer Lance Goodall, for Natural News, when asked what changes were to take place to make how businesses operate to maintain our economy while providing social distancing, Gates responded: “The question of which businesses should keep going is tricky. Certainly food supply and the health system. We still need water, electricity and the internet. Supply chains for critical things need to be maintained. Countries are still figuring out what to keep running.”

Now this says it all:

So this entire pandemic has been organized and released by Bill Gates who will then control the antidote to the disease. There are those who sincerely feel that Gates is a Communist and have said so publicly.

Gates from the beginning was a mystery to this writer. Looking like he just fell off a tractor in a corn field he is one of the richest men in the world. Be clear, I am not downgrading country folk in any way since I was a country boy myself with a pet chicken. So actually the farm look was appealing to me. It’s just that one who possessed that characteristic was not always noted to be one of the wealthiest men on earth.

One interesting thing about farm people, the men took to the computers like Weinstein took to women. It seemed to be a natural attraction. Gates began as a computer programmer and then founded a hugely profitable Computer Software Company.

Gates offered this educated scheme: “Eventually we will have some digital certificates to show who has recovered from the virus and who has been tested recently, or when we have a vaccine and who has received it. Indeed he plans to create a global identification system for every person on earth.

So in the midst of this pandemic, God’s Word, the Bible, has given us a prophecy in Revelation 13: which states in Verse 16,
regarding the Mark of the Beast:

“He causes all, both small and great, rich and poor, free and slave, to receive a mark on their right hand or on their foreheads, and that no one may buy or sell except one who has the mark of the name of the beast, or the number of his name. Here is wisdom. Let him who has understanding calculate the number of the beast, for it is the number of a man: His number is 666.”

So there it is dear readers. Even during the toughest times such as this Coronavirus epidemic, God is still there, has always been here, and will continue to be here. He is our shield. Everyone is urged to read passages from the Bible every day. Learn everything about God that can be learned. Talk to fellow Christians on the phone. The same God that has been with us throughout history, will be with us through this virus. As the man with Men’s Warehouse would say, “I guarantee it.”