Tomorrow marks 20 years since the day that shocked the world.  It’s also the 20th year families of those slaughtered are still fighting for the truth to be exposed.  So many more have died since that day who were there giving their all to help save other lives.As of September 2020, the number of deaths will stun most Americans.

Cancer: A lasting legacy of the Sept. 11 attacks, Sept. 8, 2020:  “More than 2,750 Americans died in and around the World Trade Center on 9/11, and more than 2,000 responders and Ground Zero workers have died since from illnesses many attributed to their time at the site.

“While stopping short of calling the cancer outbreak among 9/11 workers an “epidemic,” researchers at Mount Sinai’s Icahn School of Medicine concluded that there’s “evidence of increased risk for certain cancers among WTC-exposed responders.”

“Mount Sinai studied 28,729 police officers and recovery workers from the 9/11 site. Firefighters were separated into a different research group. Similar to some other studies, and compared to the general population, the Mount Sinai research found that 9/11 police officers and recovery workers studied were:” I recommend reading the entire article.

Of course, not mentioned what else was found in the debris:  military grade nano-Thermite.

Over the years the official narrative has remained the same.  The prostitute media ridiculed, mocked, excoriated and attacked any expert regardless of how experienced in their field as conspiracy nuts.  No challenge to the official story was to be allowed – and still isn’t.  The same Soviet-style propaganda that’s kept the monstrous lies about COVID-19 alive for the past 18 months.

Just like OKC, the first on-site cover agein real time that day were accurate.  My good friend, Jerry Longspaugh, God rest his soul, sent me a film, Cover-Up in OKC, shortly after the building was blown up in 1995.  The lies sold remains “truth” today while the guilty not only walk free, those who covered up the truth (FBI) and other alphabet soup agencies, not only kept their jobs, some were promoted.

One hundred sixty-eight Americans died that day.  I went to OKC and did my own on-site investigation less than a month after the bombing.  My dear friend who passed away Dec. 20, 2019, retired USAF Brigadier General Ben Partin, did his expert analysis.  In June 1998, to raise money for our Wallace Institute (Larry Becraft and I started), I put on a fund raiser in Santa Clara, California.  It was a huge success.  Ben spoke about OKC.  The video is here.

Proof of Bombs and Coverup, July 20, 1998, The New American:  “The earliest and most compelling challenge to the lone bomb/lone bomber theory came from Brigadier General Benton K. Partin (USAF, Retired), an expert with sterling credentials and a distinguished military career. On May 18, 1995, one month after the bombing, General Partin delivered a preliminary detailed analysis of the event to members of Congress.

“From all the evidence I have seen in the published material,” Partin testified,” I can say with a high level of confidence that the damage pattern on the reinforced concrete superstructure could not possibly have been attained from the single truck bomb without supplementing demolition charges at some of the reinforced column bases.”

“In that report (See “OKC Bombing: Expert Analysis” in our June 26, 1995 issue), and in the detailed study which he released on July 13, 1995 (see “Explosive Evidence” in our August 7, 1995 issue), Partin eviscerated the prosecution’s lone-bomb thesis with a host of findings from the forensic evidence indicating that demolition charges were certainly used inside the Murrah Building.

“Since that time, a veritable mountain of evidence, documents, records, eyewitness testimony, and authoritative support has accumulated to fortify General Partin’s thesis, making the stubborn adherence of government officials and journalists to the lone-bomb scenario truly incredible.”

OKC:  What Really Destroyed the Building?,  January 18, 2004, “According to the OIG (Office of Inspector General) report, the FBI lab boys have no idea if ANFO was used as “weapons of mass destruction in the Murrah bombing.” Here is just a tiny sample of “evidence” used to send someone to death row:

In Section B: Oklahoma City bombing:

“We conclude that it was inappropriate for Williams to render a categorical opinion in his report that the main charge was ANFO. As discussed with reference to the World Trade Center case, it is inappropriate for a forensic Laboratory examiner to identify the main charge based in whole or in part on prior knowledge of the explosive components purchased by a defendant. Such an identification is not based on scientific or technical grounds and appears to tailor the opinion to evidence associated with the defendants.

“Moreover, Williams’ report does not mention that the defendant’s purchases were the basis of the ANFO opinion. The report is presented as an FBI Laboratory report. It begins with the phrase, Results of examination: The reader is left with the impression that the opinions presented are based on the scientific analyses of the FBI Laboratory.

“Accordingly, Williams’ opinion that the main charge was ANFO appears to be based solely on his technical expertise as an explosives examiner and thus appears to be very incriminating to someone (like defendant Nichols) who allegedly purchased ANFO components before the Oklahoma City explosion. The opinion is thus misleading and presents the case in a way most incriminating to the defendants. Had Williams explicitly stated in his report that the ANFO opinion was based on the defendant’s purchases, the opinion could have been appropriately discounted as a non-expert conclusion that seeks to match the characteristics of the explosion with evidence associated with the defendants.

“As indicated, Williams told us that the crime scene was consistent with the use of an ammonium nitrate dynamite, which could have had a VOD in the range Williams estimated. The major components of ammonium nitrate dynamite (ammonium nitrate and nitroglycerin) were found at the crime scene. A dynamite wrapper was also found. Williams’ report, however, fails to address the possibility that the main charge consisted of dynamite, which an objective report would explicitly have discussed.

“We conclude that Williams’ categorical conclusion that the main charge was ANFO was not scientifically justified and was based on improper grounds.

“And, In Section G of the same OIG report:” Rest at link. 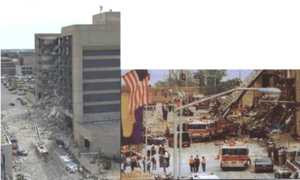 That building was blown from the INSIDE, not from the Ryder truck parked out front.

Architects & Engineers for 9/11 Truth have been on a journey of extraordinary challenges for close to two decades.  Buffoons in the prostitute media, cowards in Congress and government alphabet soup agencies have painted them as liars, conspiracy wackos.  The usual menu of labels.

There’s NO question Building 7 was brought down by a controlled demotion.  When my late husband and I watched that building pancake down later in the afternoon, the first thing John said:  controlled demolition.  He was a retired U.S. Army Colonel, 27 years, Army Corps of Engineers.  It would have been impossible to set charges and all the other components that goes into bringing down a big building like that in a few hours.  No, it was planned ahead of time.

Architects  & Engineers for 9/11 Truth have been on a journey of extraordinary challenges for close to two decades.  Legal updates: The Latest on 9/11 Legal Actions /  Hundreds of activists send Building 7 film to congressional reps /  9/11 families sue NIST over World Trade Center Building 7 report

Liars for hire in the prostitute media, cowards in Congress and government alphabet soup agencies have also given the same menu of labels to Pilots for 9/11 Truth.  I highly recommend you visit their site, too.  They’re also seeking to get a grand jury.

Every American – except the America haters who reside in this country – were profoundly affected by what happened that day.  The families have been trying for nearly two decades to get the truth but have hit stone wall after stone wall.  If there’s nothing to hide, why fight to keep the truth from coming out?

TWA flight 800, OKC Bombing, the stolen November 2020 election, COVID pandemic, 9/11.  The Patriot Act and every other draconian “law” that grew out of 9/11.  The push was on to kill our freedoms and erect a police state in this country.  It now all but a fait accompli thanks to the COVID-19 manufactured pandemic.

What if your mom, dad, sister, brother, aunt, uncle, husband, wife, your precious child died that day either in the twin towers, Shanksville, PA., or at the Pentagon? Wouldn’t you fight for the truth when there’s so much evidence being ignored?

I firmly believe Flight 77 did not crash into the Pentagon.  In the past 30 years, the three issues I’ve written a million words about after spending a zillion hours doing research are the Federal Reserve, 9/11 and COVID-19.

Where did Flight 77 go?  Only one place and if I had Donald Trump’s money, I would have funded, how shall I put it? a recovery effort a long time ago.Watch the video below on nano-Thermite.  Let that sink in.

I’ve seen every photo ever posted of the Pentagon that day.  Here’s a montage of them.  Several show little pieces of alleged plane parts.  Where did they come from because if you watch the video below in real time, you’ll be asking yourself that question.

The pain for the families is forever.  No words I write or anyone else can alleviate that but what we do owe those who died that day, the families and all the heroes who’ve died since is the truth.  Those who planned that day (no, not dim wit Bush, Jr) still walk free.  Yes, it is a conspiracy.

This video is just under 20 minutes and is a MUST watch.Evidence of Military Grade Nano-Thermite discovered in Ground Zero & all of Downtown in “9/11 Dust”.

This is the main page for my 9/11 archives.  A massive amount of information.  The one I consider to be terribly important covers my trip to Shanksville, PA four years after 9/11.  I believe you will find it shocking.  Asking Questions at the Flight 93 Crash Site

McVeigh’s Second Trial by Devvy – That is a multi-part series I did after McVeigh’s execution.  The government from Clinton, Janet Reno on down lied to the American people; those lies are still considered truth.