I don’t expect every Young Adult Fiction novel to be The Chronicles of Narnia. But is “harmless” too much to ask for? If a story can’t be edifying, inspiring, or instructive, can’t it at least be harmless?

Now a Major Motion Picture, by Cori McCarthy, is none of the above.

It’s crisply and cleverly written, the plot expertly handled, both the narrative and the dialogue lit up with sparks. It’s full of romance without being a romance novel, and even has what I suppose we ought to call a happy ending.

But it’s not nice. Not nice at all.

I would have hated it, when I was 15, for my parents to vet my books before I was allowed to read them. If they were to withhold a book from me, that would have made it irresistibly alluring (“Man, there must be some real hot stuff in there!”). But in those days there wasn’t much, in the Young Adult Fiction market, to worry parents. My mother did read some of my books, when I was done with them, but only because she enjoyed them, too. 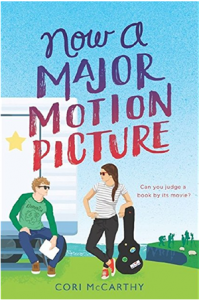 What Does the Author Want Her Readers to Believe?

Let’s get down to brass tacks. Taken only from the novel’s content, what are the things the author believes, that she would like her readers to believe in, too?

* There is no God, and no need for religion.

Throughout her book, McCarthy praises Philip Pullman’s fantasy trilogy, His Dark Materials, making a virtual icon of it. Pullman’s book is a heavy-handed atheist rant (see my review of it. At one point in the story, the teenage protagonist, Iris Thorne, praises her former tutor for giving her a copy of it: “His Dark Materials by Philip Pullman. It changed my life. It was amazing.” (pg. 177) She talks it up for her little brother, eight years old, who asks, eagerly, “You think you could get me those Dark Materials books?” She answers, “Definitely.” (pg. 178) Apparently it’s never too soon to start a very young reader on the road to atheism. Iris herself is already an atheist, and boasts that the whole Thorne family is atheist.

Parents Are a Waste of Space

* What parents mostly do is make their children as neurotic as they are.

Iris’ mother and father are deeply neurotic, and so is Iris. At first I found her first-person narrative voice witty and sharp—but in the long run, extremely tiresome.

This book is profoundly disrespectful to parents. If any of the characters in it have families that are not dysfunctional, they aren’t admitting it.

Iris’ mother locks herself in the greenhouse every day, writing poetry, and never appears. Iris’ father is a hack writer dying to be a literary figure, and is really much too nasty and sarcastic to be allowed near children. He only begins to imitate a human being after his teenage daughter reads him the riot act and forcefully, with a lot of profanity, straightens him out.

Unintended result: Somehow reading this tripe made me very thankful to God for blessing me with normal parents, grandparents, aunts and uncles who loved their children, raised them as Christians, and were not neurotic. I am sure that was not what Ms. McCarthy intended.

McCarthy’s vision of family ranges from the aggressively negative to the nonexistent. And one reaches the point, in reading this, where one knows everything that’s going to happen. Of course Iris overcomes her father and puts him in his place. Of course her life only turns the corner after she meets the right group of caring, affirming, wonderful age-group peers—and, of course, the ideal feminist mentor and role model. It’s all so tediously obvious.

A Heaping Dollop of Feminism

* Feminism and “gender diversity” will eventually make the world go ‘round the way it should.

Iris’ mission in the story is to save a major motion picture being made of her grandmother’s famous fantasy, “Elementia,” hailed as the long-awaited “feminist answer to The Lord of the Rings” (pardon me for yawning). The project is in all sorts of trouble, and only kept alive by the heroic efforts of its feminist director, who becomes Iris’ adult role model. Predictably, Iris saves the day—I guess because teenagers just naturally know the solutions to really tough problems. Sheesh.

Several times the director, Cate Collins, describes feminism as a “continent” embracing all women, blah-blah—maybe even Iris’ own singularly useless mother. We know this must be true because all the female characters in the story are way cooler than the males.

Well, if you’re not going to believe in God, and know Jesus Christ as your savior, you still have to believe in something—right? And you might as well let feminism or some other ism be your savior. By default, if nothing else. This substitution may not function in the real world, but here it works just fine—because Ms. McCarthy has decreed it so.

All Sex Is Good Sex

* ”Queer” sex is every bit as healthy and as good as normal sex.

McCarthy wants her readers to believe this, so she has created a mini-world where this is so. She has two young male actors get into character, or whatever it is they’re doing, by sharing a long and passionate kiss (pg. 160). It was Iris’ idea, and she thinks, “They looked beautiful together. In love.”

And when the movie’s young female lead tells Iris that she’s “queer” and wants to be a role model for “queer girls” worldwide, and confesses to having a crush on her makeup artist, Iris performs a bit of match-making—which works perfectly, of course—to bring the two young women together—and here I prefer not to add an adverb.

You’ve probably had enough of this by now. The book is almost 400 pages long, and I do mean “long.”

This book will attract young readers. It has the packaging for it, and everybody’s interested in the movies. It’s got a fantasy hook for fantasy fans, and a tease in the cover blurb about “the hot young cast” and “the infuriatingly charming lead.” Teens, especially the girls, will go for it.

All our “entertainment,” from movies to novels about movies, is a form of self-education. And it’s a passive kind of education, which makes it all the more effective: the consumer doesn’t know she’s being educated. We consume great quantities of this passive education, and, bit by bit, it shapes our hearts and minds and goes on to shape our culture. Our entertainment industry has a lot of mischief to answer for.

We want to win back cultural ground for Christ’s Kingdom, and it isn’t easy. Stuff like Now a Major Motion Picture is everywhere, and some—or much—of it is bound to slip into your children’s consumption of entertainment no matter how hard parents try to shut it out. We can’t get out of the world.

Train up the child in the way that he should go. Live, and manage family life, in such a way as to provide a good example: so that your child, if he should encounter anything like this book, will naturally be able to say to himself, “Wait a minute—my family’s not like that! I don’t even know any families like that.” The toxin loses much of its potency if the consumer realizes it’s a scam. A reasonably intelligent 12-year-old can learn to do that.

Wholesome, decent, Godly entertainment exists, and must be given its chance. But above all, the family must be strong. No one can go far wrong if they make the family the biggest thing in their children’s lives—not school, or school “friends” (even Iris knows her “friends” in school aren’t worth much), not movies, video games, iphones, or Facebook. Center life around God and the family: make that your child’s default position.

I am old enough now to thank God, every day, for my family: and I think I can say that I’ve survived the culture—bad books, bad movies, bad TV shows, bad company and all. Not without struggles, and many of them: but, as J.R.R. Tolkien observed, “Deep roots are not touched by the frost.”

I have discussed this and other issues throughout the week on my blog, http://leeduigon.com/ . Why not stop in and visit? A single click will take you there.