A Case of Mistaken Identity

Cassius Marcellus Clay, Jr. was born in Louisville, Kentucky, on January 17, 1942. Many today are more familiar with the name Muhammad Ali, who was one of the most famous heavy-weight boxing champions in the world and perhaps one of the greatest sports figures of the twentieth century. For many he was an icon of exceptional athletic skill, braggadocious humor, and civil activism.

During his rise to fame, Cassius Clay became involved with a religious sect called the Nation of Islam, a separatist group of Black American Muslims whose beliefs ran far-afield of orthodox Islam. The adherents of this religious group told him that his ancestors were Muslims and that he would do them honor by abandoning the slave name handed down to him and adopting an Islamic one. Little did he know, what he came to believe to be true was actually a deception, and one of great irony. 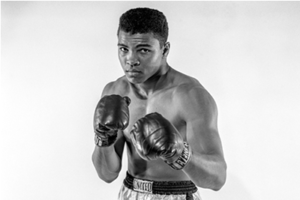 Muhammed, whose name Clay took, lived from 570 AD to 632 AD in the Arabian Peninsula. When he was around 40 years old, based on his claims of being visited by the angel Gabriel in a cave, he started proclaiming the message that God is One, that submission to God is the right way to live, and that he was God’s prophet or messenger. He called this new religious faith Islam. Starting with a few followers, Muhammed was able to eventually amass a significant number of converts, whom he led on wars of conquest to convert the Arabian Peninsula and beyond to his religion. Muslims began to practice slavery soon after the establishment of their faith, under Muhammed’s guidance. His successors continued this practice, including his fourth successor and nephew, Ali. According to authoritative Islamic sources, both men owned and traded slaves, some of whom were Black. Slavery continues to this day in Islamic countries like Libya, Sudan, and Mauritania.

Cassius Marcellus Clay for whom both the boxer and his father were named, was born to one of the wealthiest farming families and slaveholders in Kentucky. He lived from October 19, 1810, to July 22, 1903. Clay was part of a prominent political family, with members of his close and extended family serving in elected office at the state and federal level. He served as a Kentucky state representative and was an early member of the Republican party which was established in large part to end slavery in the United States.

While attending Yale College, Clay heard a lecture given by a prominent abolitionist named William Lloyd Garrison. His speech convinced Clay of the injustice of slavery and inspired him to join the abolitionist movement. Upon the death of his father, he inherited the family plantation and its slaves. In contrast to Muhammed, Clay released the slaves. They were free to go where they wished to live their own lives, and he offered them paid jobs if they wanted to continue working at the plantation.

Though many in Kentucky favored secession and the Confederacy during the Civil War, yet he established an anti-slavery newspaper called The True American, which was the only one of its kind in the state.

During his efforts to abolish slavery, Clay survived several attempts on his life. Throughout it all he remained an ardent abolitionist, and he even served as an advisor to President Abraham Lincoln in composing the text of the Emancipation Proclamation in 1863.

In 1855, Clay donated 10 acres of his own land to John Fee, another prominent abolitionist. Fee used the land to found the town of Berea, Kentucky, and also Berea College, which was the first college in the country open to all races.

What an irony that Cassius Marcellus Clay, Jr. abandoned his given name, thinking it represented a history of slavery, and adopted the name of two men who both owned and traded slaves.

The Lure of the Different Way

Just as the later Cassius Clay was truly convinced that his birth name belonged to a legacy of slavery and that Muhammed and Ali were his spiritual ancestors, some of the Christians in the church at Galatia were led to believe that faith in Jesus alone—His death on the cross for the forgiveness of sins, burial, and resurrection on the third day—was not enough for salvation. They were being persuaded by teachers proclaiming a different gospel from the one they had originally received.

These teachers believed in Jesus and that He died for sinners and rose again from the dead. They professed to be part of the body of Christ and fellowshipped with the Galatian believers. They even quoted Scripture with the appearance of godly wisdom to bolster their views. But in the end, they led some of the Galatian believers astray by convincing them that they needed to observe the law along with faith in Jesus.

Will the Real Good News Stand Up?

The gospel Paul preached was the good news that Jesus was the perfect fulfillment of the law in that He never sinned (1 Peter 2:22), and that He canceled the certificate of debt (Colossians 2:14), our sins (1 Peter 3:18), through His death on the cross, burial, and resurrection (1 Corinthians 15:1-4).

Jesus did not abolish the law, but He did come to fulfill it on our behalf (Matthew 5:17-20). Apart from a relationship with Him, the law remains the measure by which people will be judged God. But in Jesus Christ, the law is fulfilled for all who trust in Him for the righteousness needed to be in the presence of a holy God in heaven, righteousness that exceeds that of the scribes and Pharisees. The Pharisees were experts at keeping the external commands of the law, but this was insufficient according to Jesus. Thankfully, the Bible teaches that our righteousness comes through faith in Jesus Christ, whose perfect obedience is applied to anyone who trusts in Him alone.

“Now we know that whatever the Law says, it speaks to those who are under the Law, so that every mouth may be closed and all the world may become accountable to God; because by the works of the Law no flesh will be justified in His sight; for through the Law comes the knowledge of sin. But now apart from the Law the righteousness of God has been manifested, being witnessed by the Law and the Prophets, even the righteousness of God through faith in Jesus Christ for all those who believe; for there is no distinction; for all have sinned and fall short of the glory of God, being justified as a gift by His grace through the redemption which is in Christ Jesus; whom God displayed publicly as a propitiation in His blood through faith. This was to demonstrate His righteousness, because in the forbearance of God He passed over the sins previously committed; for the demonstration, I say, of His righteousness at the present time, so that He would be just and the justifier of the one who has faith in Jesus. Where then is boasting? It is excluded. By what kind of law? Of works? No, but by a law of faith. For we maintain that a man is justified by faith apart from works of the Law.”

Paul was uncompromising in his message. He condemned all attempts by others to add anything to it and thereby compromise the plan of salvation. He taught that any gospel that differed from the one preached beforehand to the Galatians was “another gospel” that brought God’s condemnation rather than salvation (Galatians 1:6-9).

The challenges faced by the Galatian Christians are no different than the ones faced by Christians today. There are many different “gospels” in the world that compete with and seek to drown out the real gospel. Some religious organizations believe that to become a Christian, you have to accept Jesus Christ as your Savior and follow the teachings of their latter-day prophet or prophetess, whose writings are in practice considered equal to or greater than Scripture. Or believe in Jesus plus be water-baptized, or speak in tongues, or observe certain days and festivals, or belong to their particular religious organization.

There are some who have been persuaded by groups like these that belief in the simple gospel is false and the truth is a belief that the cross is just a down payment which requires performance of rituals or observance of days and good works to pay the remaining balance. Salvation becomes not truly a free gift, but something like the purchase of a house with a bank loan. Jesus provides the down payment for the home loan, and payments must continue on the remainder of the loan in order to keep the house and prevent it from being lost to the bank. If one assumes that God’s acceptance is based on how one has been living — or any other “and” — that person either did not really understand the gospel or was misled from the true one.

In John 19:30. Jesus said on the cross, “It is finished!” The Greek text uses the word tetelestai, which means “paid in full”, not “here is the down payment”. Jesus did all the works for us without our help. He did not pay for some of our sins and then require us to pay the remaining balance with certain rituals or with good works. He paid for all our sins. Atonement for our sins was done once for all on the cross. God is not a loan company, and His grace is not a loan. His grace is a gift. Jesus did not do an incomplete work and require us to finish it.

There is no “and” in the gospel. Faith in what Christ has done plus nothing else is the good news that saves. The gospel teaches that God’s acceptance of us is not based on anything except what Jesus Christ did in our place. It means that we do not measure our closeness to God by how well we live but in what Christ accomplished for us. Christ’s righteousness in enough!