Political campaigns are like V8 engines. There are about 8 key issues in every election. The 8th cylinder is climate.

The Democrat’s V8 is running on all 8 cylinders. Not well but running. Their argument on climate is bad, stupid, and fraudulent, but it is getting votes because it is based on fear.

The Dems have captured 5 to 10 percent of the Republicans who voted for Trump in 2016.
Why? Because these Republicans think they must vote for the Dems to “save the planet.”

The Republican’s V8 is running on only 7 cylinders. They have no good argument to support their position on climate.

Some say the Dems will have a carbon tax. Trump says it’s going to get colder. But those answers don’t buy any votes because they do not remove the fear of climate change that makes people vote for the Dems.

It’s like, what do you prefer, higher taxes or death?

If President Trump gets the Climate Miracle message soon enough, he and other Republicans will win their elections.

Climate Miracle show very clearly and simply why the Dem’s climate story is a fraud. It shows nature controls the climate and human emissions are irrelevant.

Climate Miracle shows you how to remove the fear of climate change from enough otherwise conservative voters to turn the election into a solid Republican victory.

Climate Miracle is a 30-minute easy read. It uses many stories to teachesreaders about how to think.

Rather than tell you more about Climate Miracle, I will let Chapter 1 speak for itself.

Let’s drop in on a climate debate that never happened.

The fictitious debate is between Globalist Gore and Wisdom Will. It illustrates a climate debate without going deep into the science.

The key reference in this book is the United Nations (UN) Intergovernmental Panel on Climate Change (IPCC).

There are two kinds of climate scientists.

More than 16,000 scientists from 184 countries published a letter in 2017, warning that “human beings and the natural world are on a collision course.”

More than 11,000 researchers from around the world have issued a grim warning of the “untold suffering” that will be caused by climate change if humanity doesn’t change its ways. These scientists say they have the “moral obligation to tell it like it is.”

They say posterity will remember them badly if they dismiss climate change as a serious threat to our civilization.

All the scientists you reference are “effects” scientists. They focus on the effects of climate change. They tell you climate change causes bad stuff to happen. Then they scare you into believing humans caused the bad stuff.

Their science error is they assume, incorrectly, that human CO2 causes all the CO2 increase. They have no idea their core assumption is wrong.

“Cause” scientists focus on the cause of climate change. They are the physicists. And they have proved human CO2 has little effect on atmospheric CO2. (Section 2.4)

The idea that 97 percent of scientists support Globalist Gore is false, and even if it were true it would be irrelevant to science.

According to the scientific method, one proof that a theory is wrong outvotes all scientists who claim the theory is true. (Section 5.2)

There is no climate crisis. Nature controls climate.

Second, ice core data under represent the true CO2 level. Leaf stomata data and more than 90,000 direct chemical measurements show the CO2 level in the past 1200 years was well above your assumed 280 ppm. (Sections 3.4 and 3.5)

Effects do not prove their cause.

On October 4, 2020, “60 Minutes” covered the California fires and concluded human CO2 was responsible for the dry weather and dead trees that helped the fires to spread so fast.

These wildfires prove our CO2 is causing dangerous climate change. Floods, droughts, hurricanes and rising oceans are worse than ever.

We must make drastic cuts in our CO2 emissions. We must add taxes on carbon fuels that will make them more expensive than alternatives. If we don’t stop climate change, we will all perish.

The planet is warming. We caused it. We must fix it.

The “60 Minutes” show was junk science. It showed examples of weather effects.

Their expert witnesses were “effects” scientists, not “cause” scientists.

One witness claimed California’s current drought is a megadrought that occurs only once in a thousand years. But data show California had similar droughts in 1840 and 1930.

California’s drought is a result of natural climate cycles and has nothing to do with CO2. But California could have minimized its fires by clearing out dead wood and brush. (Section 6.7)

Nature controls the climate. We are not responsible. We can’t fix it.

Sorry everyone. We must take a ten-minute break because about 30 people in the audience have fainted and four appear to have heart attacks. We need time to get them medical attention.… OK, we are now ready to continue this debate. It’s your turn, Globalist Gore.

Human CO2 does not stick in the atmosphere.

We must stop our CO2 emission no matter how much it costs us.

Human and natural CO2 will behave the same because their CO2 molecules are the same. If natural CO2 sticks in the atmosphere for thousands of years, then the CO2 level would be over a million ppm. (Section 2.8)

Since that has not happened, no CO2 sticks in the atmosphere for thousands of years.

The sum of human CO2 emitted since 1750 is greater than the increase in CO2 above 280 ppm. This proves human CO2 caused the increase.

Since 1750, the CO2 level has increased as human CO2 emissions increased. This proves human CO2 caused the increase.

Globalist Gore, you should read a book on how to be fooled by statistics. The CO2 data are time series data.

The time-series trends of hemlines of New York models once correlated with the level of Lake Titicaca in the Andes. Which was the cause, and which was the effect?

There are hundreds of examples of time-series correlations that do not have any cause-effect relationship.

Statisticians detrend time-series data before doing a correlation. They have proved the correlation of annual human CO2 emissions with the annual changes in CO2 is zero. Zero correlation means human CO2 is not the cause of the increase in CO2. (Stion 3.6)

OK, OK. We must take another break. We have a few more heart attacks in our audience and a breaking riot. … OK, we are now ready to continue this debate. It’s your turn, Globalist Gore.

Most people know climate change is real. They support aggressive climate legislation to address the crisis.

Most people “know climate change is real” because our media, government, schools, colleges, and universities have indoctrinated our people for two generations. They scared them to make them believe climate fiction. Some children were so scared they committed suicide.

They make children join groupthink programs. They teach them to reject facts that contradict their groupthink belief. They taught them to ignore or attack those who opposed their belief.

They claim to be on the side of science, but they promote the false idea that the children they exploit for political purposes are climate experts.

That is not teaching. That is child abuse and brainwashing. 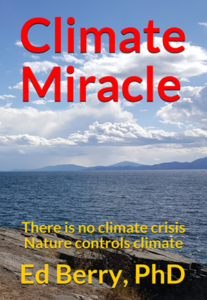 That is not true, Globalist Gore.

Dr. Ed Berry, an atmospheric physicist, out in Bigfork, Montana, calculated what IPCC scientists did not, or could not do. [This is called a shameless plug – exb.]

He had no government funding like your fat-cat scientists because our government won’t fund research that contradicts the IPCC. Berry did the calculations using Microsoft Excel on his desktop computer. He says a good high school student can do the same calculations.

Berry showed that a few years ago, when the CO2 level was 413 ppm, natural CO2 was responsible for 380 ppm and the human effect was only 33 ppm, based on IPCC data.

Nature controls CO2 and there is no climate crisis.

We don’t control the climate.

Even if we are wrong about climate science, we must do everything we can to reduce our CO2 emissions.

Economist Bjorn Lomborg, in his book False Alarm, shows that no amount of money spent on trying to control global temperature would have any measurable effect. He says adjusting to climate change is more economical and moral than trying to prevent climate change. And he even believes the IPCC climate myth.

Lomborg shows that for less than $100 billion per year – a fraction of the amount the alarmists want to spend on climate change – we can lift the world’s 650 million extremely poor people out of their extreme poverty.

Good science shows that nature controls CO2. We are not responsible for the increase.
There is no climate crisis.

Get your copy now. Available in Kindle and Paperback.