A Lot Can Happen In Three Days 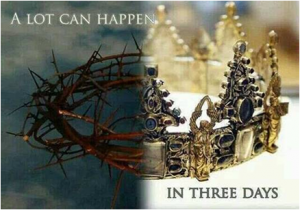 Not since early in our beloved country have we been free from fears of takeover by globalist one world order leftists who wish to destroy our God-Given Freedoms.  Those freedoms were written down on a piece of paper called the United States Constitution, all the way back in 1787, by 39 statesmen who were delegates to the Convention.

We have lived through turmoil and trials over and over again in the many years since our founders fought for and won independence, freedom and liberty.  Ours was a nation blessed by God and rewarded many times over for her goodness because of our Judeo-Christian founding.

The last many decades have seen the decline of this brilliantly founded nation, and a decline of her faith in the Almighty.  We have failed to hold true to the Word and the directions God gave us in His manufacturer’s handbook.

But God is still on the throne, He still hears and answers our prayers, sometimes with miracles, and He has everything in His Hands, and in His control.  Worry not, we are to rest in Him.  He gave us the entire story in His Word, and we well know, a lot can happen in three days.

He is despised and rejected of men; a man of sorrows, and acquainted with grief: and we hid as it were our faces from him; he was despised, and we esteemed him not.

Surely, he hath borne our griefs, and carried our sorrows: yet we did esteem him stricken, smitten of God, and afflicted.

But he was wounded for our transgressions, he was bruised for our iniquities: the chastisement of our peace was upon him; and with his stripes we are healed.

All we like sheep have gone astray; we have turned everyone to his own way; and the Lord hath laid on him the iniquity of us all.

He was oppressed, and he was afflicted, yet he opened not his mouth: he is brought as a lamb to the slaughter, and as a sheep before her shearers is dumb, so he openeth not his mouth.

Zechariah 12:10 predicts the “piercing” of the Messiah, which occurred after Jesus died on the cross.

So many more examples could be provided of Old Testament prophesies of Messiah’s birth, life, crucifixion and resurrection.

John Chapter 20 tells the story of the risen Jesus.  He is risen indeed!

Mary Magdalene went to the sepulcher and saw that the Lord’s body was gone.  She wept, and when she looked into the tomb, she saw two angels sitting at the foot and head of where Jesus lay.  They asked her why she was weeping, and she said they had taken her Lord.  She turned and thought she saw the gardener; she did not recognize the Saviour and he said to her, “Why are you weeping and who are you seeking?”  She asked, “Sir, where have you taken him?”

Jesus said to her, “Mary,” and she turned to him and realized who he was and said, “Rabboni,” which means great master or teacher, the most honorable of all titles.  She then rushed to the apostles to tell them that Jesus lives!  A lot can happen in three days!

How Times Have Changed

In the early 1960s, my high school in Park Ridge, Illinois had more than 6,000 students.  As such, we had numerous choral and music classes.  Back then, we performed Handel’s Messiah with opera singers and a full orchestra.  Tickets were sold for the program on a Saturday evening in our huge auditorium, and it was packed. I still have the record, and I still remember the words so well.  This alone tells me how much our country has changed as this would not be “allowed” in our government schools today.

Isaiah 9:6: “For unto us a child is born, unto us a son is given, and the government will be on his shoulders. And he will be called Wonderful Counselor, Mighty God, Everlasting Father, Prince of Peace.”

Sunday is resurrection day.  “O death, where is thy sting? O grave, where is thy victory?”  The Messiah conquered death for all of us who believe on Him. We rejoice!

Grief was turned to joy when the apostles realized that their Saviour was alive, He has risen indeed!  And because He lives, we can face anything that comes our way, knowing that our sins are forgiven, the final perfect sinless lamb of God sacrifice was made for us all.  Now when we approach the throne of God, we are washed clean, white as the driven snow because the blood shed by Messiah doesn’t just cover our sins, but has washed them away.

A lot can happen in just three days.  Our Christian Holy week ends with our resurrected Messiah!