A New Book: The Final Rapture

“So there I was, minding my own business…” LOL! Or so goes the old excuse. However, in this case it was true.

I was doing a prophecy conference for Prophecy Watchers back in September 2016. It would run the expected Friday through Sunday with more than 30 speakers. Now, the evening before on Thursday is when the main corridor would be completely sectioned off so that ONLY the speakers could have access in order to set up their tables with various DVDs, books, charts, etc. And I was no different; I had four boxes filled with DVDs which I had unloaded onto my two tables. Since no other speaker was around then, I jokingly said, “I don’t want to do this.” There was more than 400 DVDs to sort through and it was going to be a lot of work.

As I began to sort through hundreds of DVDs, believing myself to be alone, a very tall, strapping young man walked up beside me. I was about to turn around when I saw him suddenly pick up one of my DVDs and said: “Hi. My name is Joshua Dorlon; I’m with Charisma House publishers and my company sent me down here to offer you a book deal.” Understand, at this point I didn’t know Charisma House from Adam because I usually produce documentary films on DVDs which is what most folks prefer.

I was more than polite enough and explained to Joshua that I was going to be very busy trying to sort through and set up all of my DVDs that were sprawled all over two tables. I said we could discuss it tomorrow. Later on that evening I had looked up Charisma House on my laptop and boy was I in for a surprise. It would take me a week to explain all that I had discovered so, if you would please, follow this link and discover what I had about Charisma House http://www.charismahouse.com/

Next day I had met with Joshua at my table and we talked about the proposed book deal. As we were discussing the matter at hand one of the speakers had finished with his presentation and the room was beginning to empty out. A lot of folks had suddenly begun to flock around my table so I navigated Joshua behind my table and, while I was helping folks figure out which DVDs they wanted, or if they had already chosen some DVDs for themselves, I would politely point them to Joshua and told them that he would take their money for however many DVDs they wanted. In short, I became Tom Sawyer and put Joshua to work. Hey! Nothing like a productive Christian!

Joshua and I would have many discussions over the next three days of the conference but eventually it would have to come to an end. It would be around a month later that I would contact Maureen Eha, my soon-to-be editor at Charisma House. We had covered many details and such to where a week later I had signed the contracts and would write the book titled: “The Final Rapture”. I would shortly be introduced to others who would be part of the team that would help put together my manuscript into a book: Kimberly Overcast, Althea Thompson, Rachel Sammons, Martha McDonnough and a number of others. They are some of the most dedicated and creative folks I have ever met and, while I’m at it, allow me to personally say “Thank you for all of your hard work and efforts to put together this new book called ‘The Final Rapture’”.

We are now at the point where my new book was announced on July 3, 2017 and pre-orders could now be taken. I have already been to Oklahoma City, OK in order to shoot 8 television shows for “Prophecy In The News”. The first of which can be viewed by following this link.  I will also be doing “The Hagmann and Hagmann Report” radio show with father and son Doug and Joe Hagmann or, as I like to refer to them as “The Dynamic Duo of the Airwaves.” There shall also be a number of other rad and television shows that I will be doing but, but it will be on October 3, 2017 that my new book shall be released. 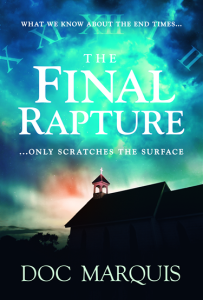 The one thing that concerned me the most when I wrote this new book was, “What about those folks in the future? They’ll need to get saved also.” Which is why I wrote a special section about how all of us can send a message into the future so that those folks can also become our new Brothers and Sisters in the Lord. I believe you’ll find this to be a very interesting approach.

Should you have any questions, please contact me @: 402-228-9476 or email me @: docmarquis777@yahoo.com. For more information about my new book called: “The Final Rapture” please follow this link to: www.itsagodthingproductions777.com You can also find me on Facebook under Doc Marquis 777 or Joseph Marquis.

Take care folks and God bless and keep all of you…Doc!

About the Author: Doc Marquis

Doc Marquis was raised as a child in the international, occult group known as the Illuminati. For 20 years he was trained as an Illuminist and attained the rank of Master Witch (a 3rd level Illuminati Witch). As a result of GOD's sovereignty and mercy, Doc became surrounded by Christians who presented him with the Gospel. Confronted by GOD's Word and love, he opened his heart and mind. On April 15, 1979 Doc became a Born-Again Christian, forever severing his ties with the Illuminati. He now devotes his life to traveling across the country and using public forums to expose and educate the public on the occult. Doc speaks at: seminars, lectures, conventions, conferences, workshops, churches, colleges and universities, and special interest groups. He also trains therapists, clinicians, psychiatrists, psychologists, local and state police, and former/present day members of the F.B.I. in the areas of victim-abuse recovery, S.R.A. (Satanic Ritual Abuse), D.I.D. (Disassociative Identity Disorder), programming/brainwashing, solving occult crimes and the eight major occult groups found in America. Television Appearance/Consulting: Doc Marquis has appeared on and consulted for: 20/20, The Oprah Winfrey Show, Geraldo Rivera, Hard Copy, Inside Edition, Unsolved Mysteries, Closing Comments, Camp Town Meeting, Thinking Out Loud, Telejournal News, Stand Up For Your Rights, The Americanist Perspective, Where is Rhode Island, We the People, Talk of the Town, Fox Television, Keep Looking to Jesus, and more. Doc has also appeared on international television programs in England, Italy, Japan, Jerusalem and Mexico. Radio Appearances: "Coast to Coast A.M. (with Art Bell), “The Hagmann and Hagmann Report” (with Doug and Joe Hagmann), Radio Liberty (Dr. Stan Monteith), “Prophecy in the News” (Gary Stearman and Bob Ulrich), “Raiders News Network” (Dr. Tom Horn), “Southwest Radio Ministries” (Dr. Noah Hutchins), “NewsWithViews” (Coach Dave) “Ground Zero” (Clyde Lewis), “Omega Man Radio”, “Let Freedom Ring," Fort Wayne, IN; "The Open Forum," Teague, TX; "Old Path Ministries," Attleboro, MA; "The Lou Epton Show," Las Vegas, NV; "The American Freedom Network," and more than 1,000 other shows throughout the world. For any information about speaking appearances or television/radio interviews, please contact Doc Marquis @: docmarquis777@yahoo.com or find him on Facebook