A Treasonous Democrat Party Aided And Abetted By A Corrupt, Biased Media

President Donald Trump’s first year and a quarter in office has been an unheralded success. Jobs have returned, taxes have been lowered, the stock market has soared to new heights, and the overall economy has notably improved.

If it were not for Trump’s successes, that is if everything in the country were failing as things were under his predecessor Barack Obama, the calls for Trump to be impeached would become shouts that would be ringing throughout the land.

The mainstream media would not report on Barack Obama as a failure, even though he was a dismal one. The same press will not report on the successes of President Donald J. Trump, even though things in America have improved drastically on all fronts.

The American leftist media has been obsessed with bringing down the presidency of Donald Trump by any means necessary. Many Americans know this, but many are still fooled by the tricks of the leftist American press corps. 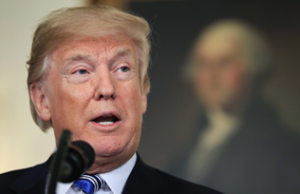 President Trump has faced endless meritless investigations involving Russian collusion to steal the election from Hillary Clinton, who the press has told us was supposed to win our last presidential election. The leftist American media is still in a state of disbelief that all the work they did in rigging the polls, declaring Hillary Clinton the sure winner before the election, was not heeded by the American public and Americans actually went to the voting booths across the nation and had the audacity to vote in Donald Trump as President of the United States!

As the Trump-Russian collusion story never had any legs to it, no evidence whatsoever, it was long overdue to die.  So, the media went after Trump in an area where they knew they could just about get any man of his stature: sex.

While the leftist American media will not let go of any conjured-up scandal about President Trump, they simply refuse to report on real actual scandals concerning their party of choice, the ones they aid, abet, and enable: The Democrat Party.

In the 1990s, President Bill Clinton was involved in a money-laundering scheme in which money was funneled to the Clintons through the Clinton Foundation from the People’s Republic of China. In exchange, Clinton gave the communist Chinese, a possible hostile foreign government, advanced U.S. missile technology.

President Clinton was also involved in an adulterous affair with Monica Lewinsky, a young intern, which was deemed “just sex” by the mainstream media.

From 2009 to 2013 Secretary of State Hillary Clinton once again utilized the Clinton Foundation as a money-laundering criminal operation, as her foundation accepted 2.35 million dollars from Russia in exchange for a uranium deal. Shortly after this treasonous deal, Bill Clinton received a bonus check of $500,000 for a Moscow speech from a Russian investment bank with links to the Kremlin that was promoting Uranium One stock.

Barack Obama’s entire presidency was a spending spree with the seeming intention of bringing down the United States of America through federal deficit spending. The federal deficit nearly doubled during Obama’s 8-years in office. Some of Obama’s stimulus spending was a favored quid pro quo, pay to play funding scheme for chosen enterprises, companies which never had any intention of using such money for the stated purposes they acquired the government funds, but would use a sizable portion of the money to make campaign contributions to the Democrat Party. The most noted of these stimulus payments went to Solyndra, a solar panel startup company, which filed for bankruptcy shortly after receiving the loan and never repaid any of the $535-million-dollar loan it received from American taxpayers.

These and many other scandals have tarnished Democrat politicians in recent decades and the leftist media may report on it for a moment, if they do at all, then move on. Not so with Republicans! Since becoming president, every woman Donald Trump has ever met is getting her 15-minutes of fame for sexual harassment claims and regrets over consensual sex decades later. Donald Trump had to seat Bill Clinton’s rape and grope victims at his 2nd presidential debate with Hillary Clinton in order for their voices to be heard!