Absolutely No Co-Existence With Islam

Time and again I have warned that Islam and the West cannot co-exist. Time and again, it was as though, I was talking to a wall. It appears it has become useless to speak of this issue. No one seems to care.

Fellow travelers, there is no “coexistence” in Islam, there is only subjugation or elimination of infidels. Islam believes in the rule of Islam, Caliphate to the Sunnis and Imamate to the Shiites. Hence, to Muslims, all other forms of government represent the handiwork of Satan and infidels. Therefore, one and all non-Islamic systems of government must be purified by Islamic fire. This is a fact.

Muslim jihadists live among us. It is only going to get worse. Jihadists consider themselves the army of Allah. They use violence as an instrument of policy. This continues to be central to Islam. Muslims war under the firmly-believed and widely-cherished set of ideas that are rabidly militaristic. No matter which side is killed, Islam is the victor, “You kill them, you go to paradise; you get killed, you go to paradise,” are two examples of exhortations to jihadism and war.

For the past twenty years or so, I have been warning to free men and women: remain a spectator at 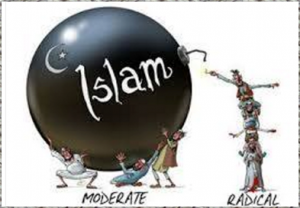 your own peril. It is imperative that you take a stand, denounce the fraud of Islam and do all you can to prevent Islamic fire from devouring our civilized democratic system. Tomorrow will be too late.

I repeat, there is absolutely no chance of co-existence with Islamic doctrine. A simple understanding is to see what is happening in Islamic countries.

Also, don’t bank on politicians, they are master practitioners of the art of the politically correct, to protect liberty. Politicians must be urged by citizens to safeguard liberty, scrutinized closely that they do the work, and are held accountable if they fail to do so. You, as a citizen, also have a job to do. Take a few minutes a day and do what you can to protect freedom. “Freedom is not free,” may be a cliché. Yet, it is the most profound four-word sentence in the lexicon of the free.

Islam was made for men. Women are playthings of men. Islam is 100% misogynist. Men are superior to women. Women are to obey men and are to be beaten when they disobey or misbehave. Islam is racist. The Quran stipulates that Arabs are superior to all others and it clearly condones slavery. It explicitly stipulates discriminatory laws for slaves. Islam denounces other belief systems and marginally recognizes the validity of only two religions, Judaism and Christianity.

The nature of Islam is based on violence. It not only condones jihad, it recommends it and promises great reward for the jihadist.

Islam is already splintered in a number of major sects and innumerable numbers of secondary sects that harbor huge disagreement and animosity toward one another as well as toward all infidels.

Those who claim that they want to reform Islam, want to transform it by stripping it of a great many provisions that are anathema to civilized humanity. These people are, in fact, trying to make a new religion out of the old with no divine authority that was, supposedly, bestowed upon Muhammad to launch his religion.

Muslims and their frequently well paid leftist apologists use the multiculturalism umbrella only in non-Islamic lands to shield themselves from the torrent of legitimate criticisms that those who know Islam better shower on this cult of violence peddled as the religion of peace.  You don’t need to listen to me, and don’t listen to these conniving dissimulators.  Please search it for yourself.  See if the euphemism of multiculturalism is ever even mentioned by any Islamic leader, is ever printed in the Islamic press, or ever appears in any form anywhere in Muslim countries.

This multiculturalism gambit in is Islam’s manufactured wool to pull over the eyes of non-Muslims while Muslims carry on with their unrelenting campaign of eradicating anything and anyone non-Islamic anywhere and everywhere in the world.

After twenty years of preaching the urgency of this threat, people have become numb.  It is past the stage of being urgent that we confront Islamic ideology and its expansionism. Close down all of its chapters across America, and declare the Muslim Brotherhood a terrorist organization. Now, it is a matter of survival. All of us must pressure our government, at all levels, to abandon the practice of “political correctness” and protect the American people and act to safeguard liberty against the truly deadly assault that is representative of Islamic ideology.

A constitutional amendment must be passed quickly defining Islam as a hostile political force with a global totalitarian agenda, and as such is totally inimical to our constitution and our national security, and that further to this definition, all practicing Muslims must either renounce this cult or be deported to their countries of origin, and all mosques must be closed down, since their goal is to propagate political propaganda, which has nothing whatsoever to do with ‘religion’ – let alone one of ‘peace’. That’s going to be the final ‘solution’ for Islam in America or face endless war.