Home/February 2021, Opinions/All will be disclosed – Nothing will be hidden – Stand fast

All will be disclosed – Nothing will be hidden – Stand fast

America has seen evidence of the international, illegal coup that stole the election from Donald Trump.  Brave attorney Sydney Powell has dug deep and exposed fraud and the illegal votes on many levels.  I shared a few weeks ago her findings of the actual Electoral College votes.  Trump had won in a landslide and Biden didn’t even get close.  Trump – 410 and Biden 128.

Though election criminals and Deep State operatives thought they had hidden the truth, it came out in the open.  What has additionally been coming out is how the Courts, House, Senate, Vice President and even Supreme Court have willfully looked the other way and allowed this illegal coup to take place.

Now, more criminals are coming into the light which begs the question.  What can we do now?  Is it all over and we must lower our heads in defeat?  Is our only option to surrender to Communist China and their bought and paid for man in the White House?

What we are seeing – History repeats itself

Click on the picture to see the video on how eazy the elections are stolen all over the country. 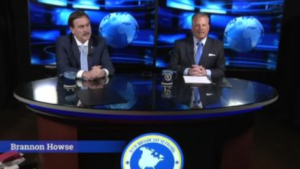 The Deep State, backed by their treasonous media and political operatives are playing by Hitler’s play book.  With their numerous evils being exposed, via some conservative journals, videos, patriots, whistle blowers and Trump supporters, we are more a more being censored into non – existence, attacked, set up and called Domestic terrorists and conspiracy nuts. This is so we can be blamed for the growing ‘false flag’ events and protests only created to blame Trump supporters and shut their voice down.

Remember how Hitler planned the attack and burning of a German Government building as a false flag event to blame the Russians and gain populace support.  The big lie Hitler had to sell: Jews and the Russians were a vial threat to Germany, freedom, their economy and safety.  They had to be dealt with severally or else Germany would be threatened and destroyed.

With an illegally placed President at the helm, Communist controlled and paid off Joe Biden, we are seeing the unfolding of the same.  However, at the same time more and more is revealed, evidence of a massive Pedophile network linking the most famous politicians, actors and others.  We are seeing their Satanist, child sex blood lust in the open more and more.

This is where some of you think I have lost my mind and believe a fantasy.  However,  8 years ago when I was hosting my national radio show I interviewed many survivors of human trafficking and sexual abuse.  I will never forget one of them whose Dad had sold her (true) into sex slavery back in Arkansas, as a small child, where she was raised to do nothing but sexually serve mostly high level politicians.  She point blank stated that Bill and Hillary Clinton had come in and sexually raped her many times.  She wasn’t yet 10 when it had happened.  Other names were also known who raped her until she was finally able to escape in her later teens.  Thank God, after decades of counseling and healing she is alive, free but still struggling.  You never get over something like this.

Trump is not the only one not finished yet.  Neither is our military and the big one – God. He is not finished yet and He has heard the cries of the precious little ones and seen the Satanic arrogance.  Expect on every level, very soon Luke 8:17 to unfold and real justice to take down the evil ones.

Do your part.  Pray, believe, don’t cower.  Wait for God’s plan to unfold.  It already is.  Get ready for unbelievable shock and Awe.  God will not be mocked and not allow His little ones or America to be crushed.