Almost Every Politician, Judge And Bureaucrat Is Corrupt

“I weep for the liberty of my country when I see at this early day of its successful experiment that corruption has been imputed to many members of the House of Representatives, and the rights of the people have been bartered for promises of office.”  —President Andrew Jackson

Andrew Jackson served two terms as president from 1829 to 1837.  He was a polarizing figure and there were many controversies throughout his presidency, not unlike President Trump.  One of the worst of Jackson’s controversies was the “trail of tears” which forcibly removed, at gunpoint, about 20,000 Cherokee Indians to Oklahoma where nearly a quarter of them died along the way.

Nevertheless, during Jackson’s campaign he promised to clean up corruption in government and restore the nation’s finances.  He managed to replace about 10% of government officers, which he called the “principle of rotation in office.”  Later, others would call it the “spoils system.”  Like today, he was unable to expose and root out systemic corruption that comes with any form of government, especially in the bureaucracy.

President Trump has tried to “drain the swamp” but the swamp is so huge and has been in place for so long, draining it is probably impossible.  With nearly 3,000,000 government employees occupying our bureaucracies and most of them graduates of our liberal colleges that openly repudiate and resist America’s founding principles, the task to drain the swamp is generational.   How do you de-program 3,000,000 bureaucrats? 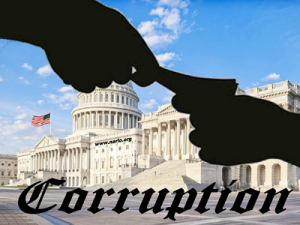 There is no way to deny that Progressivism has infected the swamp so effectively, only a replacement of at least 70% of the occupants of the swamp would sufficiently change its character.  Unfortunately, this one-sided Progressive – socialist make up of the swamp leads to corruption and abuse of power, as we discovered when acting FBI Director Andy McCabe and his two conspirators, Lisa Page and Peter Strzok, set out to cover up a crime (Hillary Clinton) and overturn a presidential election, (Donald Trump) using the extreme powers of the DOJ and the FBI.

The Department of Justice and the FBI recently unveiled a prime example of that corruption in the people.  It seems that wealthy individuals hatched a scheme to “buy” and “cheat” their children’s way into prestigious colleges.   This involved bribery, fraud, cheating on tests, falsifying records, photo-shopping and other criminal activity, in what can only be described as collusion and racketeering for personal gain.

Much of corruption becomes an integral part of a “system” because there is little to no oversight.  Congressional oversight is akin to the fox guarding the henhouse.  Patronage, cronyism, nepotism, spoils, bribery, double-dealing and other negative human characteristics drive the “system.”  Very few are watching the players of the “system” and accountability is slim to none.  The mainstream press and the people are supposed to be watchdogs of the “system”, but sadly, the press and the people have become embroiled in and are a part of the “system.”  Mostly, the people simply don’t care, except when their welfare checks are reduced or taken away.  Thus, the corrupt “system” is allowed to survive and grow, usually exponentially.

It therefore cannot be denied that almost every politician, judge and bureaucrat is corrupt because the “system” itself is corrupt.

The inescapable slide of America in the direction of all past countries, societies and cultures cannot be ignored. What usually precipitates the destruction comes on the heels of three specific growing conditions. The first condition is societal apathy, the second moral decay and the third, solidification of inflexible “systems”, leading to rapidly increasing regulations and rising government power.

The “system” is an intertwined entanglement of interlocking national and international interests of commerce, finance and trade, accompanied by government enablers of the “system” in the executive, judicial and legislative branches of government.  The tentacles of one interest are inextricably interwoven into the tentacles of all the other interests.  The “system” exists because of citizen apathy and survives, thrives and grows on the people’s money and the demands of special interests.

The collusion between corporations, unions, bankers, socialists, environmentalists and the broad category of government, at every level, are the glue that holds the corrupt “system” together.

Corruption and indoctrination have even entered public and higher education with the insidious infusion of psychoanalytical babble through Social Emotional Learning (SEL), Competency-Based Education (CEB) and Common Core State Standards (CCSS) where the curriculum focuses on attributes, mindsets, values and behavior instead of academic achievement.  Who told them they could mess with our kid’s developing minds this way?  Why have we let them?

Attorneys, judges, court clerks and tens of thousands of state and federal rules, drive the judicial “system”, such that if objective justice ever finds a court, it will have become a worldwide miracle.

Corrupt politicians whose only priority is to get elected or re-elected, drive the legislative branch of government and are part of the “system.”  Even the good politicians, if that is not a contradiction of terms, will eventually be sucked into the “system.”

The “system” gave us a news media that is devoid of objectivity and now personifies a wholly liberal “system” bias, with few exceptions.  The “system” gave us liberal colleges that now only espouse one liberal viewpoint and silences any other.  The “system” gave us radical environmentalism that tells man he is a virus on the earth and must be heavily regulated and freedoms denied.  The “system” gave us social justice, a liberal ideology that promotes and supports only the collective, never the individual, or individual rights.  Under these conditions the U. S. Constitution has become virtually meaningless and has been replaced by patronage, collusion, corruption and socialism.

Government bureaucracies are prime examples of entrenched “systems” that resist every attempt to make them more efficient, or dismantle them altogether.  As we wrote in a recent article, “since most government programs are a deep cesspool of waste, fraud, abuse and corruption, the cost versus the benefits for any government program are in all likelihood, in the toilet.”

Who runs the “system”? The “system” is run by millions of compliant flunkies who haven’t the slightest clue that they are part of a powerful, fire-breathing dragon that consumes nations, crushes individual freedom and squashes dissent.

Everyone knows that the IRS is totally corrupt, dysfunctional and in many cases, unlawful and yet it lives on. Why hasn’t Congress fixed it? Because millions of jobs in accounting and the legal arena would go away if the IRS were dismantled, or re-structured to be less complicated. Those jobs have a powerful lobby in Washington DC (the “System”) and will never let Congress do away with those jobs.

As we previously said, the “system” is supported primarily by special interests. The special interests can be money, socialism, environmentalism, welfare, land use, racism, immigration, health care, climate change, corporations, unions and even animal rights groups.  In America there are special interests for every occasion and they all have their lobbyists in Washington DC and in every state legislature, to pound on the table and demand that their pet project must be funded by YOUR money.  Our alleged representatives give in almost every time ….. for votes.

In September of 2018 your government went on an end-of-the-fiscal-year, “use-it-or-lose-it” spending spree to the tune of over $96 billion dollars for things like a $9,241 chair, China table ware at $53,004, alcohol at $308,994, golf carts at $673,471, lobster tail and crab at $4.6 million, Iphones and Ipads at $7.7 million and workout and recreation equipment for $9.8 million.  Ladies and gentlemen, this is your money they are spending and what they are doing is thumbing their collective noses at you.  They live high off the hog on your money while you sweat blood and tears to pay the taxes.  This is corruption and arrogance at the highest level.

Once again, it cannot be denied that almost every politician, judge and bureaucrat is corrupt because the “system” itself is corrupt.

If you are one of those that think Trump and his followers are the answer, you believe in mirages.  There is no way he or they can clean up the “system” alone.  He needs highly skilled and well-connected advisers and the majority of the people behind him to overcome the “system.” And even that is not enough.  America needs something else.

The “system” and the institutionalized corruption within can be defeated peacefully, just not all at once.  It has to be taken apart in small chunks.  A small group of dedicated individuals could start investigating politicians, judges and bureaucrats to uncover and expose the institutionalized corruption everyone knows is there.  But these citizen investigators and groups need a structure around which citizen investigations can take place.  We have developed such a structure, along with the organization, necessary information, instructions, processes and monetary incentives to get people motivated to do what is right so save America ….. legally!  We call this structure ORDCA and anyone with normal intelligence can do it.

Now think of the havoc we could unleash if there were 10,000 citizen investigators exposing political corruption.  Finally, politicians would begin to fear the people once again and liberty could be just around the corner.

As we have said many times before, freedom and liberty cannot exist if the people and politicians have no honor and corruption is the norm, not the exception.  We either expose corruption or in the end it will destroy us.  We can do it peacefully and legally, or we could be forced to go to war to preserve liberty.

THIS IS YOUR CHANCE TO MAKE A DIFFERENCE!   Check out ORDCA HERE.