“All animals are equal, but some animals are more equal than others.” – Animal Farm, George Orwell

On May 28th, Roseanne Barr sent out a Twitter tweet that was heard round the liberal world.
She tweeted, “muslim brotherhood & planet of the apes had a baby=vj.”

VJ is a reference to former government official Valerie Jarrett who served as the senior advisor to Barack Obama and assistant to the president for public engagement and intergovernmental affairs from 2009 to 2017.

Barr apologized for tweeting her crude remarks within 16 hours of making them with a Twitter tweet apology that stated, “I apologize to Valerie Jarrett and to all Americans. I am truly sorry for making a bad joke about her politics and her looks. I should have known better. Forgive me-my joke was in bad taste.” 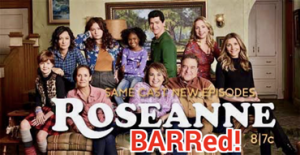 Barr’s apology was not accepted by the intolerant Liberal Left of the country, who branded her original comment as racist and hate speech. Channing Dungey, president of ABC Entertainment released a statement on May 29th that read, “Roseanne’s Twitter statement is abhorrent, repugnant, and inconsistent with our values, and we have decided to cancel her show.”

Many people believe that ABC wanted to cancel Roseanne’s top rated show, because of Barr’s political

right ideology and her support for President Donald Trump, and the tweet about Valerie Jarrett was just the excuse they needed to cover themselves for cancelling the show.

It wasn’t just Barr who was fired from her show, but all of her fellow co-worker actors and actresses, the writers, producers and everyone affiliated with the show. That’s what liberals will do. They will burn a house down and all who are in it to punish the one they disagree with.

No one defended the content of Barr’s crude remarks or bad joke, not even Roseanne Barr herself, as she did apologize for making them. What many Americans on the right political divide object to is the double standard in judging free speech.

When politically conservative people make crude, humorous, or insensitive comments about liberal, non-Christian, non-white persons, it is branded hate speech and racist, but when the Liberal Left culture makes similar jokes, and worse, against conservatives, white persons, and Christians, it is considered humor by comedians, free speech, and fair game.

It is the unfair repercussions that conservatives have to deal with and suffer as a result of taking the gloves off that has people alarmed. Liberals are permitted to say just about anything against conservatives with impunity, and if on occasion the public outcry is loud enough, then the liberal will make an apology that will be accepted by the cultural elite on the Left, and conservatives are told to accept that and move on.

Roseanne Barr’s apology was not accepted. And she had the ABC network’s top rated show. Does anybody really believe that if Roseanne was a liberal, and she compared conservative Supreme Court Justice Clarence Thomas to an ape, that she would have been fired? Doubtful. She may have been forced to issue an apology, at worst, and continued on with her top rated show and her employer at ABC.

Remember Kathy Griffin? When she posted a video of a makeshift severed bloody head which resembled Donald Trump, some of her apologists on the Left were initially defending the vile stunt as an “artistic expression” that maybe went too far. CNN announced that they were “mulling over” their options with Griffin, before it became apparent that those on the political left would not support her. Then CNN issued a stoic statement, firing Griffin from her once a year New York New Year’s Eve employment. CNN’s statement simply read, “CNN has terminated our agreement with Kathy Griffin to appear on our New Year’s Eve program.”

Compare CNN’s termination statement after being pressured to fire liberal Kathy Griffin, with the stern lecture statement that ABC gave when firing Roseanne Barr: “Roseanne’s Twitter statement is abhorrent, repugnant, and inconsistent with our values, and we have decided to cancel her show.”

Where was the expression of condemnation in CNN’s firing of Kathy Griffin?

Roseanne is a comedian just like all the late night shills who bash President Trump on an ongoing basis.

Jimmy Kimmel recently stated, “ABC decided to cancel their highest rated show, ‘Roseanne,’ following a tweet in which Barr compared an African-American woman and former advisor to President Obama to an ape, which did not sit well with ABC management or anyone with a brain really.”

Valerie Jarrett is a non-African, Middle Eastern Iranian-American woman with a seemingly white pigmented color skin tone. Liberals are so quick to play the race card, they cannot even get their facts straight before going on the attack. 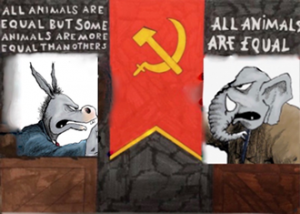 President Donald Trump has been compared to an orangutan, mercilessly and unapologetically by leftist comedians, most notably Bill Maher.

Instead, during a recent opening monologue for HBO “Real Time,” Maher doubled down and defended his comments about Trump, stating they are not the same as Roseanne Barr’s.

“One, Trump is an orangutan,” Maher said. “Two, white people have not been subjected to a racist trope to apes for hundreds of years…”

American culture is influenced, dominated, and controlled by a leftist culture that operates under the Orwellian principle, “All Americans are equal, but some Americans are more equal than others.”