Home/March 2021, Opinions/America, Do You Like Being Lied To? Kamala Harris Returns Home, Only 2 People Welcome Her

America, Do You Like Being Lied To? Kamala Harris Returns Home, Only 2 People Welcome Her

The Mainstream Media Told Us That Harris And Biden Had 80 Million Votes – Where Are They? They DO NOT EXIST!

“Power is not only what you have, but what the enemy thinks you have.” -Saul Alinsky

How right was Fredrich Douglas when he told us, “Find out just what any people will quietly submit to and you have the exact measure of the injustice and wrong which will be imposed on them.” 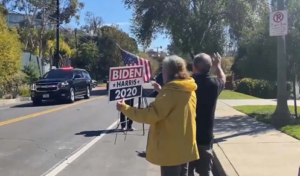 No matter how many times or how many ways you say it or share it, the people in this country blindly rally behind those who are setting the narratives (Ephesians 4:14).

By following thems, Americans are day by day adding strength to tyranny (Psalm 94:20).

Back in October of 2020, I wrote an article exposing the fact that literally, no one was there in Arizona to support either Biden or Harris (Luke 12:2).

Main Stream Media: Joe Biden Leads In The Polls – Yet, No One Shows Up To His Rallies… How Does That Make Sense?

We exposed the likes of the fraudulent Barack Hussein Obama, who DID NOT have the support of the American people (Ephesians 5:11).

We did the same with the likes of criminal Hillary Clinton.

This teaching, of course, comes from Hell’s minion Saul Alinsky, who told his followers to deceive the people into believing there are more of them than there really are.

“Power is not only what you have, but what the enemy thinks you have.” -Saul Alinsky

Reported 81 million vote recipient Kamala Harris and her husband Doug Emhoff were greeted by all of two supporters when the couple returned to their Los Angeles home in Brentwood on a sunny Friday afternoon for the first time since Harris was sworn in as vice president last month.

Video taken by a local reporter shows an older couple standing in the curb lane waving while holding an American flag and a Biden-Harris campaign sign as Harris’ motorcade drove by. The video shows no one else on the street except for a news videographer filming the motorcade.

Harris has no public events planned and is reportedly spending the weekend packing for her expected four-year stay in D.C.

In conclusion: With all of the information given to expose these criminals for who and what they are, one has to ask how it is that they are not all in jail for the crimes against the American people. How, I ask, do you help a people that do not help themselves (Amos 6:3)?  Only you can answer that!