America Is On Its Way To National Self-Destruction

Many states are in a tizzy because U. S. Attorney General Jeff Sessions has announced that the United States is going to finally enforce the Controlled Substance Act (21 USC P. 811), (CSA) with regard to medical and recreational marijuana use ….. well sort of.  Sessions left it up to the individual U. S. Attorney’s offices to prosecute, or not prosecute.  That’s all America needs right now is another “sort of” law.  After all, Hillary Clinton was only “sort of” guilty.

The cannabis smokers (mostly millennials) are up in arms for fear they might lose their marijuana pacifier high.  The money-hungry states that have legalized recreational marijuana are apoplectic over the potential loss of the marijuana tax revenue and have threatened to sue the FEDS if the Controlled Substance Act is enforced.

Washington State is pulling in well over $350,000,000 in annual tax revenues from recreational marijuana.  State Republican and Democrat legislators were equally aghast at the potential loss of that much tax money if the FEDS move forward with enforcement. 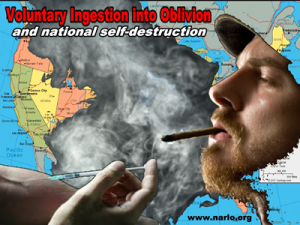 California, that just legalized recreational marijuana in 2018, is set to rake in many hundreds of millions of dollars more than Washington State.  They need that money to fund all those Democrat-sponsored social programs, the rising drug-infested homeless population, heroin injection stations and the millions of illegal aliens sucking up millions more taxpayer dollars, or killing legal Americans, as in Kate Steinle.  Meanwhile, the state of California and its people are set to get on a permanent buzz from legal marijuana.  Driving a car now becomes even more perilous.  How nice!

For decades we’ve had to deal with tens of millions of alcoholics in America and the associated costs to the public in family breakups, lost jobs, lost production, homelessness and medical treatment.  Now we can add millions more “mariholics” to the list as America proceeds towards national self-destruction.  On top of this is the opioid epidemic that’s taking 60,000 lives a year in overdoses.

Why the need to get “high” all the time?  Are we just plain stupid?  It’s kind of hard to confront your enemies, keep government accountable, or pay the bills, or drive a car when your brain cells are fried from drugs, painkillers, or alcohol.  No wonder America is falling apart.

We won’t go into the statistics on alcoholism.  They are fairly well known, as are the huge financial and emotional costs.  Millions of families are seriously impacted by alcoholism every day of the year.

In this article we will just touch on those people on drugs, any kind of drug, with an emphasis on marijuana, using statistics from 2012, 2013 and 2015.   These statistics don’t take into account the sudden explosion in opioid abuse and overdoses.

The greatest use of illicit drugs occurs in the age group from 16 to 34.  This statistic, in and of it self, is not too surprising.  That just happens to be the age group of the greatest sexual activity.  Drugs, alcohol and sex seem to be co-equal partners in the human process of procreation.   Babies and children take some of the greatest toll with babies being born addicted to drugs or alcohol.

Ironically, most other mammals of earth, besides humans, don’t seem to have that problem.  They can do it without getting “chemically” high.

In the political world of power-hungry politicians, the co-equal partners are power, money, drugs and sex, not necessarily in that order.  Money usually comes first and foremost.

In all substance use, not including alcohol, marijuana is by far the drug of choice to get high.  In fact, compared to all other artificial intoxicants, not including hard drugs or alcohol, drug users are 70% more likely to choose marijuana.  That probably accounts for the sudden rise in states legalizing marijuana.  Teenagers are the hardest hit victims.  Obviously, government doesn’t really care how “high” you get, just so long as they can tax the crap out of the substance “taking” you to new “highs.”

Alcohol is still the main driver of getting high, but the other intoxicants are growing rapidly (like marijuana, opioids and synthetic heroin) most likely due to lower costs, availability and the public’s and government’s growing acceptance of drug use.  Sadly, parents are on drugs or alcohol and grandpa and grandma are steadily losing their influence over their grandchildren, who, parroting their parents, are also getting high.

Since any and all drug or alcohol use reduces an individual’s inhibitions, the potential for jumping to another drug that produces a greater “high”, looms in the fog of inebriation.  This is especially true for the teenage years where adult maturity and consequences have not yet materialized.  Thus, marijuana being a gateway drug is not a fabrication, but a very real and dangerous possibility.  Not only that, drug use and drug addiction, grows in a society just as quickly as an infectious disease, with little natural immunity, infects the masses.

After the Great War, with life so easy and money so plentiful, whether earned or not, the tendency to indulge in getting “high”, sub-standard entertainment and the pleasures of the flesh, or even crime, grows.  If left un-corrected by morality or adversity, it expands into a run-away condition, like a train with its throttle wide open and a sharp curve in its future.

America, as a nation and as a people, is on that doomed train. With 57% of the American people (our last article) crying out for more government, the “disaster-waiting-to-happen” train is speeding up.   Sadly, not many Americans are aware of the decline the nation is in, the reasons why we are in that decline, or the ultimate demise we face.  The outcome of this folly is unpredictable.  But whatever happens, be it total financial collapse, revolution, a second civil war, or war with a major super power, the average American will be taken totally by surprise because they are either purposely or unintentionally oblivious to reality, or high on drugs or alcohol, on their way to personal or national self-destruction.

We wish we could be more positive about America’s future, but it isn’t just drug or alcohol use that is plummeting America into a steep decline.  We have outlined many of the other reasons in over 500 articles that we have written in the last 12 years that can be found HERE.  Unfortunately, the vast majority of the American people are as oblivious to the drug and alcohol problem as they are to all the other problems America faces.  All these other problems seriously threaten our economy, our financial security, America’s culture of freedom, our Constitution, our sovereignty and our very liberty.

But then hey, whose LISTENING?