Home/February 2018, Opinions/America Needs A Mindset Shift From Citizen To Sovereign

America Needs A Mindset Shift From Citizen To Sovereign

“For in reason, all government, without the consent of the governed, is the very definition of slavery.”  —Jonathan Swift

Oh how simple it was to subjugate the American people.  All it took was for Americans to think that their government was honest and trustworthy and would not break their solemn oath to preserve, protect and defend the Constitution of the United States, so help them God.  But the cold, hard truth is, a government not held to that oath by the people, is a government that will seek, by any means, absolute power.   We have 5,000 years of human history to prove that a government, left to its own resources, will, in the end, completely subjugate all who fall under its power, unless the people hold government’s power within very strict limits.

The weapon of choice for the American federal government to enslave the people has been the passing of millions [millions] of laws in open defiance of the Constitution.  The mechanics of their weapon of choice was and is using our own fear, compassion and guilty against us; fear over government manufactured crises like man-caused global warming; irrational compassion that we must attend to the needs of ALL the poor, infirmed and illegal aliens even though the cost is astronomical and there is no constitutional mandate to do so; and our own guilt to get us to comply with government socialist and environmental agendas.  Their means of propagating their method of subjugation was and is by propaganda, hype, deception and outright lies.  We wrote about these government-manufactured problems in our last article: “A Powerful Solution to America’s Frustration With Government.”  Tightening subjugation still goes on today with a vengeance.

All levels of the American Government are out of control and the people let them get out of control.  The criminal negligence of government, at multiple levels, allowed a 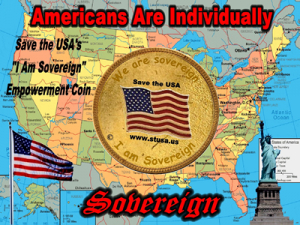 mentally deranged shooter to go into a school in Parkland, Florida and shoot 17 innocent children and wounding several more.  And we are supposed to believe that government can protect us?  They are never there when the bullets are flying.

But there was one more weapon in government’s arsenal towards subjugation.  They bought us off with our own money, such that just about every segment of the American society is taking a handout from government.  (think taxpayer – government doesn’t have any money. It seizes it by force from taxpayers.)  A handout from government is virtually the same as handcuffs on a criminal, because a handout comes with strings.  Further, a man or woman taking a government handout is not likely to “bite” the hand that feeds him or her and those in government know it, especially Democrats.

As we have written many times before in previous columns:

So now we stand at a crossroads, not un-similar to the crossroads presented to the people of the original thirteen Colonies in 1776.  Most people are unaware that in 2018, the problems with all levels of government are far more egregious than the abuses of the British government in 1776.  But the difference today is, we already have a tested blue print for freedom in place to hold government in check ….. a blue print that came at a significant cost to not only the Framers and those that fought and died to establish freedom 242 years ago, but to all those who gave their lives since then to preserve that blue print.

Comes the question, be you sovereign with all natural rights afforded to you by nature, or be you just a citizen of growing tyrannical government.  If you choose not to defend your natural rights, then by definition and action, you are a slave.

Although you may think that you are safe inside your home and the bubble that is your world, you are anything but safe when a government, drunk with power, is allowed to roam freely through your life.  The monster is at the door.  It is time to declare, be you sovereign, or be you slave.  If you choose comfort and security in place of liberty, you choose enslavement.  If you choose freedom, you will find the job before you to preserve freedom daunting, because the preservation of freedom always comes at a price.

Let’s cut to the chase.  If sovereign Americans are going to take back America and return it to a Constitutional Republic, there are only four (4) alternatives to accomplish the task.  Each of the four alternatives comes with its own risks and chances for success.  We will start with the hardest task first, having the greatest risk and no guarantees of a positive outcome.

Alternative 1.    Take up arms in a revolutionary uprising against the U. S. Government and all state and local governments:

NOT ONLY DOES THIS ALTERNATIVE HAVE LITTLE CHANCE FOR SUCCESS, it carries with it the greatest risk.  There is no way that citizens, armed only with pitchforks, pistols and rifles can have any hope of defeating civilian police forces, the national guard and the U. S. Military.  The only things gained from such an action would be to totally discredit the American freedom movement and a huge, unnecessary loss of life.  This would be the last of the four alternatives and could only be fruitful on a grand scale and only if the other three alternatives did not work.

Winston Churchill wrote:  “If you will not fight for right when you can easily win without bloodshed; if you will not fight when your victory is sure and not too costly; you may come to the moment when you will have to fight with all the odds against you and only a precarious chance of survival. There may even be a worse case. You may have to fight when there is no hope of victory, because it is better to perish than to live as slaves.”

But this is not 1776, or even 1941.  We are not fighting swords, muskets and cannons any more.  We could possibly be fighting the full force of the U. S. Military.  It would be an impossible task unless, “we had no other choice but to fight when there was no hope of victory, because it would be better to perish than to live as slaves.“

Alternative 2.    On a broad scale, withhold all forms of taxes from being collected by every level of government, from real estate taxes, to sales taxes, to license and permit fees, to the federal income tax:

It is absolutely true that the only power that government has over you is the power you give it by paying taxes to it.  Without your tax money they have no power.  The American government wastes more of your tax money on a scale greater than the gross domestic product of many countries.  Government programs are also rife with fraud, abuse and corruption.  If every conservative in America had the courage to withhold all of their tax payments, we would bring government to its knees in a matter of weeks, if not days.  But such an alternative comes with a significant risk, because if there were not a sufficient outpouring of support for this alternative, those that withheld taxes would become victims of government revenge.

Alternative 3.  Overwhelming Legislative Protest by millions of conservatives on a single issue:

There are thousands of conservative groups throughout America, supported by millions of conservative individuals.  Over 63,000,000 Americans voted conservative in the last election.  Most of those Americans live in the Heartland of America.  If the United States is shown in red and blue counties, America is mostly conservative.  It is only the high-dense urban areas that are liberal, because big cities are almost wholly dependent on government in one form or another.  If those 63,000,000 conservatives used their power to lobby government on one single issue at a time, they could turn America around in very short order.  But alas, those 63,000,000 are hopelessly divided and getting them to act as one is an impossible task.

Alternative 4.  But there is a fourth alternative that would create the least amount of disruption, upheaval and risk.  This final method is a mechanism to instill a mindset shift in millions of conservative Americans based on the unimpeachable premise that all Americans are individually Sovereign, not merely citizens of a state or the United States.  That would take a powerful image to symbolize the idea of being a sovereign, an intense education in the history of individual freedom and a considerable amount of time.  We have fully described the image and the idea in our “Save the USA” website.  If this idea went viral, it would overwhelm the political power of the left, even though conservatives are a minority.  SOVEREIGNS would be unstoppable.

Nothing else has worked for decades.  We might just re-ignite the spirit of 1776, that is if there is any spirit left in the American people.

FOR CONSERVATIVES ONLY:  If you haven’t read our “Articles of Impeachment” Petition yet, click HERE.  If you want a copy of the Petition, click HERE.