Psychologically, Islam has become part and parcel of our society and the American mind. In other words, Islam has managed to merge into Western culture as though it has always been here. Whose fault is that? Much of academia and many universities throughout the land are generously funded by Islamic governments and organizations to market a highly sanitized and distorted version of Islam to young and impressionable minds. Even at the primary school level, a hugely dishonest portrayal of Islam is included in books pupils are required to study.

In these deceptive presentations, Islam appears to be a religion of peace, tolerance, and brotherhood. To further lull the people into accepting this dishonest “taqiyya-driven” fraud, Islam is marketed simply as another version of the Abrahamic religions—Judaism and Christianity. Thus, there is nothing alien about Islam the scheme aims to promote.

Everyone knows Politicians Empower Islam. Why not? Rich Muslims contribute huge amounts of money to politicians and money talks.

“Moneyed Muslims and Muslim organizations with vast interest in promoting Islam are thoroughly familiar with the power of money to recruit people to do their bidding. That’s why many non-Muslims work at all levels of government and the society at large to further Islam. In short: they are paid to do a job.” 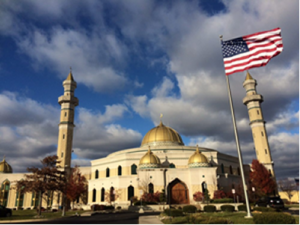 The non-Muslim world is at the end of its wits. No accommodation or kindness seems to stop Islam from growing. Islam is rapidly advancing on two fronts. In every Islamic country, it is cowing non-radicals while recruiting more and more radicals into its ranks. In non-Muslim lands, flush with petrodollars, Islam is establishing itself as a formidable force by enlisting the disaffected and attracting delusional liberals with its promises. For the faithful, there is the added incentive of Allah’s heaven and its irresistible attractions.

Dearborn, Michigan now boasts the largest and most diverse Arab community in the US, and of the city’s 98,000 residents, more than 30 per cent identify as Arab-American or claim some form of Arab descent.  Below is a photo of Dearborn, Michigan’s Islamic Center of America.

Partial-Muslims are seemingly harmless, may appear normal, and are under the radar. What gets our attention is the die-hard, the real Muslims who are a small minority. Yet this virulent combative minority is campaigning simultaneously on two major fronts. It works to herd the partial-Muslim majority into its fold and vanquish all other non-believers by any and all means necessary.

It is prudent to keep in mind that all important events in the history of humanity have been instigated by either an individual or a small group. These individuals or groups have been the sheep dogs that have directed the movements and activities of the masses, the sheep.

This is exactly what real Muslims, the Islamists, are doing in the world today. It is suicidal to dismiss the Islamists as a bunch of zealots of no consequences or as a fringe group that will burn itself out. Sadly enough, it is the bulk of Muslims that pundits portray as “peaceful” and are either irrelevant or often serve as an instrument in the hands of the Islamists. A couple of examples from recent history conclusively prove the point that it is the fanatical minorities that launch and implement campaigns that inflict immense suffering on the larger society.

In the 1930s, very few Germans were Nazis, but many basked in the resurgence of German pride and many others were too busy with their own lives to care. Thus, Germany presented a wide-open unchallenged opportunity for the Nazis to push forward their agenda and gather power to a point that it was too late for any other force to stem the tide.

And we all know what suffering this gang of radical supremacists inflicted on millions of people before their own demise.

The Khomeinism of Iran was started by a band of Shiite fanatics who rode the tide of opposition to the rule of the Shah and promised the masses Islamic Nirvana. No sooner had the Khomeinists ascended to power than they made the entire nation captive by murdering tens of thousands of complacent and late-to-awaken oppositions, imprisoned and tortured untold thousands more, and created a state of Islamic menace that threatens the entire free world to this day.

The fact is that too many die-hard Islamists continue to leave the failed Islamic states and settle in the lands of the Kefir. These new arrivals bring with them the deeply engrained hatred of infidels and believe that they are indeed the rightful owner of the entire Earth and all other non-Muslims are mere squatters that must be either subjugated or eliminated altogether.

How to stop Islam from its ultimate goal of taking over America?

A Constitutional amendment must be passed quickly defining Islam as a hostile political force with a global totalitarian agenda, and as such is totally inimical to our Constitution and our national security, and that to further to this definition, all practicing Muslims must either renounce this cult or be deported to their countries of origin; and all mosques must be demolished, since their goal is to propagate political propaganda, which has nothing whatsoever to do with ‘religion’ – let alone one of ‘peace.’

That’s going to be the final ‘solution’ for Islam in America.