America The Blessed From Ocean To Ocean

You can’t see freedom
You can only be free.
You can’t touch freedom,
It’s a phantom you see.

A phantom we hold
In our hearts and minds.
A fleeting memory we are told,
Should we it let slip away,
On the winds of time.

The Earth is but a tiny blue dot in an unimaginably large universe.  America is, or was, a bright star on that tiny blue dot.  That bright star is on the precipice of being snuffed out unless we re-ignite the energy of freedom behind that star.

Take a moment and close your eyes.  Now imagine what your life would be like if you could not see.   The Christmas tree, the smile of joy on your children’s faces when they open their presents, or a tender look from your spouse across the room that holds a world of meaning.  These would not be part of your sightless world.  You could not see the sky, or the trees, or the flowers, or the snow on the mountains, close up or far away.  You could not see the ocean, or a river, a lake, a waterfall, a desert, or the wind rustling leaves in a tree ….. or children playing.

You could not split wood, build a house, watch television, or drive a car, ride a bicycle, or go skiing, sailing, or snowmobiling, or so many other things we take for granted that the miracle of sight brings us.  In fact, your life would come with a set of chains that would take a way a portion of your freedom, the freedom of sight. 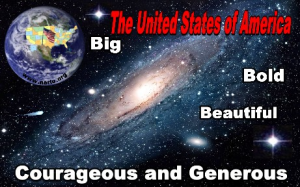 Just imagine that the joy that a young child’s innocence brings to each of us, is replaced with, well let’s just say, nothing.  Or imagine that innocence was taken away by force, or by a law that would be enforced by government.

Imagine a government that would have Christmas police roaming the streets looking for Christmas trees and colored lights, or a nativity scene, or a Menorah, or all the other things that the Christmas time of year means to our culture and then fine you or send you to jail for the violation.  You’d have to break the law, if you wanted to celebrate Christmas.  But you don’t have to imagine it, because this very thing is happening in other countries.

Stretching from the Atlantic to the Pacific, from Florida to Alaska and from Maine to Hawaii, this bright star called America is unique among all countries that have ever survived on this Earth.

Its mountains and valleys, its plains and swamps, its rivers and lakes, its deserts and canyons, provide unrivaled grandeur.

But more than that, its freedom and liberty have produced a culture of people steeped in productivity, prosperity, goodness and generosity, the likes of which have never before been seen in civilization’s rise out of the jungles and swamps of 40,000 years ago.

Long-dead cultures of Southern Europe and the Mediterranean toyed with freedom but could not hold on to it.  The Greeks, Egyptians, Romans and Ottomans rose and then fell into chaos as human avarice, greed and arrogance replaced, or never acknowledged human rights, dignity and individual liberty.

But 241 years ago, some ordinary men, with vision and the wisdom of age and experience in a time of turmoil and confusion, gathered together on the distant shores of a new land and laid down a ‘blue print’ for free men and women with common purpose and resolve to live out their lives and govern their individual and collective affairs by adhering to that ‘blue print’.

It is our firm belief that the group of individuals with the vision to start a government with its major precept being to identify, define, protect and defend the rights of individuals, may have been more than just a random happening.  In our opinion, this formation of our unique government ranks at the top of all major positive human happenings that have appeared on this Earth since the dawn of human civilization.

The basic premise behind this freedom was that individuals were to hold the rights, not the Government, and that all political power is inherent in the people, and governments derive their just power from the consent of the governed.  The framers, in creating the Declaration of Independence and the Constitution had in their minds a method by which all peoples could save, protect and defend the rights of the individual.  They called these individual rights unalienable, as endowed by their creator.  All of these rights were bestowed upon and applied directly “TO” the individual, not “FROM” the government.  It was the government’s duty to defend and protect these individual rights by each officer swearing on oath to preserve, protect and defend the Constitution of the United States.

We passionately love America.  We love its unique geography, sea to the mountains, to the shining sea again.

We love its small towns and rolling farmlands that are inhabited by gracious, productive and generous people.

We love its magnificent mountains and the vast grass plains.

We love its rivers and picturesque shorelines, where land meets ocean.  We love its varying and diverse cultures.  We love how generous we are as a nation.

But mostly what we love are the guiding principles under which America was formed.

We have a deep and abiding respect and awe for our Founding Fathers that crafted our Constitution and the Declaration of Independence under extreme circumstances.  We love that these guiding principles are what stand in the way of and shield us from socialism, communism, Marxism, a dictatorship, or an oligarchy of elite powerful men.

If we are to survive as a nation, we need to teach people, through every means possible, to exercise their right to individual expression and individual thought, whether or not that expression or thought is in the main stream.  Collectivism, the principle and religion of Progressives, is indentured servitude to the collective, not individual freedom.

Our true strength as a nation is in the strength of the individual.  We must not, as we have for the last four millennia, amalgamate, merge and level to some bell-shaped-curve average, the behavior of all individuals.

Most human achievement came as a result of efforts of and by an individual, not a society or a culture.  As a matter of fact, societies, cultures, religions and groups have stood in the way of most human achievements.  Scientific discoveries, improvement in the human condition, or positive advances in government, came about from individuals working either by themselves or with a few others.  Because of American freedom and liberty, individuals more easily expressed their natural creativity, ingenuity, industriousness and generosity.  It is because of these individual achievers that America has spread its shining light over all other nations on Earth.

If we must emulate someone, let us emulate the achievers.  If we must follow, then let us follow in the footsteps of those that pioneer and forge ahead no matter what the odds, or what peril lays in front of them.  Intelligent men and woman of vision forged the Constitution of the United States.  Courageous, individual pioneers settled the west against all odds.  Now today, the individual spirit of tens of thousands of entrepreneurs, commence new businesses every day, risking their personal fortunes, no matter how large or small.  They put up with every conceivable obstacle thrown in their path, not only from market forces, but also by government regulation and edict.  Who knows why they do it.  Perhaps if they knew what they were facing, they wouldn’t.

Efforts and achievement by individuals fuel the engine that keeps the wheels of our free economy turning.  Individuals running their own businesses create sixty to seventy percent of all jobs in the United States.  What a country we live in.  What a tribute to its resilient peoples.  We are still a people of guts, courage, intellect, enterprise and compassion.  We are individuals in a sea of individuals and there is no strength on Earth that can match ours, in spite of our perceived troubles.

America is a one-of-a-kind, precious jewel.  Defend and protect her as you would a precious jewel.  Because if this jewel becomes lost or broken, who will find her? Who will restore her?  And if we cannot find and restore her, how do we replace her, since she is one of a kind?  This jewel called America prays that we will rise up in her defense, because if America and her freedom are lost, to where will those who seek freedom run?

So during this Holiday Season and every other day, when you look up and see the American flag flying proudly in the wind as a gracious symbol of our freedom and liberty and our Judeo-Christian heritage, remember with reverence the price so many have paid to keep that flag flying high.  As an American you have every right to feel deep pride, honor and respect for a country that not only gave you life but gave birth to your freedom.  Let not any American take her for granted.

On this, our last article of 2017, allow us to wish each of you a very special, joyous and peaceful Christmas or Hanukkah celebration during this time of caring, giving and sharing.