I could go on for weeks on this subject but I will end it with this installment on the lack of integrity in our court system, even the Supreme Court, to address the stolen election of 2020. For those of you who have been paying attention, you know that the fraud that was perpetrated in the 2020 election was the worst in the history of America.  There has been ballot stuffing as long as we’ve had elections and that’s how Lyndon Johnson won his first Senate race.  When it was beginning to be exposed by non-profits Johnson attached a rider to an IRS bill that took churches and other non-profits out of the political arena.  Unfortunately, the churches didn’t have the guts to stand up to that violation of their constitutional rights.  Now, most churches are more afraid of the IRS than they are of God.  That’s why we have pansies in the pulpit today.

The fraud began when several key battleground states began to change their voting regulations weeks before the election.  Not requiring signature verification, everybody getting mail-in ballots whether asked for or not, not allowing poll workers close enough to be able to verify postage dates and the actual counting.  The recount was useless because none of the ballots was verified as required by their state law.  The big point here is it was the Secretary of State that changed the voting requirements but to change anything requirement took legislation for state legislators which never occurred.  That made the changes illegal and should have made their results void.

This same thing occurred in Wisconsin, Georgia, Michigan, Arizona, and Nevada.  Those illegal changes should have voided all those states but they were allowed anyway.  None of the states’ attorneys general would do anything about the illegal changes and none of the states’ courts would do anything either.  Can you say this was a well-organized coup?

Then we have a USPS truck driver, in a sworn affidavit, who stated he drove a truck full of ballots from New York to Pennsylvania.[1] Then that trailer simply disappeared.[2] First off, you have to ask why are there Pennsylvania ballots stored in New York?  It was also noted that there were no folds in the ballots.  This is an impossibility for a mail-in ballot.  Conclusion, fake ballot.  There were stacks of ballots with either the same name or the same handwriting on the signature in Michigan but the poll workers were told to count them anyway.[3] Aldo in Michigan it was discovered that the Dominion machines had an error rate of 68.05%: After the forensic examination of 16 Dominion Voting machines in Antrim, Co., MI, Allied Security Operations Group has concluded that the Dominion Voting machines were assigned a 68.05% error rate. DePerno explained that when ballots are put through the machine, a whopping 68.05% error rate means that 68.05% of the ballots are sent for bulk adjudication, which means they collect the ballots in a folder. “The ballots are sent somewhere where people in another location can change the vote,” DePerno explained. The allowable election error rate established by the Federal Election Commission guidelines is 1 in 250,000 ballots or .0008%. [See Video proof]

Based on the Allied Security Operations report, Constitutional Attorney Matthew DePerno states: “we conclude that The Dominion Voting System should not be used in Michigan. We further conclude that the results of Antrim County should not have been certified.[4] Notice that the allowed error rate was .0008% yet the machines were PROGRAMED for a 68.05% error rate and yet the count was still allowed.

Now we have states that are scheduling audits but the county commissioners such as the ones in Maricopa County in Arizona have fought against allowing an audit for months.  There is only one reason to fight an audit and that is you have something to hide that you can’t erase.  Most of the other states have resisted any kind of an audit as well for obviously the same reason.  We didn’t use to stand for this type of corruption.  Americans used to fight back when their rights were being flagrantly violated.  There is a movie called The Battle of Athens that every America should watch about a town in Tennessee in the late 1940s that fought back against the same corruption we witnessed in 2020. You can see it here.  I’m not advocating violence but I am advocating defending our rights.

The voice of the people was silenced in 2020 by democrat voter fraud.  It was assisted but many foreign nations including Iran, Italy with the primary culprit being China.  Our voting machines were not supposed to be connected to the internet yet China was able to access these machines and change the votes all night long as the votes were being counted.  The proof is there and was partially presented to the Supreme Court of the United States and they refused to hear the case. A slap in the face to every legal voter in America.  There was a multi-state suit filed concerning this and the highest court in the land refused to hear the case and just recently this month the Supreme Court rejected hearing another case out of 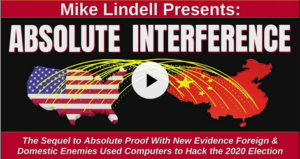 Pennsylvania.[4] America has lost confidence in our court system and our election system.  Real evidence has proven that Trump won 84 million votes and Biden received only 66 million.  The right to vote is one of the most sacred rights in America and that was take from the American people in the same manner it is taken from those that live in socialist nations.

If you paid much attention, you found that ALL of the ‘found’ votes were for Biden.  Is there any other proof needed to prove that there was massive fraud?  The evidence is overwhelming and our courts need to hear that evidence.  If you haven’t watched Mike Lindell’s Absolute Interference, take the time to do so.  It should make your blood boil.

Both the President and the vice-President have to qualify as Natural Born Citizens to hold those offices.  Biden qualifies but Harris, being born in 1964 when her parents were not citizens makes her unqualified.  She’s basically nothing more than an anchor baby.  Of course, Obama didn’t qualify either as he was never a citizen and under international law, he was a British subject just as his dad was.  We heard nothing out of the Republicans on either of these unqualified people.  The Deep State runs deep. And our nation deserves better from the people we have put in positions of authority. But then again, the people that set these people in places of authority in D.C. should be more accountable as well.  The spilled blood of the people that have defended our way of life deserves better too.