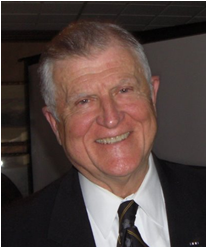 By The Honorable Allen B. Clark

I recently attended in St. Louis Mo. (September 13 to 16, 2018) the annual Council meeting of the Phyllis Schlafly Eagles. It was a wonderfully uplifting event with attendance by many patriotic Americans and even Members of Parliament from Poland and Germany. There were terrific speakers and panel participants on a myriad of issues confronting our beloved United States of America. A modest personal identification is in order, hopefully to establish my credentials and credibility. I served as a Military Intelligence officer in the Army’s Fifth Special Forces in Vietnam.

On June 17, 1967 my life was changed dramatically when my Green Beret outpost was attacked by a regular Army North Vietnam battalion with a heavy rocket and mortar barrage in which, while helping organize counterbattery fire, and for my actions receiving a Silver Star for Gallantry in Action, I sustained a wound from a mortar shell that resulted in amputation of both my legs below my knees. As an aside, I would note they were armed with Chinese Communist AK-47s, their weapon of choice. In the attached photo I myself held one of these Communist weapons,  a war trophy retrieved off a battlefield by someone else.

On the last full day of the meetings I was returning to my room, when I observed on some ground off the hotel property and next to a highway a group, which I had heard was with the infamous “Antifa.” I had seen videos of their frequent violent actions in property destruction, burning of the national colors of the country I had sworn to serve, and desire for anonymity by wearing face masks. Deciding to witness for myself what they were all about, I walked in my typical halting gait up the modest slope to where they were.

I was astounded what was happening with these people in my country on a public street! The first 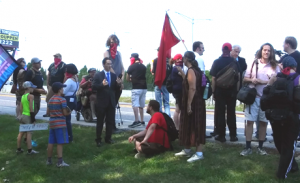 protestor I encountered I asked, as a former military guy, “Who is in charge?” One answered, “No one.” Then I walked up to an unmasked “protestor,” holding up the flag of the United Soviet Socialist Republics with its “Hammer and Sickle.” I first asked him, “What are you protesting?” Then, idiotically and sarcastically, he answered, “Beer. They are serving beer and alcohol at the event.” I commented, “I do not drink.” Then I asked the flag holder, “Why are you holding up a Communist flag?” He answered, “It is not the Communist flag. Their flag is red. This is the flag of the country with which we were allied in WWII to fight the Nazis in WWII.” (Good rehearsed retort to my question). I told him as a Vietnam veteran it bothered me in my country for someone to be holding up a flag of a country under communism that sent weapons to North Vietnam to be used against American soldiers. I told him they were our allies a long time ago and times changed.

Then my attention was directed to another masked “protestor,” to my left. To my utter amazement and disgust, along with several others, he was wearing a t-shirt that had emblazoned across it “Marxist.” Having just studied “Marxism,” the rise of the workers in the Bolshevik Revolution, and, having heard a panelist speak of the 200 million deaths under Stalin’s brand of Communism, I was taken aback. (Do not let these proponents and supporters of “Antifa” confuse the issue, in this “old soldier’s” mind and “young patriot’s soul,” Marxism, Leninism, socialism, and communism all want the same result, the subjugation of the people and the loss of individual freedom). Then this Marxist asked me why we went to Vietnam. I answered, “I am not totally sure on this, but I am doing some research to answer that.” I told him the reasons for the Vietnam War are a separate issue from the sacrifice of our veterans.

Then another chimed in that he was an anarchist. They were barraging me, but as a long-ago college debater, I selectively listened and addressed what I picked up on. The “beer” guy interjected again something about beer. I commented, “Many veterans like beer.” (Another reason for us not to support these guys! They are protesting our drinking habits! The beer drinkers of America must understand one of the planks of Antifa. Perhaps they like Russian vodka.)

Then I asked the flag holder why he did not wave the American flag? He said it was his right to do so because it was a free country. (Of course, if Marxism, prevailed, he could not carry Old Glory). I then redirected a question to the “masked man” why he wore a mask. He replied it was for their protection because they had protestors at their homes and said that could happen to me. I said it better not, because I knew too many Special Forces men and SEALS! Then as they were prone to do, one changed their line of attack once more, “Did you know there was a German in our conference?” (True). Then in a twisted sense of logic said, “The Germans in the (far right) protests in Chemnitz were raising their arms in the Nazi salute.” (Implying of course that our distinguished and gracious German visitor was in that group also raising his arm in the Nazi salute). I said I did not agree with that. (Naturally it is a recognized technique of the enemies of our society to draw conclusions in circuitous logic without factual backing). When I mentioned this comment to our German participant, he shrugged it off. He is no Nazi.

He and the also distinguished Polish visitor care about the preservation of the Christian roots of their civilization based on Roman law and Greek philosophy. Next, I told the masked Marxist, “You live in America and you wear that shirt!” Upon this I had enough. For whatever reason, my better angels prevailed, and I shook hands with about three of them in front of me and said, “God bless you.” If they stay on this track, they are going to need some blessings from God, because all they deserve from people like me is total disgust and disdain. I then returned to the safe confines of the line of protection of our Men in Blue outside the hotel.

[Author’s conclusions: These young people (I only faced maybe five of the twenty there) are either playing a game, or have been radicalized by liberal professors, or are paid protestors, or more dangerously, truly believe in Marxism and the socialistic direction of Russia. It decidedly was an interesting exercise. Besides interrupting me (and then I asked if he would extend the courtesy to me of allowing me to finish my words), at no time was I physically confronted by them, nor felt any fear. They reminded of the young men in my first platoon I led in 1963, but these guys needed education, short haircuts and shaved faces!]

[BIO: “The Honorable Allen B. Clark, a 1963 graduate of West Point, was retired as an Army captain in 1968 after a fifteen month hospitalization at Brooke Army Medical Center in San Antonio. He was wounded in an enemy mortar attack on June 17, 1967 at Dak To Special Forces camp near the Tri-Border area in Vietnam’s Central Highlands. He has endured twenty surgeries with approximately 150 stitches and his bout with Post Traumatic Stress caused in 1968 a fourteen week stay in a closed psychiatric ward. By the grace of God Allen was healed in the mid-1970s and has been antidepressant free with no further psychiatric treatment needed. In the action in which he was wounded he received the nation’s third highest award, a Silver Star for Gallantry in Action and a Purple Heart.

He has served at the national Veterans Affairs Department as an Assistant Secretary for Veterans Liaisons and Program Coordination and Director, National Cemetery System, both requiring U.S. Senate confirmation votes. He was recognized in 2011 as the Outstanding Veteran by the Texas Department Disabled American Veterans. In 2018 he was recognized by the Greater Dallas Military Foundation with its Patriot of the Year Award at their annual gala. His lay ministry to veterans is at www.combatfaith.com. He has authored two books, Wounded Soldier, Healing Warrior and Valor in Vietnam: Chronicles of Honor, Courage, and Sacrifice. His third book with expected publication on Veterans Day 2018 is Soldiers’ Blood and Bloodied Money. His email is greenbrt2@aol.com.”]