Congress shall make no law respecting an establishment of religion, or prohibiting the free exercise thereof; or abridging the freedom of speech, or of the press; or the right of the people peaceably to assemble, and to petition the Government for a redress of grievances.  —The First Amendment of the Bill of Rights – The U.S. Constitution

…the Communists everywhere support every revolutionary movement against the existing social and political order of things… They openly declare that their ends can be attained only by the forcible overthrow of all existing social conditions.  —Karl Marx and Frederick Engels, The Communist Manifesto, published in 1848

We’ve seen the clenched fists of the communists as they assemble to cause mob violence, destruction and havoc.  The clenched-fist salute has been used among revolutionaries for many centuries as a symbol of defiance, comradeship, and solidarity. It was employed during the bloody French Revolution of 1789, and again during the industrial revolutions of 1848.

It is the same clenched fist seen in the Russian Revolution of 1905 when a wave of mass political and social unrest spread through vast areas of the Russian Empire.  The rage was directed at the government, the Tsar, the church and other conventional authorities.

Vladimir Lenin’s Communist Russian Revolution culminated in 1917 when the Tsar became the U.S.S.R. (Union Soviet Socialist Republics). In July of 1918 Tsar Nicholas Romanov and his family were executed on the orders of Bolshevik leader Vladimir Lenin.

Lenin as head of the USSR called the 1905 Revolution a “dress rehearsal” without which the “victory of the October Revolution in 1917 would have been impossible.” 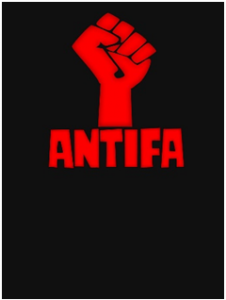 In recent history, the communist clenched fist has been used by the Black Panthers, Black Lives Matter, AFL-CIO labor union members, Occupy Wall Street activists, Marxist-Leninists, including members of the Communist Party USA and the Revolutionary Communist Party, and now by the ski-masked Antifa thugs of the Democrat party.

Antifa promotes a blend of anarchy and communism, and was formed in 1920s Germany as the violence and intimidation wing of the Communist Party of Germany. The organization was initially part of the Soviet Union’s front operations to bring about communist dictatorship in Germany, and it worked to label all rival parties as “fascist.”

In this picture, German members of Antifa, a Soviet front group that carried out violence and intimidation, give clenched fist salutes on September 1, 1928.

The Soviet Union was among the world’s most violent dictatorships, killing an estimated 20 million people, according to “The Black Book of Communism,” published by Harvard University Press. The Soviet regime is second only to the Chinese Communist Party under Mao Zedong, which killed an estimated 65 million people.

The Antifa organization can be traced to the “united front” of the Soviet Union’s Communist International (Comintern) during the Third World Congress in Moscow in June and July 1921, according to the German booklet “80 Years of Anti-Fascist Action” by Bernd Langer, published by the Association for the Promotion of Anti-Fascist Culture. 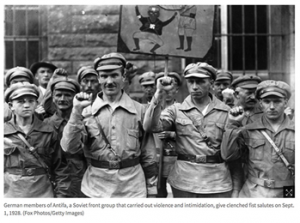 Both the communist and fascist systems were based in collectivism and state-planned economies. Both also proposed systems wherein the individual was heavily controlled by a powerful state, and both were responsible for large-scale atrocities and genocide.

If you think it can’t happen in America, just look at who is funding these anti-American mobs bent on the destruction of America’s Constitution, her culture and way of life.  She is under siege by a group of masked, black-clad protesters known for using extreme violence and intimidation to silence conservatives and they have an agenda promoted and funded from behind the scenes.  The Revolutionary Communist Party (RCP) is a large central player in Antifa violence.

Peaceable assembly is what our Constitution allows, but we’re seeing mobs of hate filled Soros paid propagandists who will attack and purposely injure both law enforcement officers and Americans who have opposing political ideologies.  The Los Angeles Times editorial board called Antifa, “traitors to the thousands of peaceful demonstrators who gathered in Berkeley’s Martin Luther King Jr. Civic Park to counter a ‘No to Marxism in America’ rally” and called the group’s actions “thuggery, not activism.”

In North Dakota, for instance, Antifa  tried to block the Dakota Access Pipeline by burning and bombing bridges, threatening local residents and killing cattle. One “peaceful protester” tried to shoot a deputy sheriff.

The left’s rage against conservatives is much more strident and rabid than that of the right against them.  Their nihilistic narrative lends itself to distorting reality. Our social fabric is torn, and as such, many writers believe we are headed for a new civil war.  But it is not a civil war we’re headed for…it’s another communist revolution, one like 1917 Russia, and this is their “dress rehearsal.”  This is the new Red Army of Revolution, and they’re armed.

Donald J. Trump upset the globalist New World Order apple cart big time.  Their plans of leveling America into a third world country they could easily control have been thwarted by American voters, at least for a time.  All restraint has been lifted, the socialist Democrats are showing their true colors. 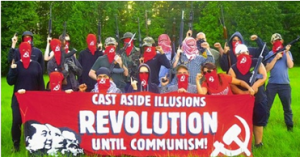 Hillary says that the Republican party is “ideological” and “driven by the lust for power.”  Hell yes, we’re ideological. We love the Constitution and the liberty our Founding Fathers fought for; they succeeded in removing the shackles of tyranny. And all along the way, Liberty’s lantern was their guiding light.  It is your communist democrat party Hillary that has the lust for power and will use obscene and vulgar actions against the Trump administration and his supporters.

We never saw violent mobs attacking Obama and his administration during his eight-year reign. So, Hillary, who is really driven by the lust for power?

What an irresponsible statement!  She’s saying that violence by the left will continue until the Democrats regain power.  She is promoting anarchy because they want their totalitarian societal control returned.

Breitbart’s article of October 17th exposes the Soros funded Rockwood Leadership Institute where political communists are trained. Florida gubernatorial candidate Andrew Gillum graduated from the Oakland, California-based training school for progressive revolutionaries that has spawned a list of activists who have gone on to become the who’s who of the far-left leadership world, with many taking senior positions at organizations financed by billionaire George Soros.

Fighting Back Without Violence

Congressman Steve Scalise had his own near-death experience at the hands of a deranged Bernie Sanders supporter who sought to assassinate a baseball field full of Republicans. In his recent Fox News article, he lists a growing number of violent or threatening actions taken against conservatives by Democrats.  The threats are beyond hateful.  Scalise says, “In America, we win battles at the ballot box, not through mob rule or intimidation.”

A new one-minute Republican ad calls attention to the left’s promotion of violence against those who do not agree with them.  The ad comes after several violent attacks have been launched against Republicans in recent days, including:

Antifa is planning a November 4th, 2018 Communist Revolution throughout America almost exactly 100 years after the Bolshevik Revolution that took Russia out of the frying pan of Tsarist rule and into the fire of communist totalitarianism. 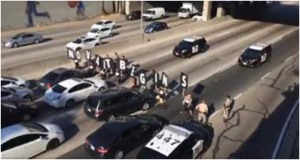 On Tuesday morning, September 26, the Antifa group Refuse Fascism blocked rush-hour traffic on the 101 freeway in CA for about a half an hour.

Stretched out across the highway, holding signs spelling out, “NOV 4 IT BEGINS,” eight people chanted slogans such as “No Trump, no KKK, no fascist U.S.A.” and “Whose streets? Our streets!” Many others lined the areas above the freeway, holding banners demanding an end to the “Trump/Pence Regime” and shooting video of the blockade. Link

Jim is right, and it would be wise for all Americans to be prepared and armed…and know how to use their firearms.  This is not just opinion, it is factual.  We don’t want a revolution, we still want the ballot box, not the cartridge box, but patriots must be prepared.