Home/November 2017, Opinions/Armistice Day, Poppies, And Why The Act Of Remembrance Matters

Armistice Day, Poppies, And Why The Act Of Remembrance Matters

Courage is almost a contradiction in terms.  It means a strong desire to live taking the form of readiness to die. —G.K. Chesterton

I stand ready, not for politics, or for leaders.  But for my brother next to me, my children at home, and for a country I protect. —United States Soldier

A few years ago, I was in physical therapy for rotator cuff surgery, and there was a young girl in training with my therapist. My therapists were the greatest folks you ever wanted to meet, and they both were patriotic and informed.  As I was being worked on, the young trainee was there watching, and my therapist said he’d been educating her.  I asked her a few questions about American history.  I asked her who we fought in WWI, WWII, Korean War, Viet Nam War, Desert Storm, and even the Revolutionary War and she could not answer even one.  My therapists knew the answers to all of my questions.

When I got into my car to go home, tears ran down my cheeks because I knew the government schools were not teaching our children American history and the freedoms of our country.  As a youngster, I spent summers and holidays with my grandparents on their dairy farm in northern Indiana.  I clearly remember the trips to Pine Lake Cemetery to decorate the graves for Decoration Day, which is now a three-day holiday and has been changed to Memorial Day.  The same occurrence happened on Armistice Day, which is now Veterans Day. I remember well in school being told to stand with my hand over my heart, for a minute of silence for those who lost their lives in WWI and WWII.

Most of my generation know the truth of our nation, a nation founded by statesmen who knew freedom and liberty and fought for it.  We have something no other nation on earth has ever had, blessed by God, and given by men who chose independence, sovereignty, individual self-sufficiency, and above all freedom and liberty.

I am blessed to have been born in this nation and lived through some of her greatest years.  It is why I fight for our country, why I honor her soldiers, and why I love our Constitution and our God given freedoms. 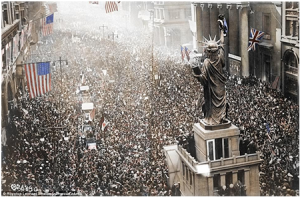 My paternal grandfather graduated from the Presidio in 1917 and went to war in France for two years with the Army Cavalry.  He had degrees in both international law and French.  His older brother was also in the war.  Grandpa remained in the Army cavalry for a good number of years, and then retired.  When WWII started, he re-upped at age 50, and was in charge of a German prisoner of war camp and then the MPs at Nuremburg.

The other side of my family were also in WWII, one of my uncles actually hitchhiked across Czechoslovakia to meet up with his cousin.  My other uncle was in Germany, and my Dad was also in the European theatre. 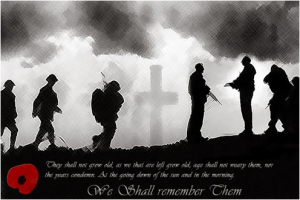 We Shall Remember Them

Veterans Day is a U.S. legal holiday dedicated to American veterans of all wars. In 1918, on the 11th hour of the 11th day of the 11th month, an armistice, or temporary cessation of hostilities, was declared between the Allied nations and Germany in World War I, then known as “the Great War.”

November 11th became known as Armistice Day.  It was President Woodrow Wilson who made the declaration in 1919.  The total number of military and civilian casualties in World War I was more than 41 million: there were over 18 million deaths and 23 million wounded, ranking it among the deadliest conflicts in human history.

It is hard to say with exact certainty how many people were killed during World War II, but estimates vary between 50 million to over 80 million. One thing that everybody agrees with is that it has been the deadliest war ever, wiping out around 3 percent of the world population at the time.

In 1945, World War II veteran Raymond Weeks from Birmingham, Alabama, had the idea to expand Armistice Day to celebrate all veterans, not just those who died in

World War I. Weeks led a delegation to Gen. Dwight Eisenhower, who supported the idea of National Veterans Day. Weeks led the first national celebration in 1947 in Alabama and annually until his death in 1985.

President Reagan honored Weeks at the White House with the Presidential Citizenship Medal in 1982 as the driving force for the national holiday. Elizabeth Dole, who prepared the briefing for President Reagan, determined Weeks as the “Father of Veterans Day.”

Commemorated in many allied countries as Armistice Day, November 11th became a federal holiday in the United States in 1938. On May 26, 1954, President Eisenhower, in the aftermath of World War II and the Korean War, declared that Armistice Day was legally known as Veterans Day.

In the U.S., Veterans Day was moved, by a 1968 act of Congress, to the fourth Monday in October. This shift of Veterans Day, as well as similar moves for Washington’s Birthday, Memorial Day, and Columbus Day, started in 1971 and was designed to create a three-day weekend for government employees.

The Veterans Day long weekend, though, was resisted by many states, localities, and veteran’s groups.  In 1975 President Gerald Ford returned Veterans Day to November 11, due to the important historical significance of the date, and I believe that’s where it should remain. 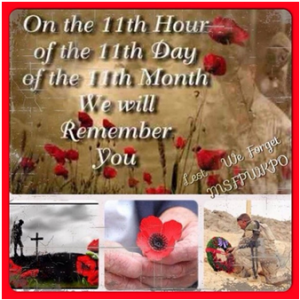 The Story of the Poppy

My momma used to grow poppies and long ago she told me the story of Flanders Field.  Apparently, poppies only grow in the absence of other flowers and in ground that has been tilled.  Dr. John McCrae observed poppies growing between the crosses on soldiers’ graves, and it inspired him to write the poem, In Flanders Fields.  The poppy has since become known as the “The Flower of Remembrance,” and is worn in memory of our veterans.

When you’re driving around town on Veterans Day, and the men in the middle of the roads are selling poppies, buy one, wear it in remembrance, and give the much needed funds to support our disabled and hospitalized veterans.  Celebrate the lives who fought for our nation, those who came home, and those who made the ultimate sacrifice.  God bless and keep them all!

P.S. Please don’t forget NewsWithViews during the upcoming Holiday Season.  We rely on our readers to help us stay solvent so we can continue to bring the truth to you every day.  All of us at NewsWithViews research and write articles because of our love of country and we are led by God to do so.  We count on the generosity of our readers and those of you who send monthly donations.  Here is how to donate.  Thank you and God bless.