Skip to content
Home/July 2017, Opinions/Betrayal At The Highest Level By Former US Officials

Betrayal At The Highest Level By Former US Officials

America: The Enemy of My Enemy Is Not My Friend

American politicians sometimes wonder why people of other nations show contempt toward America. Perhaps this article will shed some light in the understanding of this enigma.

A few years ago, several high ranking American and European officials and dignitaries attended an NCRI (National Council of Resistance of Iran) rally held in Paris. 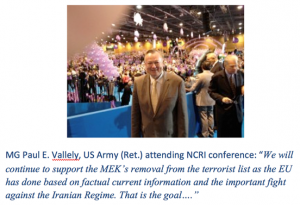 The invitees included MG Paul E.Vallely, US Army (Ret.), former Ambassador to the UN John Bolton, former New York City Mayor Rudi Giuliani, former Speaker of the House, Newt Gingrich and several others. The participants gathered in a conference room supposedly to support Iranian Opposition Groups. Here is the problem: NCRI is not representative of an opposition group, in fact, NCRI is an offshoot of the MEK, (Mujahidin Khalq) organization, a devout Islamist-Marxist entity known for their ISIS style terrorism. 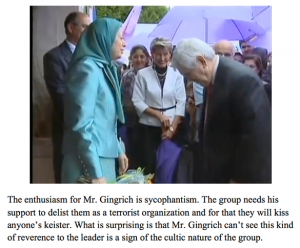 Both NCRI/MEK are controlled by Masoud and Maryam Rajavi, a brutal couple who are no strangers to torture, terror and assassination. They both are responsible for numerous killings of Iranians and even murdering and abusing members of their own group for trying to defect or escape from the MEK (Camp Ashraf in Iraq).

After long and arduous bickering between MEK and Iran’s new leader, Ayatollah Khomeini, Masoud Rajavi, the leader of MEK started a series of bomb campaigns against the newly formed Islamic government. In 1981, it attacked the headquarters of the Islamic Republic Party, killing 74 senior officials including the party leader and 27 members of Parliament. A few months later it bombed a meeting of Iran’s national security council, killing Iran’s new president Mohammad-Ali Rajai and his Prime Minister.

To save their lives, Masoud and his companions were forced to flee Iran to Paris. But, the French government expelled the MEK leader, Masoud Rajavi, in 1986. The group then ran into the arms of Iran’s arch enemy, the Iraqi dictator, Saddam Hussein. Iraq provided MEK thousands of fighters, artillery, guns, tanks and then housed them in three camps near Baghdad and along the Iranian border. Baghdad also provided money for the group. Saddam Hussein allowed the Iranian exiles, members of the Mujahedeen-e-Khalq (MEK), to set up their paramilitary base at Camp Ashraf in the 1980s. The dissidents oppose Iran’s theocratic regime. 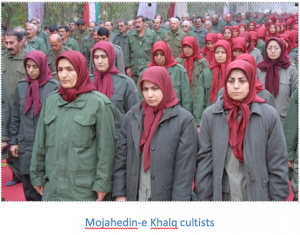 According to Human Rights Watch who interviewed several former MEK members, the organization is a cult that has kept its members virtually imprisoned in a compound in Iraq and controlled them psychologically. They eliminated anyone who expressed their intent to leave.

A RAND report commissioned by the US DOD found that the MEK is a cult that utilizes mind control and practices mandatory divorce, celibacy, authoritarian control, forced labor, sleep deprivation, physical abuse and confiscation of assets.

The FBI reported that the MEK’s “NLA [National Liberation Army] fighters are separated from their children who are sent to Europe and brought up by the MEK’s Support Network. […] These children are then returned to the NLA to be used as fighters upon coming of age.  Interviews also revealed that some of these children were told that their parents would be harmed if they did not cooperate with the MEK.”

In a seminar held in Paris ex-MEK members recounted tales of horror from Camp Ashraf, Iraq where their members are kept without any communication with their relatives for decades, they are ordered to divorce, and Masoud Rajavi had sex with female members of those within the cult. 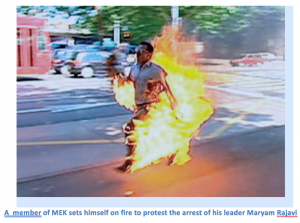 More evidence of the cultic nature of MEK came to light when in 2003 the French police arrested Maryam Rajavi for terrorist charges. The group reacted in a manner consistent with its cultic nature. Ten of them set themselves on fire to protest their leader’s detention.

At one point, the US State Department labelled the MEK as cutting a “swath of terror” across the country in the following years and of “violent attacks in Iran that victimize civilians.”

“Since 1981 the MEK have claimed responsibility for murdering thousands of Iranians they describe as agents of the regime,” the report said.

Ideologically, the MEK initially sought to blend revolutionary Marxism with Islam. That’s why they are routinely referred to as an Islamist-Marxist organization. The group was shaped in the 1960s by leftist Iranians (supposedly) students opposed to the Shah’s regime. The MEK is responsible for the killing of six Americans in Iran during the 1970s. They included three military officers and three men working for Rockwell International, a conglomerate specializing in aerospace, including weapons, who were murdered in retaliation for the arrest of MEK members over the killings of the US military officers.

The MEK was also responsible for support and seizure of the US embassy in Tehran following the Iranian revolution.  During the 1980s and 1990s, the MEK fought as a private militia on behalf of Iraqi leader Saddam Hussein against the Islamic Republic of Iran. (IRI). That angered the Iranian people and they called them traitors.

US Invasion of Iraq

Interestingly enough, in 2003, the MEK’s position became very weak when the US and its allies won the Persian Gulf war and entered Iraq. They made a 180-degree change in their attitude and suddenly, these Marxist terrorists declared they would no longer resort to violence (after being disarmed by the American military and not within the camp) and cast itself as supporters of the democratic opposition in Iran. Not everyone bought the group’s transformation into defenders of liberty, secularism, and women’s equality. Of course, no one believed the cult leader, Masoud Rajavai.

In April 2003, US forces signed a cease-fire agreement of “mutual understanding and coordination” with the MEK. Finally, in May 2003, as a result of negotiations between the MEK and US forces led by General Ray Odierno, the MEK agreed to a “voluntary consolidation” and disarming of its forces in exchange for US protection of Camp Ashraf and its residents.

In 2003,  New York Times reporter Elizabeth Rubin visited the group’s Iraqi compound at Camp Ashraf and described it as resembling a “fictional world of female worker bees … dressed exactly alike, in khaki uniforms and mud-colored head scarves, driving back and forth in white pickup trucks, staring ahead in a daze as if they were working at a factory in Maoist China.” 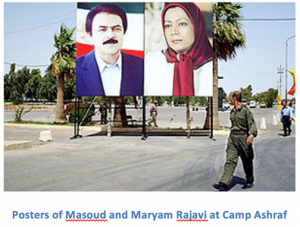 As soon as the U.S. troop pullout of Iraq began in 2008, the pressure began to mount on the MEK. The Iraqi government officially ordered that they needed to take over security at Camp Ashraf because the MEK was a “terrorist organization.” Gen. David Petraeus insisted that they were “protected persons” and U.S. forces would defend them. But Prime Minister Nuri al-Maliki declared his intention was to “put an end” to the MEK.

Once all U.S. combat forces had left Iraq, he demanded a joint Army and police attack on the camp. In July 2009, U.S. military observers watched desperately as Iraqi forces overwhelmed and then attacked the camp, killing 11 residents (six were shot, the others beaten to death) and wounding hundreds. The operation was apparently intended to terrify the residents into leaving voluntarily, but instead it steeled their resolve. 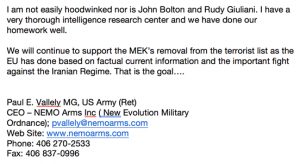 The MEK has a great deal of money and with that, undeniable political connections across the globe, and this is the one thing it has in common with the Islamic Republic of Iran (IRI).

Regrettably, because of these political networks and monetary support, the MEK and its leadership was able to enlist the support of Secretary of State, Hillary Clinton and have her take them off the list of terrorist groups.  Another reason was they were reportedly passing information from their supporters within the Islamic Republic on nuclear facilities to the U.S. intelligence community and according to some reports, cooperating with the Mossad to assassinate Iranian scientists.

Both Americans and Iranians desire regime change in Iran, but for different reasons. While America wants to remove a threat in the region, the Iranians want democracy.  These two are not mutually exclusive and America would commit an unforgivable sin if it ignores the wishes of Iranians once again.

America’s collusion with the MEK, one of the most dangerous terrorist groups is devious and a blatant double standard.  This is worse than the instalment of the Ayatollah Khomeini by former President Jimmy Carter. It is unfathomable how on the one hand, America claims to be fighting against terrorism and on the other, supports it by aligning itself with the MEK.  What Iran needs is freedom and democracy, not another MEK led dictatorship.

It is the democracy-seeking secular Iranians who are thoroughly capable of dislodging the tyrannical Mullahs. The call of the opposition should be resoundingly answered by President Trump and all other nations and leaders, not only for humanitarian reasons, but in furtherance of their own national security interests.