Half the people in America scratch their heads in wonderment concerning the Biden Administration.  How did Joe Biden, after 47 years of accomplishing about as much as a chicken scratching in the dirt for worms, ascend to the presidency of the United States?

It brings to mind the story of the “Post Turtle.”  An old Virginia farmer sat in his doctor’s office when the doc asked him his opinion about Joe Biden and his role as our new president.

Not being familiar with the term, the doctor asked him, “What is a ‘post turtle’?”

The old man said, “When you’re driving down a country road and you come across a fence post with a turtle balanced on top, that’s a ‘post turtle’.”

The doc looked puzzled, so the farmer explained, “Well, you know he didn’t get up there by himself. He doesn’t belong up there. He doesn’t know what to do while he’s up there.  He‘s elevated beyond his ability to function, and you just wonder what kind of a dumb ass put him up there in the first place.” 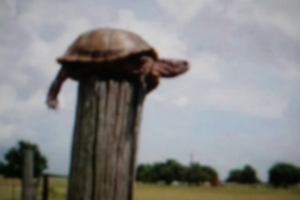 (This, my friend, is a picture of a Post Turtle.)

As Joe Biden’s senility and onset dementia progress, along with his physical exhaustion and mental confusion—his cabinet will cover for him. No one will expose him, but he will slowly expose himself with each interview in the ensuing months ahead.

Don’t you find it extremely odd that Biden holed-up in his basement for most of his campaign?  Wasn’t it curious that his rallies featured 20 to 50 people?  In several of the rallies this journalist witnessed, the camera crews numbered greater than the audience.

On one particular interview that I watched, he fell asleep.  On The View TV show, he rambled on incoherently, so much so, two of the women turned their eyes and were aghast at his non-sensical babblings.

As I watched the democratic debates leading up to the elections, Tulsi Gabbard, Marianne Williamson, even the gay mayor from Ohio made more sense, spoke more intelligently and appeared more in touch with reality.

As has been his claim for 47 years, Biden repeated his usual four decades of ‘turtling around’ in Congress as his foundation for his credentials to solve America’s problems.

Somehow, somewhere, someone started pulling the levers of power to persuade democrats to vote Joe Biden into the front runner position.

He told the world that every person who was Black must vote for him, or they weren’t Black.  He called Trump a racist, sexist and several other names.

At the same time, Biden’s history showed a man who played four years of varsity sports in high school but avoided the draft with a claim of ‘asthma’.  He lied about having earned three degrees from three different colleges.  He got caught plagiarizing other writers.  He became a blow-hard in Congress who did little during his tenure.  At the same time, in the 1980’s, he didn’t support bussing his kids into the inner city because he didn’t want them to be bussed to “the jungle” meaning those schools were loaded with Blacks.  He supported the KKK clan member U.S. Senator Robert Byrd of West Virginia.  He avoided a rape accusation, but is still being accused by one of his congressional aides, Tara Reade.

Finally, his most egregious criminal act which will be buried: he used his vice-presidential status to secure a job for his son Hunter Biden in a Ukrainian oil company for $50,000.00 a month.  His son wouldn’t know an oil well from an erector set.

What’s so amazing about all of these documented facts?  Answer: Biden just got elected to the highest office in the land.

Does that mean the majority of the American people voted for a man who will soon be ushered into an Assisted Living Home?

In the coming  months, we may expect some of the most bizarre statements from Biden.  When his speaking becomes too erratic and non-sensible, his handlers will shield him from press conferences, keep him out of the public, and eventually all of them will have to yield to the 25th Amendment and declare him unfit.

But wasn’t that the plan all along?  Someone chose Kamala Harris to be president of the United States.

Right now, in 2021, we accelerate into being a confused nation.  We’ve got 45 million foreign born. We’ve got 25 million illegal border jumpers. Spanish is taking over in the four border states.  We groan under a $26 trillion debt. We allowed 114,000 military veteran suicides in the past 20 years while paying $6 trillion for two useless and insane wars with the Islamic world 10,000 miles away.   We’ve got ½ of our citizens opposed to the other ½ of our citizens.  We’ve got BLM, Antifa, NBA and the NFL standing against our national flag and way of life.  We’re watching our culture, flag and language being shredded into being guilty for being the most successful civilization on Earth.

In 2020, we imported over 1.5 million more third world immigrants on our way to 100 million more of them within 29 years.

How do you think that will work out?  Is it possible that the BLM and/or Antifa will create a ‘better’ America?  Do you think our “post turtle” president will solve all our problems?

For 2021, buckle your seat belts fellow Americans. It’s going to be a hell of a bumpy ride.

This video graphically and dramatically illustrates America’s immigration-population crisis as well as the world’s. I wrote it and narrated it. Tim Walters of Cleveland, Ohio directed and produced. Please forward it to all your friends, networks and beyond. Place it on FB, Twitter, Linkedin, Parler and more.  Just click the link below to see the video.