President Donald Trump’s top border official sternly reported to those Democrats in Congress that the only ‘fake news’ being spouted by the leftist water carriers in the media is calling what’s going on at the southwest  border anything less than a crisis. Carla Provost testified before the House Judiciary Committee and said, “There is an ongoing debate whether this constitutes a border security crisis or a humanitarian crisis.” Trump’s border chief claims that the U.S. Congress and the American people must understand that both are true: It is at once a national security crisis and a humanitarian crisis.

Chief Provost told the committee members that they must “look at what’s happening on the ground” rather than playing with the numbers and statistics which many believe is the M.O. (Modus Operandi) of the  Democratic Party and their media cohorts.

An example of this is how the number of border apprehensions is used to prove there is no crisis. It’s true that last year’s numbers are less than half of the 1 million people who were caught illegally crossing into the U.S. in the 1990s and 2000s. However, Provost pointed out, “today has different needs and is taking up more agency resources than a person they used to arrest.”

In the past, most of those apprehended were adult Mexican citizens. Most of these were documented by Border Patrol, turned over to Immigration and Customs Enforcement’s Enforcement (ICE) and immediately deported.”

What makes the current situation a crisis rests in the demographics of those apprehended. Over the last few years, the Central American children or families represent half of those apprehended at the border. Provost said, “Up until this decade, most of those crossing the border illegally were single adult males. Today, family units and unaccompanied alien children (UAC) make up 60 percent of illegal border crossings along the southwest border.”

Because these children are from countries other than Canada and Mexico, they are protected by a 2008 trafficking law that forbids them being removed immediately. This and other factors have pushed Border Patrol past its limits with 2,000 people being arrested every 24 hours. Most of those cannot be deported immediately because the majority are families for Central America claiming asylum after illegally entering.

“In the El Paso Sector alone,” said Provost, “we have seen a 434 percent increase in apprehensions this fiscal year. Many of these are family units and UAC arriving in large groups, exacerbating capacity constraints in our facilities.” 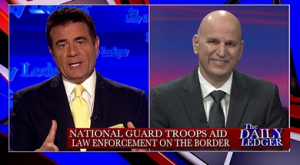 Because so many of those apprehended require medical attention, the border chief said that about 5,000 of her 20,000 agents are unable to man the U.S.-Mexico border. They instead are needed to transport and care for illegal immigrants requiring medical care.

Each day, nearly 25 percent of my agents are diverted away from our border security mission to care for, transport, and process family members and unaccompanied children.

55 illegal immigrants a day are taken to medical appointments at outside facilities. Despite the media’s mischaracterization of border agents, Provost said those agents “do not leave their humanity at home” but care for those in distress.

Danielle Campoamor of NBC News illustrates perfectly what our top Border official is trying to tell us. Either Campoamor is ignorant of what is really happening on the ground or bashing President Trump is more important than the lives of real people on both sides of the border.

Campoamor quotes the prevailing mainstream media narrative that “illegal border crossings and apprehensions have been declining for nearly two decades” and “undocumented immigrants commit less crime than native-born citizens.” NBC’s conclusion: what President Trump says is fake news, what they say is not.

But President Trump is not listening to the media to get his news about what is happening at the border. Contrary to what NBC suggests, Trump has not “manufactured an immigration crisis for his own political gain, hoping that a fear of “the other” will help him win reelection in 2020”, he has been listening to the person who knows better than anyone else what is really happening at out our border.

Trump has already promised to veto any legislation that attempts to block his declaration of a national emergency. While Washington continues to act like Washington, Donald Trump is doing something many have grown so unaccustomed to it seems revolutionary – he’s keeping a promise.

Donald Trump said elect me and I’ll build the wall. We voted, and he’s keeping his promise.

Top 5 border falsehoods pushed by Congressional Democrats and the media

On Thursday, the Department of Homeland Security’s “Top Cop” endured the unpleasant task of appearing before a congressional committee and she was subjected to adolescent badgering by what some observers called a declining Democratic Party’s socialists.

“Rather than asking questions designed to elicit important information for the American people, the Democrats efforts are decidedly formulated to chastise, ridicule, and denigrate their target and to show how they are opposed to President Donald Trump and his policies,” said former police detective and security director Iris Aquino.

“It’s refreshing to watch law enforcement people getting the Democrats to expose themselves as political pawns of the Deep State,” she added.

According to a White House spokesman, Homeland Security Secretary Kirstjen Nielsen’s testimony before Congress yesterday was mostly about National Emergency on our southern border. In reporting the latest statistics from U.S. border officials, she confronted the Democrats’ no. 1 immigration myth head-on. “We face a crisis—a real, serious, and sustained crisis at our borders,” she said.

The reason Democrats defend the status quo is not because they or anyone else believe that America’s broken immigration system is working. Indeed, the problem has only gotten worse since former President Obama himself called it a “humanitarian crisis” nearly five years ago, the Trump spokesman said.

But acknowledging such a crisis exists today would make Democrats accountable for working with President Trump to help solve it. Their leaders have already gone on the record to say they will not. Instead, they hope to keep a lid on the ugly, painful truths behind the emergency unfolding along our southern border, said the Trump White House communications department writers.

In a statement to correct myths created by the Democratic Party and their water-carrying news media, It was time to clearly set the record straight:

MYTH: There is no crisis at the border.

FACT: We continue to face a surge in illegal immigration that has brought the border crisis to a breaking point.

There has been a massive surge in illegal migrants arriving at our border, with more than 76,000 apprehended or deemed inadmissible at a port of entry last month—the most of any February during the past 12 years.

Even before this recent surge, former President Obama called the situation at our southern border “a humanitarian crisis” as early as 2014.

MYTH: The problem at the border used to be much worse.

FACT: Today, we face an unprecedented number of illegal immigrants that loopholes prevent from being returned quickly to their home countries.

The makeup of illegal immigration has completely changed from previous years. Now, record numbers of family units and minors are arriving at our border, and legal loopholes force them to be released into the interior of the country. Human smugglers know this, and these criminal enterprises routinely exploit these loopholes to smuggle children across the border as leverage.

By contrast, in FY 2000, Customs and Border Patrol (CBP) apprehensions were primarily single adults and, as such, 95 percent of those apprehended were repatriated within hours.

Apprehensions of family unit aliens and Unaccompanied Alien Children (UAC) have surged by 338 percent and 54 percent respectively this year.

MYTH: A wall wouldn’t help because drugs are coming through ports of entry.

FACT: Not only do we not know the amount of drugs smuggled between ports of entry, but building the wall will help free up more resources to seize the drugs coming in.

Obviously, there are more drug seizures at ports of entry that are manned by security than remote areas of the border with limited law enforcement presence. That doesn’t mean drugs aren’t coming in between ports of entry.

A physical barrier allows law enforcement personnel on the ground to carry out their missions more safely and effectively, preventing more deadly drugs and criminals from crossing our border in undermanned areas.

MYTH: Law enforcement such as ICE and U.S. Border Patrol are the villains in this story.

FACT: The real villains are the vile cartels and smugglers who exploit loopholes in our immigration laws for their own horrific gain. Law enforcement is the front line against them.

The brave men and women who enforce our immigration laws and secure our border are working tirelessly to keep our communities safe.

The cartels have devastated American communities with deadly drug supplies.

The smugglers who profit from our weak borders and immigration laws have subjected migrants to horrific violence and abuse. Our border officers are the ones fighting to stop them.

Secretary Nielsen testified on March 6 that law enforcement must give pregnancy tests to all migrant girls 10 years or older as a result of regular sexual assault from smugglers and others on their journey.

One-third of the women making the trek to our border become victims of rape or other forms of sexual abuse.

MYTH: President Trump’s executive action on the border is overreaching, similar or worse to President Obama’s.

President Trump acted under the clear authority provided under the National Emergencies Act to address the crisis at the border.

This is the literal and exact opposite of President’s Obama’s orders invalidating Congressional statute. President Obama violated Congressionally enacted law by effectively awarding lawful presence to those living in the country illegally and granting them affirmative immigration benefits—contravening a variety of clear-cut provisions in the Immigration and Nationality Act (such as 8 U.S.C. §1101, 1158, 1226, 1229b, 1231, 1325, and 1326).

By contrast, President Trump is fulfilling his core Article II duties to enforce our duly passed immigration laws and prevent foreign nationals from violating those laws en masse. Whereas President Obama could not find a single statute authorizing his Administration to issue DACA/DAPA (because none existed), President Trump’s emergency declaration is an explicit and straightforward invocation of authority delegated to the President by Congress.

Far from unprecedented, 60 national emergencies have been declared since Congress passed the National Emergencies Act in 1976, and 32 are still in effect today. The President’s Emergency declaration enforces existing law and carries out his sworn duty to uphold U.S. sovereignty and national security.