Last week a British court threw a man into prison for 13 months for trying to provide news coverage of the trial of a pedophile ring in Leeds—in which all 29 of the defendants are Muslims. [Link] .

Tommy Robinson, leader of the English Defense League, was standing on the sidewalk outside the courthouse when seven police officers surrounded him and carted him off in a van. Six hours later, the judge sentenced him to 13 months in jail. Given Robinson’s bold opposition to Britain’s pro-Muslim government, and the disproportionately high number of Muslim prison inmates—many of them in there for flagrantly violent offenses—some critics view Robinson’s imprisonment as tantamount to a death sentence. We wonder if that’s precisely what the judge intended. 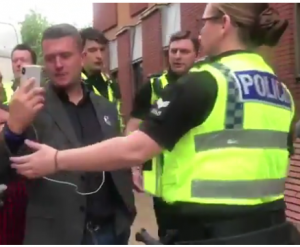 Robinson was under a gag order, forbidden to report on the pedophile trial. But that’s nothing: the court has since forbidden all British news media—all!—to report on any aspect of the case, including Robinson’s arrest. Such a sweeping gag order would be both impossible and unconstitutional in our country. There are Brits who thought it would’ve been impossible in theirs.

Nevertheless, the news is out; and there have been loud protests all over the world, including rather large demonstrations in front of the Prime Minister’s residence at 10 Downing Street. The British nooze media, always eager to oblige the government, describe these crowds as “hundreds” rather than thousands and write off all the protesters as “far right.” We cannot recall ever having heard noozies describe anyone as “far left.” They probably can’t conceive of anyone being too far to the left.

The government doesn’t think the public has a right to know about the pedophile trial. It might make them question the UK’s immigration policy. What policy is that? The one that says let’s throw the doors wide open to people who say “We hate you, we hate your way of life, we despise your laws, and we demand our own laws—or else!” Yeah, let’s have more of this.

The British government, led by the Conservative Party, spent most of the 1930s appeasing Adolf Hitler and Nazi Germany, refusing to re-arm, whistling Dixie while Hitler grabbed one piece of Europe after another, and finally, because in the long run Hitler refused to be appeased, being dragged into a catastrophic war that Britain almost lost. It was a betrayal of the British people and the people understood it as such. Their ruling class, concerned only with preserving its own privileges, had utterly failed to protect the nation.

Who can understand their policy? It looks for all the world like the government has turned against the governed. Now they have a bona fide political prisoner, in Tommy Robinson. It used to be that you had to go behind the Iron Curtain to find political prisoners—and a press so tame and servile as to be a laughing stock among the civilized countries of the world. Hey, this is England, we don’t have that here!

Well, now they do.

God ordained the civil government to keep order, restrain evildoers, and punish those who would not be restrained, so that the rest of the population can go about its peaceful daily business without fearing for their lives or property (Romans Chapter 13). A civil government that is unable, or even unwilling, to protect its own citizens has no reason for existing. Such a government is not only illegitimate, but ungodly.

It’s reached the point where one has to wonder whether Britain can survive the follies of its government. Is this their way of making nation-states fail, so they can throw up their hands and demand a global government? Run by themselves, of course. I do hate to resort to any kind of conspiracy theory: but if there’s a genuine rationale behind what they’re doing, the world would like to know what it could be.

It begins to look more and more like the Brexit vote wasn’t enough to solve the problem.

Meanwhile, you can be sure the present actions of the British government inspire and encourage the Far Left in America.