Can The Islamization of America Be Stopped?

The credit for the phrase “Islamization” should go to my friend, Pamela Gellar. Pamela has not only been active, but for the first time she came up with this word which correctly defines our state of affairs in America and elsewhere.

While some people prefer to refer to the violent version of Islam as “political” or “militant” Islam, I refused to accept this characterization. Why? Because I believe it is not “fanatical,” “radical,” or “extreme” Islam that we are fighting, but normal, orthodox, canonical, typical, accepted, traditional Islam, straight from the mouth of Muhammad. Islam is violent in direct proportion to its mission and scripture. The so-called fanatics and terrorists are only upholding the truth of their scripture. 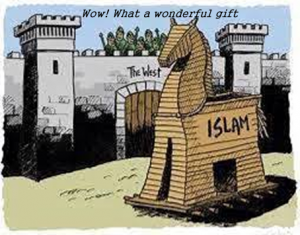 Today, our country is faced with a strong opponent in the Trojan Horse called Islam. This clear and present danger makes it imperative to revisit the U.S. Constitution and see if freedom of religion gives Muslims a license to break other American laws.

I have also observed that more Americans have come to understand that Islam has established itself as a formidable enemy and recruits disenchanted and delusional liberals with its promises.  Islam promises to bestow its beneficence on the faithful, conditional on the person’s total and unquestioned surrender to it in all matters. Some of the rewards offered by Islam to the truly obedient believers, particularly privileged males, are of this world, as well as a great deal more promised to them in the next.

The recent migration and redistribution of Muslims to non-Islamic lands and rising numbers by their high birth rate has worried some Americans. In addition, Muslims revert to their intolerance, for instance and demand legal status for Sharia (Islamic laws), the type of draconian laws that for the most part resemble those of man’s barbaric past. And this concerns many citizens.

Undoubtedly, there is no place on the planet where Muslims live that is at peace from the religion of peace. America, Spain, France, the Netherlands, England, Thailand, France, India and Indonesia have already been attacked, while others will lose their independence.

Americans are forced to learn about these new Muslim migrants who have managed to infiltrate into many of our institutions so quickly. Sharia law which is Islamic law, disenfranchises women from their legitimate equal rights with men, prescribes vicious punishments such as stoning, amputation of limbs and death.

Sharia law, contrary to what its advocates claim, does not limit application of its draconian provisions to Muslims only: it considers any and all disputes involving Muslims with non-Muslims also in its purview to adjudicate. Wherever Sharia law rules, injustice prevails. Non-Muslims, women, and even children are victimized by its biased and cruel provisions.

Because it is obligatory for a Muslim to follow Islamic laws and not man-made laws like the US Constitution, a Muslim can never be both a Muslim and an American at the same time. Hence, a Muslim is, first and foremost, an Ummaist– a citizen of international Islam.

People in the West are accustomed to relativistic rather than absolutistic thinking. To Westerners, just about all matters range from black to white with an array of gray shades in between the two poles. To Muslims, by contrast, nearly everything is either black and white with virtually no shades of gray. The former type of thinking is typical of more mature minds, while the latter is that of young children and the less enlightened.

This absolutist thinking is enshrined in the Quran itself. When the starting point for a Muslim is the explicit fanatical words of Allah in the Quran, then the faithful are left with no choice other than to literally obey its dictates or even take it to the next level of fanaticism. Good Muslims, for instance, do not shake hands with women, even though the Quran does not explicitly forbid it. Although the Quran stipulates that men rule over women, good Muslim men take it upon themselves to rule women not much better than they treat their domesticated animals.

All extreme systems operate outside of the constraints of checks-and-balances and according to the principle of the negative feedback loop. That is, once it starts, the extreme becomes more and more extreme until it self-destructs and takes the larger system down with it. Cancer is a case in point. It begins with only a few cells. Left unchecked, the few cells continue expanding and stop only with the death of the host. 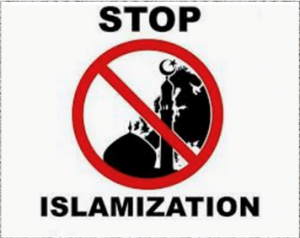 Fanatical Islam may indeed be a minority. Yet it is a deadly cancer that has metastasized throughout the body of the world. Urgent confrontation of this advancing disease is imperative to stave it off.

Europe is on its way and will ultimately lose its independence while it is forced to fully embrace Islam. That’s a no brainer. Everyone can see it. America will be next; ironically, no one is doing anything about it!

Humanity has experienced horrific wars in the past. Yet, the present multi-form and multi-front war waged by Islamists has the potential to inflict more sorrow and destroy more lives than ever before. Ruthless Islamic forces advance rapidly in their conquests while those of freedom acquiesce and retreat. This is exactly what happened to Persia.  Before long, Islam is poised to succeed in its Allah-mandated goal and cleanse the earth of all non-Muslims through ‘grand Jihad’ and establish the Islamic Ummah.

America must wake up and wake up fast to defend the land before she becomes another vulnerable Islamic victim.