By Rees Lloyd
“I am convinced that the truest act of courage, the strongest act of manliness, is to sacrifice for others in a totally nonviolent struggle for justice. To be a man is to suffer for others. God help us to be men!” — Cesar Chavez

Cesar Chavez did not merely say:  “I am convinced that the truest act of courage, the strongest act of manliness, is to sacrifice for others in a totally nonviolent struggle for justice. To be a man is to suffer for others. God help us to be men!”
He lived it.  By doing so, he succeeded where so many others failed. He achieved what was thought impossible. He inspired and taught by his example, humbly serving and sacrificing for others, and thereby has enriched the lives not only of farmworkers, but the lives of millions of Americans, of all races, all colors, all creeds, including my own life. 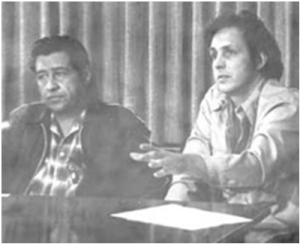 It was Jesus Christ whom Cesar Chavez worshipped, followed, and humbly attempted to emulate by service to others through living his Catholic Christian faith. I have little doubt that in the fullness of time, Cesar Chavez will one day become one of the Blessed of his Catholic faith, if not canonized.
I am greatly indebted to Cesar Chavez, especially for the example of his humble, selfless life in service for others. I will always walk in his shadow. May the God he so faithfully served bless and keep him. May the country he so faithfully served, always remember and honor him.
CESAR CHAVEZ AND REES LLOYD
At Press Conference during truckers strike in Tucson, AZ, in 1973, announcing alliance of Truckers For Justice and United Farm Workers of America (UFWA)