Change Is Coming To Iran

On a regular basis, longtime friends routinely questioned me how and when the Iranian people would rise up and topple the Mullahs. I replied, when the international community stops doing business and working with the conniving mullahs and invest their future with the Iranian people who have been deprived of basic human rights. Once Iranians realized that help was not coming, they soon adopted a way to live under this brutal regime. Some refer to it as “Stockholm Syndrome.” Meanwhile, the world remained silent. Tens of thousands of innocent Iranians have been executed in the past forty years under the watchful eye of the United Nations.

Also, for the past forty years, the Iranian people have felt hopeless and helpless. Even the UN did not come to their rescue.  From its past performance, rather its absence of performance, we know that the UN watchdog is a true disgrace to dogs, since all it does is eat, sleep and look the other way. Furthermore, it has no teeth.

So, neither the UN nor the cradle of freedom, America, made any attempt to support the Iranian people to free themselves from the yoke of the Islamic butchers. They were the forgotten people.

Iran, under the stranglehold and machinations of the Mullahs, was transformed, in less than three decades, to be the lead perpetrator of all that is abhorrent to humanity.

But, something sparked on June 20, 2009. After the fraudulent Presidential elections in Iran, 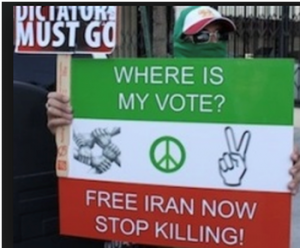 Iranians poured into the streets by the millions, chanting “Where is my vote?” This protest was the birth pangs of the Green Movement. The start of future protests. This movement rapidly evolved into a massive force aiming to sweep aside the current regime. Street slogans have changed from “where is my vote?” to “death to the dictator, in direct reference to Ahmadinejad and the supreme leader, Ali Khamenei.

Longstanding slogans, vilifying the U.S. and Israel, have been drowned out by slogans against the supporters of the Islamic regime, such as Russia and China. It appeared that the end of the regime was within reach. The Islamic Republic’s response to the legitimate peaceful demands of the people was an iron fist and bullets. Tens of thousands of Iranians again died during the protests including Neda Agha Sultan.

During their brutally suppressed protests in 2009, Iranian freedom fighters sent the White House an urgent memo calling for help. Under Obama, America completely ignored it and in fact, gave the Mullahs a green light to crush the protesters. Tens of thousands more were massacred.

After the 2009 Green Revolution, the Iranian people realized the previously solid oppressive rule of the Mullahs, no longer holds. Many deep cracks were popping up in the system and among the contending factions that has led to current protests, except, this time around it is widespread across Iran and the mainstream population.

This new social upheaval has frightened the Islamic Regime who believed they were a solid and impenetrable force. But now they feel they have been cornered by the people, especially, after President Donald Trump pulled out of the Iran Nuclear deal. The Islamic Republic is entering a period of prolonged transition where it will no longer be able to proffer a theocracy with a human face.

The current situation in Iran is indeed dire. Iranians are swarming for U.S. dollars as Iran’s currency, 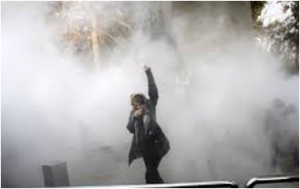 the rial, has plunged to historic lows amid economic and political uncertainty. The Iranian currency, rial has lost one-third of its value this year alone and is now 60,000 to the dollar. That number is a lot higher at black market prices.

Resentment of the Islamic regime aside, political, economic and social grievances have driven Iranians into the streets. The protests are the largest in the country since 2009. Protesters’ chants and attacks on government buildings upended a system that had little tolerance for dissent, with some demonstrators even shouting “Death to the Khamenei!” — referring to Supreme Leader Ayatollah Ali Khamenei — and asking security forces to join them.

The protesters have been chanting for the return of Prince Reza Pahlavi, the eldest son of the former Shah of Iran, Muhamad Reza Pahlavi. This is particularly significant.  For now, there is no unifying force among the anti-government protesters. While people are demanding the return of  Reza Pahlavi, at the same time, they reject the former Saddam Hussein loyalists the Mujahedin e-Khalq  (MEK)  who are greatly despised, by  almost all Iranians.

The time for a change has arrived.  The majority of the Iranian people refuse to be fooled and intimidated any longer. They refuse to obey orders from the beasts of Allah currently ruling Iran. Iranians have recognized the fundamental weaknesses of their oppressors. With a little help, here and little help there, they can be transformed overnight from seemingly subdued and helpless sheep into mighty lions.

It is time for the Iranians to strike, gather forces, organize, and especially demonstrate in the streets in increasing numbers, even in the face of massive, gruesome, bloody repression by the Islamic rulers who still have a powerful armed apparatus at their disposal. It is time to unleash the wrath of the Iranian people on the Islamic zealots. It is time to become even more defiant and end the barbaric theocratic regime by massive participation in a freedom revolution to end this primitive Islamic nightmare.