In several recent articles I shared the story about a Republican friend and Christian here in Salem, Oregon, a Judge appointed by a Democrat governor to the Marion County bench but when the U.S. Supreme Court gave the approval of same-sex marriages, Judge Vance Day decided not to do any marriages at all and his problems began. Following is the testimony by his wife Elizabeth:

First, on behalf of my family, who are all forever thankful for your generous sacrifice and your constant prayer, Merry Christmas. God sure does answer prayer! In my last letter, I explained how we were totally committed on winning Vance’s criminal trial that began October 22 and was scheduled to last three weeks.

Our legal team, empowered by your prayers and your generosity, worked around the clock doing everything they could to get ready. They built an extremely strong case and we were incredibly confident in our approach.

CHRISTIANS SHOULD NOT BE ALLOWED IN GOVERNMENT 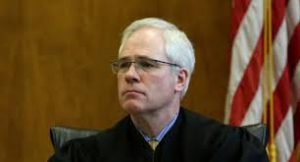 Before I share with you the outcome, I want to explain what we were up against. From the very beginning, this was a political hit job with one goal, destroy Vance Day. In front of the entire country, the hateful message was clear – if you’re a Christian, you will not serve in public office. The State of Oregon did everything in its power to do just that.  They ignored my husband’s Constitutional rights, they ignored the facts of the case, they ruined his credibility before the trial, and they even tried to stack the jury against us. They were aggressive in their tactics and even failed to cover it up so we were able to convince the judge to move our trial.

And the county to which they moved the trial (Multnomah County/Portland) was even worse than Marion County.  I told you that I believed there was no place in this state that my husband could get a fair trial – that’s how dedicated they were to their smear campaign.

Out of more than 100 potential jurors interviewed for the case, only a hand full were determined to be impartial enough to participate. The rest were already leaning toward the conclusion that my husband was guilty before the trial! One even said, “I can’t be unbiased because he is a white privileged male.”   This proves how the liberal media portrayed and destroyed the reputation of my husband, nearly guaranteeing he would be found guilty. In their eyes, the truth doesn’t matter, trial or not he is guilty, and a suspended, guilty judge sure sells a lot better than an innocent one.

But to make a long story short, Vance has been doing this a long time. He has witnessed this game played out before. He knows the game and how to play. The state’s case against my husband revolved completely around their key witness who told the prosecutor from the very beginning that he was uncomfortable testifying against my husband. That should have been enough. If your only witness says he really doesn’t want to testify, it would be clear to any rational human being that no matter how hard you try to force a crime upon someone they didn’t commit, you have no case. But instead of dismissing the case, as they should have, they continued to drag my husband’s name through the mud, embarrass our family in the media and discredit all of his good works.

As I see it, the state did this because my husband is a faithful, God fearing Christian. In the end, the Lord won – as He always does. Right before the unfit jury was about to be sworn in, the prosecutor turned to the judge and said SHE was going to dismiss all charges. I couldn’t believe it.  I fought back tears when the presiding judge dismissed the case.

Not only that but the judge declared that the Statute of Limitations had expired and the State of Oregon could never refile these charges against my husband. Hallelujah  It was nothing short of a miracle and you helped create it. Thank you so very, very much. Your dedication to supporting our family and your continuous prayers are what made the difference.

I wish I could tell you this is over, but it isn’t. My husband is now facing opposition from the Oregon State Bar association. They intend to punish my husband further to prevent him from potentially ever practicing law or becoming a judge again.  Then she refers us to a letter from her husband for more details.  I just wanted to be done with this, and I asked Vance if he was ready to let this go and he said, “NO.” He said Christians have the opportunity to fight back for what is right and that’s exactly what he is doing to do.

We have come this far and we are not going to stop now. What they have done to my family and what they have done to Christians is not acceptable.  I hope you will continue to stand with us as we have the opportunity to go on the offensive and force the Oregon Supreme court to re-evaluate the facts of the case instead of dismissing my husband’s rights. I know that you are as ready for this to be over as much as we are, but for the first time, the odds are starting to swing in our favor and we must take this opportunity to do right. This case is no longer about the radical left’s treatment of innocent, Godly men. This case is now about American citizens and their freedom of religion and due process.

The decisions made in the future will reverberate for years to come and the ruling will be used to either take our Constitutionally guaranteed rights from us, or be used to protect them. So I ask if you will continue to stand in solidarity with my husband, the Honorable Judge Vance Day as he fights for what is right?

Thank you for everything you have sacrificed for us, thank you for never forsaking us, and most of all, for all your prayers.

The Judge’s letter repeated much of what his wife has written above but also said he’d be on the Huckabee show on TBN either December 1st at 8 PM or on December 2nd at 5 PM. I hope News With Views will post this in time.