“Accuse others of what you do.” — Karl Marx

“John Brennan’s resume includes voting for Communist Party of America’s presidential candidate Gus Hall; converting to Saudi Arabian-style Islam (Wahabbism) while serving as CIA bureau chief in Saudi Arabia; and helping to turn the intelligence community and counter-terrorism police units into tools of President Barack Obama and the Democratic Party. In short, it is he who has exhibited treasonous behavior, not President Donald Trump who is the recipient of enormous hate from Brennan.” — Chief Perry Townsend, Morrisville Police Department

In response, Brennan practically ran to his co-conspirators at the former cable news network turned infomercial haven for the Democratic Party’s Deep State, MSNBC, and went on-the-air and called Trump treasonous and other derogatory terms.

James Clapper should be next as both he and Brennan work for CNN. That will cut off CNN from classified material, they can’t be trusted with. In fact, no one on that list can be trusted and by time Congress or Sessions acts, Trump’s second term will be over. There is no justifiable reason to allow them to keep access to this material or anything new that pops up.

The administration has threatened the action before. Sarah Sanders said yesterday in a statement from the President:

“I have decided to revoke the security clearance of John Brennan, former director of the Central Intelligence Agency. Historically, former heads of intelligence and law enforcement agencies have been allowed to retain access to classified information after their government service so that they can consult with their successors regarding matters about which they may have special insight and as a professional courtesy. Neither of these justifications supports Mr. Brennan’s continued access to classified information.”

“As the head of the executive branch and commander-in-chief, I have a unique constitutional responsibility to protect the nation’s classified information, including by controlling access to it,” Trump’s statement read. 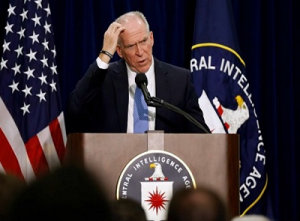 Giuliani says Mueller is just a puppet. Stating someone else started this mess and is actually pulling the strings. He says that person is John Brennan. Many Americans will find this very easy to believe.

If you look up ethics, there won’t be a picture of Brennan anywhere to be seen. We already know how he weaponized the CIA against President Trump. Also, we know he was involved in Spygate and the other aspects of the Russian collusion probe. So Giuliani’s accusation does not have much in the way of shock value.

Some of the U.S. intelligence community’s top analysts reportedly informed the Pentagon watchdog that their reports had been systematically edited to backup President Barack Obama‘s and his national security team’ assertions that the war on the Islamic State of Iraq and Syria (ISIS) was more successful than it actually was, according to news reports from outlets such as The Hill. 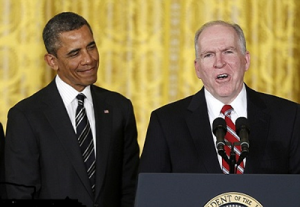 complained to the Pentagon’s “top cop,” Inspector General Jon Rymer, about the politicizing of the intelligence gathering and analysis function. In July, a couple of analysts filed a complaint with Rymer’s office, after months of internal complaints were allegedly ignored.

It got so bad, according to Examiner source Pete Vanderhill, a former police intelligence division operative, that some of those career intelligence operatives who complained were bullied and forced to take early retirement, or the younger analysts just quit. After the mini-purge of intelligence officers, other analysts said they supported their colleagues’ formal report and can back up their claims of political shenanigans to make Obama, Kerry and others look good.

The most important — perhaps most damaging — complaint is that “senior [administration] officials are editing the intelligence analysts’ reports to bring them into line with the Obama administration’s claims” such as the Obama-led war on ISIS is successful. Also, the analysts were pressured, they say, to make Iran look less involved in terrorist support and that the Iranians have less interaction with terrorist groups such as Hezbollah and Palestinian terrorist groups. The suspected goal was to make Iran appear less dangerous to Americans while Obama and Kerry pursue a nuclear deal with the radical Islamist government.

Besides the internal investigation by Rymer’s office, Rep. Mac Thornberry (R., Texas), the chairman of the House Armed Services Committee, said his committee is investigating. “No doubt that these allegations are troubling and the committee is looking into them,” Thornberry said. “Accurate intelligence and unbiased analysis can often be a life or death matter and must remain free from political pressure.” 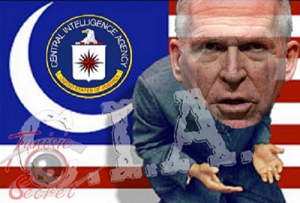 “There is an abundance of proof that America’s national security and counter-terrorism decisions were being made by Obama’s White House minions Susan ‘Benghazi’ Rice, Valerie Jarrett, Ben Rhodes, and the man serving as Obama’s homeland security adviser, John Brennan who was then elevated to the position of Director of the CIA. They ran the operations while riding roughshod over the real intelligence and law enforcement officials,” said Sid Franes, a former military intelligence operative and New York police detective.

“More than four dozen U.S. intelligence analysts formally filed complaints that their honest intelligence evaluations regarding the Islamic State of Iraq and Syria (ISIS) and al-Qaida’s branch Al Nusra Front in Syria were altered by superiors to prop up President Barack Obama’s false proclamations that he and his ‘national security team’ were winning the war,” said political strategist Kiernan Cummings.