A number of watchdog-group reports and news stories have revealed the serious deficiencies that exist within the Central Intelligence Agency especially during former-President Barack Obama’s two-terms in the White House. Some blame Obama’s CIA director John Brennan for allowing what was supposed to be a non-political bureaucracy into a politically-motivated subsidiary of the Democratic National Committee. 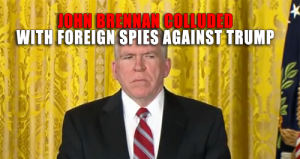 While the investigation of alleged collusion between the Trump for President campaign and operatives working for Russia’s President Vladimir Putin does not appear to be bearing fruit, it does prove how easily computer hackers have exposed classified intelligence from the once-considered premiere spy agency, the CIA.

In fact, according to a number of reports coming from watchdogs such as Judicial Watch, the Clarion Project, Larry Klayman’s Freedom Watch, and others, the CIA and FBI have conceded that it must have been an insider and that the CIA is currently searching for the traitorous leaker.

In addition, the former Director of Central Intelligence, John Brennan, allegedly worked feverishly to undermine Donald Trump’s presidential campaign by leaking intelligence obtained from Great Britain and European Union countries. It’s already been revealed that a British top-secret signal-intelligence agency sent reports to Obama or his minions who then leaked them to the world’s news media.

According to Trump insider, Roger Stone, “[T]he standard operating procedure for the intelligence agencies. They go to a third-party nation and they ask them to conduct the survelliance so that the CIA can play dumb. So they have not violated the law, technically. Judge Napolitano turns out to be absolutely right and I think folks at FOX, management, owe him an apology. I want to learn more about this because I still think we are going to learn that the deep state, the 17 intelligence agencies, have promulgated this myth of Russian collusion because it is the rationale they used to surveil Donald Trump and his aides. And that would mean that there is no Russian collusion proven, Steve, and their motive was solely political. That’s Watergate times 10.”  http://www.dailymail.co.uk/wires/pa/article-4409846/GCHQ-principal-whistleblower-Trump-team-s-Russia-links.html

“While opponents of President Trump have become emboldened in the wake of General Flynn’s resignation as the National Security Adviser, and while the media has reveled in a frenzy of self-righteous outrage that conceals its glee, it is important to observe that his resignation was sparked by leaked information coming from unelected bureaucrats within our nation’s intelligence apparatus, seemingly provoked by their deep distaste for the new administration. Even more ominously, some of these bureaucrats are perhaps motivated by their loyalties to the Obama administration,” said Jay Sekulow, a public-interest attorney who often argues cases before the U.S. Supreme Court. claims that following is known:

Sekulow also said, “Someone in the Obama Administration unmasked the names of those on the Trump transition team who were caught up in that surveillance. That someone was discovered to be Susan Rice who served Obama as the national security adviser and gained a reputation as a dishonest political hack and liar.”

“Now we know this goes far beyond incidental surveillance. This was spying on political enemies,” he added.

During a press conference in September 2010 at the National Press Club in Washington, DC on Thursday, respected experts, including officials from the Florida Security Council, told reporters that because of Brennan’s adherence to the politically-correct orthodoxy that permeates the Obama administration the U.S. government is being prevented from identifying, understanding and countering radical Muslims and their threat of imposing Sharia law.

Frank Gaffney, a former Assistant Secretary of Defense during the Reagan administration, and others claim that Sharia is a supremacist, totalitarian legal doctrine that leads to terrorism, torture, abuse of women and young girls, and other horrors.

During the six-week FBI program, Mustapha – a man tied to an officially designated terrorist organization – was escorted into the top secret National Counterterrorism Center and other secure government facilities, including the FBI National Academy located on the Quantico, Virginia U.S. Marine Base.

“Mr. Brennan is, at best, willfully blind to the threat posed to the homeland and national security of the United States by those who adhere to shariah. In the wake of this recent episode at the National Counterterrorism Center, in which the FBI gave a guided tour of one of our most sensitive counter-terrorism facilities to a known Hamas operative, it is clear that the cluelessness fostered by Mr. Brennan is causing an empowering of the wrong sorts of Muslims in America – and endangering the American people,” said Gaffney to reporters.