In THE WALL STREET JOURNAL (Nov. 25, 2016), I explained how Donald Trump came to be president. I wrote that “a WASHINGTON POST report in early August 2015 said that ‘Bill Clinton had a private telephone conversation in late spring with Donald Trump…encouraged Trump’s efforts to play a larger role in the Republican Party…and then analyzed Trump’s prospects and his desire to rouse the GOP base.'” The GOP base had become comprised mostly of the Tea Party and Christian Right, who were tired of promises by the Republican Establishment never being fulfilled.

Bill Clinton and the Democrats correctly believed that with Trump’s political inexperience, he could as president easily be “set- up.” For example, in one of his early press conferences, he did not realize that THE NEW YORK TIMES reporter had a physical handicap and made 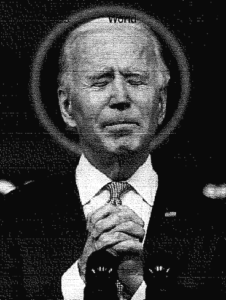 fun of him. These types of set-ups occurred again and again until the 2020 election, with a compliant press/media unwilling even to investigate how “Biden underperformed Hillary Clinton in every major metro area around the country, save for Milwaukee, Detroit, Atlanta and Philadelphia….In these big cities in swing states run by Democrats…the vote even exceeded the number of registered voters.” (Rasmussen Reports) Protests ensued, dividing the Republican Establishment and the Trumpists, culminating in the June 6, 2021 violence in Washington, DC.

The violence allowed President-Elect Biden to appear “Saintly” in his call for “simple decency,” even though “Saint Joseph” and the Democrats will soon pass legislation forcing taxpayers to pay for abortions even though polls have consistently shown the American people oppose such funding by an almost 2 to 1 margin! Lest you think the word, “Saint,” is too extreme, look at the photo accompanying a January 6 Associated Press article. It shows Biden in Wilmington, Delaware with his eyes closed and his hands folded in prayer, while his head is surrounded by what visually appears to be a halo !

When Joe Biden becomes President on January 20, the Democrats will be in control of the legislative and executive branches of our government, and they will be able to pack the Supreme Court, thus controlling all branches of the federal government. Nothing will be able to stop their agenda, and with 2 new Senators from Georgia and possibly 2 more new Senators from the District of Columbia if it is admitted to the Union as a State. the Democrats will probably retain control of the Senate in 2022 because only 1/3 of the Senate is up for re-election every 2 years. And if Puerto Rico is also admitted to the Union, with 2 more new Democratic Senators, the Democrats could even retain control of the Senate in 2024, especially if the Trumpists and the Republican Establishment are still at odds. Thus, even if the Republicans were to win the Presidency and U.S. House in that year, the Democrat-controlled Senate could block any attempt to reverse what the Democrats do between now and 2024.

This Democrat control will allow President Biden to implement his “New World Order” that he called for in the Senate on January 13, 1993. And this will help achieve a World Federal Government wished for by President Clinton in a June 22, 1993 letter signed by him and which I have! As a Rhodes scholar, Bill Clinton will have thus fulfilled the dream of Cecil Rhodes when he founded the secret Society of the Elect “to take the government of the whole world!” in Rhodes’ own words. However, what Clinton and Biden would do well to remember is Mark 8:36, which states: “For what shall it profit a man, if he shall gain the whole world, and lose his own soul?”