Russia invaded Ukraine on February 24, 2022 in what has been called the largest conventional military attack in Europe since World War II. The Russian military incursion into Ukraine has been roundly condemned by most Western politicians and mainstream media outlets. Russian President Vladimir Putin has been called a killer and has been compared to Adolph Hitler. Cold War II has begun.

Fox News host Sean Hannity recently suggested that Russian President Vladimir Putin should be assassinated and called for NATO to bomb the Russians and their convoys in Ukraine. Hannity stated, “You cut the head of the snake off and you kill the snake. And right now the snake is Vladimir Putin. Anyone who invades a sovereign country (even one with a history of corruption like Ukraine), and kills innocent men, women, and children like Putin has, they forfeit their right to lead a country, and they deserve to be taken out by any means necessary.”

To believe that Putin is acting unilaterally, without the support of other Russian leaders in the Kremlin and the support of most Russians, is beyond ignorance and naivety. The latest Russian polling shows that 70 percent of the Russian population is firmly behind Vladamir Putin. 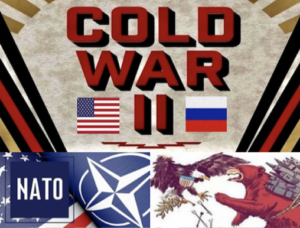 Before we remove Putin from power, we should first remove our unelected usurper president, Joe Biden from power. Before we commit to helping Ukraine protect its border, we should first protect our Mexican border from illegal immigrants flooding into America. Before we lecture Russia on how wrong they are for invading a sovereign nation, America needs to stop invading sovereign nations (Vietnam, Beirut, Grenada, Panama, Iraq, Somalia, Bosnia, Kosovo, Afghanistan, Iraq, Libya, Syria) and establishing military bases all over the world. Before we state that Russia cannot reacquire its former Soviet Bloc nations, the united States should first recognize the Confederate States of America.

Are we awakened Americans suddenly supposed to forget this post-republic country we find ourselves living in, wave Ukrainian flags, and patriotically support Joe Biden and oppose Russia? Are we supposed to forget how often and frequent our politicians and media continually lie to us about things such as Covid, the need for lockdowns, Covid hospital death camp protocols via ventilators, “safe and effective” vaccines, and the world being on the brink of catastrophe due to global warming? Joseph Goebbels would be in awe of America’s propaganda machine. 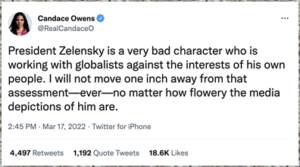 This may sound un-American and controversial, but Ukraine is the second most corrupt nation in the world, behind only the United States, which is the most corrupt. Which is more corrupt, the strong nation (America), who bribes the weaker nation with a billion dollars of grant money or the weaker nation who accepts the grant money with strings attached? Strings such as firing a prosecutor investigating Joe Biden’s son Hunter, who received an $83,000-per-month salary in kickbacks, ahem I mean “worked” on behalf of Ukrainian energy company Burisma, as part of the deal for the billion dollars being granted.

Ukrainian President Volodymyr Zelenskyy is the poster boy of a propped up Western puppet leader, as far as Russia is concerned. Due to Western aid, primarily American, Ukraine has become a base for further NATO encroachment upon Russia’s borders. To believe that Russia invaded Ukraine solely as an act of Russian aggression for global conquest on the whim of a dictator is ignoring history. As Putin has stated, “The U.S. is parking missiles on the porch of our house [in Ukraine, aimed at Russian cities].”

“Do not judge a man [nation] until you have walked a mile in his shoes.” -American Proverb

Nazi Germany invaded the Soviet Union on June 22, 1941 with 3.8 million troops, the largest invasion force in the history of warfare at the time. Nazi German forces seized Ukraine, which was part of the Soviet Union, and were eventually driven out of Ukraine by Russian forces. WWII is referred to by Russia as the Great Patriotic War. Thus, when Vladimir Putin proclaims that Russia and Ukraine share a history together, he is not lying. When Putin explains that the West is using its historical ally, Ukraine, as a launching pad for NATO missiles aimed at Russian cities, he is not lying. Russia, having been attacked by Nazi German Europe in its past, has every reason to be concerned about NATO aggression at its border.

A large segment of Ukraine is Russian, the Russian and Ukrainian languages are similar Slavic languages and use slightly different versions of the Cyrillic alphabet.

Build Back Better was a United Nations concept program introduced in 2015. The slogan was afterward adopted by the Biden administration as a talking point for the rebuilding of America after the widespread property destruction, encouraged by the Democrat Party, in the wake of racial unrest of 2020. American-led NATO follows a similar pattern of Build Back Better. NATO’s methodology is to topple regimes and nation build.

Russia views NATO as liars, who perpetually promise security, then continue to approach the border of Russia. Russia’s invasion of Ukraine was more of a defensive act to use Ukraine as a buffer zone against NATO encroachment than it was an act of a nation aggressively seeking to overtake and conquer another nation. Russia will never accept Ukraine joining NATO.

Is the Russian Federation supposed to sit idly by as the U.S. funds 25-30 biolabs in Ukraine? Is Russia expected to trust the same American government who has funded the Wuhan lab in China and all but certainly took part in the greatest unleashing of a virus upon humanity in the history of the world? Who knows what evils the Deep State have planned for Russia. While U.S. “fact” checkers are claiming that there are no U.S. bioweapons labs in Ukraine, but only biological “research” facilities, after being lied to repeatedly over Covid and a whole host of other political issues, U.S. politicians and the mainstream media have lost all credibility. As a matter of “fact,” it should now be expected that the U.S. government and mainstream media will perpetually and pathologically lie to us.

Russia’s President Putin, using sound reasoning, is making Western media reporters look like deer caught in headlights every time they interview him. Whether the topic is Ukraine, Russian aggression, homosexual rights in Russia, Donald Trump, or alleged interference in the 2016 U.S. presidential election, Putin has outwitted the Western narrative with plain, straight talk answers. Not since President Donald Trump has there been a politician as able to clearly expose the agenda, bias, corruption, dishonesty, and fakeness of Western leaders and their mainstream media lapdogs as Russian President Putin has been able to do on the world stage.

We now know that despite all 17 U.S. “intelligence” (propaganda) agencies reporting that Russia interfered with the 2016 presidential election, they didn’t. After being accused of doing so, Putin asked reporter Megan Kelly to provide some example or some actual evidence showing specifically exactly what Russia did to interfere with the 2016 U.S. presidential election. Kelly’s answer was, in sum and substance, “Well, we all know you did.” Our mainstream media and Deep State U.S. government are full of pathological liars!

Western media has tried to trap President Putin with accusations that Russia is anti-homosexual and Putin calmly explains that it is not illegal to be gay in Russia, there is no death penalty for gays in Russia, and if Elton John wants to do a concert in Russia he is welcomed. What is illegal in Russia is the promotion and propagandizing of homosexuality and child abuse (which includes pedophilia and gender mutilation surgery), practices which the Western nations have recently adopted or are in the process of adopting.

The greatest benefactor of the Russian occupation of Ukraine is none other than Hillary Clinton. The Durham report shows that Hillary Clinton spied on both candidate and President Donald Trump and attempted to manufacture fake evidence tying President Trump to Russia. The mainstream media did its best to cover for Killary and they did, with only conservative outlets Fox News, Newsmax, and One America News covering the story. After the Russian incursion into Ukraine, the news cycle shifted and Hillary Clinton got away with treason, again.

The Commander-in-Thief of the United States, Joe Biden, is either completely incompetent or is purposely implementing policies that are intended to harm the citizens of the United States and bring down the country. BIDEN DOES NOT KNOW WHAT HE IS DOING! If Biden actually does know what he is doing, it is even more ominous for Americans. In order to save the environment, which didn’t need saving,

Biden ordered a halt on the construction of the Keystone Pipeline and has now imposed sanctions on Russian oil, because of their Ukraine invasion, which has and will continue to drive up gasoline prices at the pump. Americans can now rely on our friends, the Saudis, to step up oil production to fill America’s petroleum needs. Transportation Secretary Pete Buttigieg urged Americans to just go out and purchase new electric vehicles to avoid paying high gas prices.

Poking the bear… American citizens have been programmed over the years to believe everything Russian is evil. From popular movies such as Rocky IV, Creed II, The Hunt for Red October, and Firefox, the Russians are always portrayed as evil dumb brutes who are always defeated and outwitted by the good Americans.

It is not until hundreds of years into the future, in Star Trek, is a Russian viewed in a positive light, albeit a Russian who speaks English with a heavy Russian accent.

The last State of the Union Address featured a crooked senile thief, standing in front of a dimwitted whore, and a bat-shit crazed woman. With immoral, incompetent leaders such as this, as well as the aforementioned homosexual transportation secretary and many other immoral leaders, America will not remain a blessed nation for very much longer. Which leads to the second part of the article to be released soon.

Who is pushing the narrative on Russia? The global and cultural elites that have made many Americans believe that Russia is an inherently evil nation. The very same people who have spent the last two years trying to enslave every person on the planet through their Covid pandemic narrative. Russia has finally said enough and has begun drawing their own red lines. Cold War II is upon us.