“I am concerned for the security of our great nation, not so much because of any threat from without, but because of the insidious forces working from within.” —General Douglas MacArthur

In my column April 30th, I ask: Why is James Comey still Director of the FBI? To my astonishment and delight, President Trump fired Comey ten days later on May 9th. I know a great many people wanted Comey fired so it was a good day for our country. 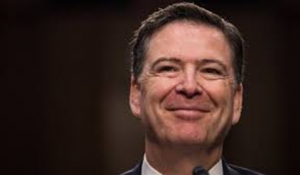 Last week the prostitute media went into hysterical overdrive as the moment of swearing in and testimony by fired FBI Director, James Comey neared. Members of the Democratic/Communist Part USA on the sick joke called the Senate ‘Intelligence’ Committee were near sexual ecstasy just waiting for Comey to drop a lethal bomb shell that would send President Donald Trump to a microphone with his pre-prepared speech telling the country he would be leaving office, blah, blah, blah.

Democrats Are Hoping This Is Watergate – But In Reality Comey’s Testimony Turned Out To Be A Huge ‘Nothing Burger’ – by Michael Snyder, attorney at law

“Dershowitz argued that Trump “could have told Comey, ‘You are commanded, directed to drop the investigation against [Gen. Michael] Flynn,’” but noted that he didn’t do so, according to Comey’s prepared testimony that was published on Wednesday.

“The famed attorney also said Trump could have pardoned Flynn as well, but also chose not to do so. In the end, he concluded that there appears to be no criminal activity on the part of the president, particularly when it comes to obstruction of justice claims.” For those who might not be familiar with Dershowitz, he is a die-hard Democrat.

The whole Russia conspiracy brouhaha was manufactured a long time ago and my bet at the track window is rogue individuals in the CIA who care nothing for the law or the truth, only what they want that will further their current agenda, played a major role. That included doing what they could to destroy Trump to usher in one of the most vile, corrupt individuals ever to serve in office, Hillary ‘the man’ Clinton.  We know they possess the means to create documents and computer footprints that can put innocent people in prison or ruin their reputation.

Of course, nothing of the sort happened. The only predictable thing was the Internet set on fire. TheTrump haters, CNN, MSNBC, NBC, CBS, ABC were all predictable. As I no longer have cable TV, I don’t watch FOX but did listen to some Limbaugh and Hannity on the air while driving around town. Much has also been written:

James Comey stars in another bad movie
Comey confirms Trump didn’t try to stop probe
Comey Describes a Frustrated President Who Wanted to Get on With the Country’s Business– (Gee, what a crime)

Comey put himself in further legal jeopardy while playing the victim and in my mind simply re-inforced he was a dirty cop in collusion to save Hildebeast Clinton from being indicted by a grand jury – and possibly the whore she’s married to, Billy Boy. For me, no doubt Comey committed blatant in-your-face obstruction of justice by not requesting a referral for Hildebeast Clinton’s email crimes to a federal grand jury. THAT is what should be investigated along with another Trump hater, former AG Loretta Lynch:

I take exception to this statement in the piece above:

“Comey also said it was Lynch’s infamous meeting with former president Bill Clinton on an airport tarmac that pushed him into going public last year about the Hillary Clinton email investigation. North Carolina Republican Sen. Richard Burr raised eyebrows with a momentary flashback to Comey’s July 5, 2016 press conference, in which he described a host of potential criminal offenses committed by Hillary Clinton.< style=”font-family: candara;”> Comey said former attorney general Lynch’s private meeting with Bill Clinton on an airport tarmac was the last straw that convinced him he had to come forward.

“The FBI ultimately did not recommend criminal charges against Mrs. Clinton, who was running for president against Donald Trump at the time.But Comey’s public statements spelled the beginning of the end for her White House ambitions. That tarmac meeting, which raised suspicions of collusion, influenced him ‘in an ultimately conclusive way,’ Comey testified. ‘That was the thing that capped it for me, that I had to do something separately to protect the credibility of the investigation,’ he said.”

Bill & Hillary Clinton’s entire adult lives have been involved in politics in some form or another. Both are two of the biggest liars and crooks ever to hold public office. Both should have gone to prison decades ago. The American people were fed up with the so-called Clinton ‘royalty’ or ‘dynasty’ BS, their globalist agenda, no jobs and what became known as ‘Clinton fatigue’. Voters had enough of the Clinton’s, thank you. Americans from all walks of life came out in record numbers to vote Trump into office and make sure Hillary was shown the back door.

I’m sure they all violated many more federal laws as has been covered hundreds of times by lawyers on FOX and talk radio shows. No one is above the law and now is the time to prove that to We the People.

Comey Thought He Knew of Obstruction Of Justice in Hillary Case, Furthered the obstruction instead of reporting it: “James Comey is truly a piece of work. This wasn’t the first time he had given a pass to the Clintons. ”
Here’s the Part of Comey’s Testimony That Could Come Back to Haunt Him
Confirmed: Comey Committed Perjury to Congress

And, let’s not forget Comey exposed himself as a leaker. Comey’s Columbia leaker pal goes into hiding after testimony
Trump’s lawyer slams Comey memo leak, suggests ‘authorities’ should investigate
Judicial Watch: Comey’s Home and Office Should Have Been Raided by US Marshals Following Leak Confession

And…if Comey thinks Trump is going to let him get away with calling him a liar in front of the whole world, Comey is a fool. Dump the special counsel political theater and let Jeff Sessions’ DOJ go after Comey, Lynch & the Clintons.

Did you make a donation to NewsWithViews.com yet? They sure do need it to keep this web site up and running. If you haven’t made a donation, please do. Not the whole farm but if everyone gives a little something those little something’s do add up. Click here.

Devvy Kidd authored the booklets, Why A Bankrupt America and Blind Loyalty; 2 million copies sold. Devvy appears on radio shows all over the country. She left the Republican Party in 1996 and has been an independent voter ever since. Devvy isn’t left, right or in the middle; she is a constitutionalist who believes in the supreme law of the land, not some political party. Devvy is a member of the Society of Professional Journalists. Devvy’s regularly posted new columns are on her site at: www.devvy.com. Email: devvyk@npn.net