Here’s the solution to the outrageous DOJ corruption that is jeopardizing the Trump agenda. Attorney General, Jeff Sessions, is clearly compromised. The Deep State power boys have something very bad that they are holding over his head that they will expose if he gets rebellious and decides to oppose the perpetuation of the Deep State. This has quieted Sessions and made him into a mouse instead of a tiger.

So Trump needs to bite the bullet and fire him while replacing him with a top legal Washington outsider who is clearly a conservative and possessed of a squeaky clean record. The new AG will then “reassign” the rodent Rosenstein and bring in someone more supportive of the Trump agenda as Deputy AG. Give Rosenstein the job of cleaning out the Justice Department restrooms.

The reason why Rosenstein (who is a George W. Bush appointee to the DOJ but asked to remain by Obama) is now in the powerful position of Deputy AG is because Trump was persuaded to appoint him by none other than the accommodative little RINO, Reince Priebus. God, what a disaster Priebus was. He has no idea what the Deep State is all about. But then how can he? His sentiments and instincts lie clearly with the Deep State, just as Paul Ryan, Mitch McConnell and all the other RINOs. Priebus was trying to make Trump into a soft revolutionary, a promoter of superficial changes to the system, but no upsetting of the system in its fundamentals. Sort of like rearranging the deck chairs on the Titanic.

The new squeaky clean AG will then pressure Mueller to close down his investigation because he has exceeded his mandate. He can hold over Mueller’s head the past skeletons in his closet, such as his involvement in the Uranium One affair. There are other skeletons that need to be used as leverage also. Mueller will see things differently as soon as his little weasel ally, Rosenstein, is gone, and there is no one in the DOJ to protect him anymore for his excesses.

Possible candidates for Sessions’ replacement are Kris Kobach, Secretary of State for Kansas, a tough conservative, and clearly a Trump supporter. Also Pam Bondi, Florida AG and a solid conservative supporter of Trump. Kobach is first choice because he will not take any push back from Mueller. He will tell Mueller to close down or else the seedy doings of his past are going to be unleashed. His place in history will be remembered as a totally amoral statist flunky who has crossed several lines of propriety and perhaps even criminality. This is what everybody is missing. Mueller is a dirty cop with a tarnished past. See Roger Stone: Robert Mueller, Dirty Cop.

Sure Sessions has friends in Congress who will be upset, but half of them are already clearly disenchanted with his timidity on running the DOJ. They will not squawk at Trump’s decision to let Sessions go. They will know it is in the best interests of the country. But Trump has to step up to the plate. If not, then Mueller will continue to investigate Trump lawyer, Michael Cohen, to unleash all the dirty laundry he can.

Mueller will try to build a case against Cohen and his past business dealings that brings a lengthy spell in prison, but will promise him “probation” if he will turn on Trump and implicate Trump in something illegal. But Cohen has to be “persuasive” in his testimony – code for “making something damaging up” that will be winked at by Mueller if there is nothing illegal in Trump’s background.

The cesspool that comprises today’s Washington is so rank and ugly it would never make it into the most sensationalist of novels. Any author who tried to write a tale with today’s partisan treacheries, sell outs and venalities would probably be accused of hyperbole by his publisher, and urged to tone down his rhetoric and characterizations. “No one will believe that our politicians and bureaucrats are this dirty, this egregiously unprincipled,” the publisher would say. Such is the real reality of human nature when it is given power to strut and push people around, while totally devoid of any moral guidance and decency.

Lord Acton warned us a century ago that, “Power corrupts, and absolute power corrupts absolutely.” The snakes, charlatans and malevolent operators of Washington permeate the bureaucracies and the Congress, and the support lackeys in the media condone every dreadful deed they partake in because it validates their collectivist-statist ideology.

If Trump is going to go down in history as a modern day knight come to slay the Godzilla of tyranny in the federal government, then he must now know that this monster he is going after has many hideous heads, and it will fight back with the most outrageous lies and abominations conceivable. Trump may not be able to live up to Sir Galahad, the purest of Arthur’s knights; but he can clearly be a Sir Lancelot, the tainted but heroic knight of the Round Table.

Trump has the strength of personality to do this. He just needs to realize that most advisors among the Republican Party may express sympathy with his cause, but secretly will not endorse it and even work to sabotage it whenever possible. Thus they will be fake supporters. Reince Priebus was one such pseudo-supporter. 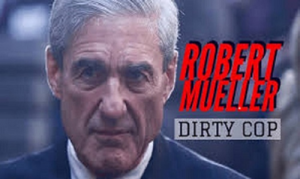 Under no circumstances, however, should Trump fire Mueller. This would cast doubt among many of his supporters out in the hinterland. He must use leverage on this Deep State cobra who is out to destroy him, his family and his agenda in any way he can. Mueller is the epitome of what statist politics is all about. Just look at the photo of him at the head of the Roger Stone piece cited above:

This is the face of Big Brother’s prosecutor-executioner, tyrannical, totally amoral, devoid of all principles, willing to smear the opposition with lies and the dirtiest of tactics, willing to get a conviction at any cost. Truth is not something that Robert Mueller is interested in at all. Partisan witch-hunting is what he is all about. He is the prosecutorial face of today’s Deep State, which is the foremost ally of the Deep State Swamp’s perpetuation.

The first step to end this nightmare is to let Sessions go and bring a man of great credentials to the post who is not compromised in any way, then reassign Rosenstein to some perfunctory position to which he is better suited. This will not alarm the country, but it will serve notice to Mueller that his days as a witch-hunter are over, and he had better gracefully bow out of his malignant pursuits.

About the Author: Nelson Hultberg

Nelson Hultberg is a freelance writer in Dallas, Texas and the Director of Americans for a Free Republic. A graduate of Beloit College in Wisconsin, his articles have appeared over the past 25 years in such publications as The American Conservative, Insight, Liberty, The Freeman, The Dallas Morning News, and the San Antonio Express-News, as well as on numerous Internet sites such as Capitol Hill Outsider, The Intellectual Conservative, Popular Liberty, and The Daily Bell. He is the author of The Golden Mean: Libertarian Politics, Conservative Values. Email: NelsonHultberg@afr.org Website: www.afr.org