Congressman Elijah ‘Crooked’ Cummings And Spouse Being Investigated By The IRS: Watchdog

According to Tom Anderson, director of NLPC’s Government Integrity Project, who uncovered the violations, “Rep. [Elijah] Cummings is demanding President Trump’s tax returns and financial records. It looks like he has some tax problems of his own.”

Cummings was once heavily in debt — in part due to hefty child support payments to his first wife and two other women he had children with.

While Congressman Elijah Cummings reserves his vitriol for all things Trump and he insists that the President should be impeached and removed from office, it appears Rep. Cummings has his own dirty secrets he’s careful to keep hidden.

A government watchdog group on Tuesday filed an official complaint with the Internal Revenue Service (IRS) against the Center for Global Policy Solutions (CGPS), a 501(c)(3) organization..Such complaints are routinely brought to the IRS for investigation. However what is unique about this specific complaint filing is that it accuses both U.S. Rep. Elijah Cummings, D-Maryland, and his current wife, Maya Rockeymoore Cummings.

CGPS is headed by Maya Rockeymoore Cummings, wife to Rep. Elijah Cummings (D-MD). In fact, a Conservative Base examination of the organization’s web site reveals that it is staffed by one employee, Mrs. Cummings. 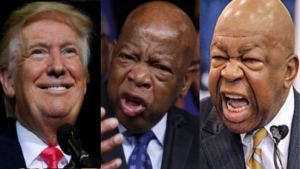 Mrs. Cummings is currently Chair of the Maryland Democratic Party and is a former candidate for Governor. Rep. Cummings is Chairman of the House Committee on Oversight and Reform which gives him considerable power to probe Republicans with whom he disagrees or with whom he has tremendous dislike — like President Donald Trump.

“I think he’s be aware of the complaint and the fact that certain Americans wish to see answers to the allegations that [Rep.] Cummings is just another fat cat politician making millions of dollars,” said former police detective and GOP campaign aide, Charles B. Thompson. “Cummings was once heavily in debt — in part due to hefty child support payments to his first wife and two other women he had children with.”

“Cummings is one of those so-called race-baiters who allow his own constituents to suffer years and years of poverty, violence and Chicago-style corruption,” Thompson, himself an African American. 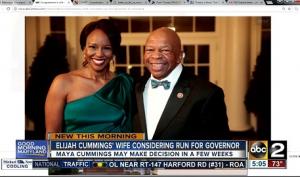 CGPS has received millions in grants from the Robert Wood Johnson Foundation and, in late 2017, was granted a million-dollar contract from the government agency, General Services Administration. The funds were purportedly provided to fight childhood obesity. The written complaint asks the IRS — with tongue-in-cheek — to investigate whether “its organizers are getting fat off the grants.”

While heading CGPS — which appears to be nothing more that a one woman Internet operation — Mrs. Cummings heads a for-profit consulting firm called Global Policy Solutions, LLC, whose operations appear to have been indistinguishable from those of CGPS. Once again, Mrs. Cummings is the only employee listed on the CGPS web site.

The two supposedly separate groups — the non-profit and the for-profit — have shared office space, telephones, etc., all of which are flagrant violations of the Internal Revenue Code. 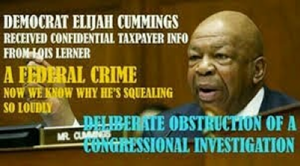 Another of the cited violations is a failure to provide or disclose a copy of IRS Form 990 when requested. According to Tom Anderson, director of NLPC’s Government Integrity Project, who uncovered the violations, “Rep. Cummings is demanding President Trump’s tax returns and financial records. It looks like he has some tax problems of his own.”

“To tell you the truth, many of my [law enforcement] colleagues believe Cummings is keeping the Trump-Russia Collusion nonsense on everyone’s mind so the elite media will have an excuse to avoid this latest Democratic politician’s hanky-panky.

Cummings has been struggling with serious financial problems after joining Congress over 20 years ago. His house was placed in foreclosure, at one point; he owed $30,000 in unpaid taxes to the IRS; and he was taken to court multiple times for thousands in unpaid debts. Cummings said his financial difficulties were due to his hefty child support payments.

The IRS produced this e-mail on April 2, 2014 – only days after Oversight Committee Members had taken new IRS Commissioner John Koskinen to task for withholding relevant e-mails. See video below.