“It is easy to go down into Hell; night and day, the gates of dark Death stand wide; but to climb back again, to retrace one’s steps to the upper air – there’s the rub, there’s the task.”  —Virgil, an ancient Roman poet

Never have so many tried so hard with such little effect.  Conservatives have had all the impact of bumper cars at an amusement park.  They keep bumping into each other with their own individual ideas, concepts and solutions on how to defeat the socialist Democrat horde but can’t seem to come together on one solution they can all rally around. 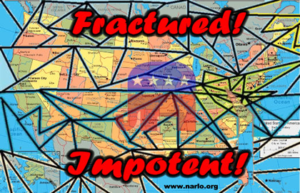 The enemy that conservatives are up against is powerful, intractable, uncompromising, vicious and mean.  Worse than that, they have the majority of the votes, mostly from government-dependent big cities.  That enemy owns the news and most of the journalists.  They are aided and abetted by academia and social media.

They have corrupted the military with socialist and LGBTQ nonsense and are on a mission to purge the ranks of extremists.  You know, like Trump voters.  The United States military, the most powerful fighting force on the planet, has gone “woke.”  Insane!

The socialist Democrats own Hollywood, comedians, the Oscars, the Grammies, the Emmies and the Tony awards.

Their flawed ideology is taught in public schools and colleges.

Socialist Democrats have infiltrated all of our institutions, including the secretaries and directors of government agencies and the deep state bureaucracy.

To keep us confused and fighting each other they work incessantly to divide us by race, gender, nationality, diversity, the economy, religion and rich and poor.

They are a malignant, metastasizing disease that has gone viral throughout the nation and the planet.

They are socialists, communists and fascists.

They have set up a two-tier justice system where they get off scot-free and the rest of us are subject to the law of the land.  (Hunter Biden or Hillary Clinton anyone?)  They are on a determined path to dominate the political class, the bureaucracy and the citizens by any means.  Their power is derived from taxpayer money that is used to buy off large percentages of the ignorant population for their votes.  Their recent $1.9 Trillion stimulus package was the latest example.

Their goal is one-party rule, sometimes called an Absolute Democrat Monarchy, or Dictatorship.  One of their methods to accomplish one-party rule is the cancel culture where they use the entities they control to shut down conservative speech or ideas and concepts that don’t toe their party line or conflict with socialist or scientific dogma.

To demonstrate just how powerful they are and how difficult it will be to defeat them, we wrote three articles that describe the obstacles that conservatives face.

“Just How Are You Going to Unravel This Banana Republic?” 7/5/14

You don’t win a war by being nice or confront the enemy with compromise and appeasement.  You win a war with sound battle strategy and a superior force.  The people are that superior force provided they have a strong, charismatic leader, are organized, well funded, well equipped and united in mind and spirit.  We already have the guns and the spirit.  We lack the rest.

There are many failed democratic governments that morphed into dictatorships like moths into worms.  The devastating trail of collapsed democracies has led to mass graves full of millions of innocent civilians, dead soldiers and patriots, each praying for a better life and freedom.  The most recent Democrat failures in the 20th Century are Nazi Germany, North Korea, Iraq, Ghana, Venezuela, Uganda and Libya.  They slid into a dictatorship because the masses weren’t paying attention to what their leaders were doing, or worse, they were hiding in their homes, afraid to get off the couch.  Could America, England, Canada and Australia be the next victims?

Dante, an Italian poet, writer and philosopher in the 14th Century said: “The darkest places in hell are reserved for those who maintain their neutrality in times of moral crisis.”

The masses are generally cowards and will bend to the will of their masters. (Masks anyone?)  Remember, it is estimated that only about 3% to 6% of the Colonials took up arms against the British in 1776.  That means just 3% to 6% of Americans gave birth to freedom for and on behalf of an estimated population of 2,700,000 Americans, many who were loyal to King George III.

There are thousands of small to medium size conservative groups in America, each trying to do their own thing in the hopes of making a difference.  God bless them.  Unfortunately, their efforts are too small to have any impact against the entrenched and powerful enemy we face.  We know.  For 15 years we have expended thousands of hours in that pursuit, but to no avail.  When the members of the group see that they aren’t getting anywhere, they fade away into the shadows, never to be seen again and the organization closes its doors.

Even large groups like the NRA or the Tea Party Movement, with thousands of members, haven’t stopped the steep dive into socialism.  Obviously, conservatives are doing something wrong, or they are so splintered,  fractured and divided as to be ineffective.  Conservatives have the numbers to be successful.  The only thing that is keeping them from winning is they keep getting in their own way.

What is needed is a major convention of conservative group leaders (COCL) that will come up with a peaceful solution to unite all American conservatives and the 75,000,000 Trump voters, under a single plan to strip the socialist Democrats of their power and render them impotent.

Any workable solution would have to include some basic elements, which we have outlined HERE.

Conservatives can win this battle against socialism ladies and gentlemen, provided they aren’t splintered, fractured and divided.