Home/April 2021, Opinions/Conservatives Had Better Learn How To Start Saying No!

Conservatives Had Better Learn How To Start Saying No!

“Civil disobedience, as I put it to the audience, was not the problem, despite the warnings of some that it threatened social stability, that it led to anarchy. The greatest danger, I argued, was civil obedience, the submission of individual conscience to governmental authority. Such obedience led to the horrors we saw in totalitarian states, and in liberal states it led to the public’s acceptance of war whenever the so-called democratic government decided on it.  In such a world, the rule of law maintains things as they are. Therefore, to begin the process of change, to stop a war, to establish justice, it may be necessary to break the law, to commit acts of civil disobedience, as Southern blacks did, as antiwar protesters did.”   ― By Howard Zinn, from “You Can’t Be Neutral on a Moving Train”

God knows government and special interests that have aligned with government, have given millions of Americans many reasons to engage in civil disobedience.  In fact, civil disobedience is long past due.  Unfortunately, the passiveness of the American people seems to know no bounds and they will bow down to anything that government demands.  (See:  “Why On Earth Do Americans Put Up With It”) 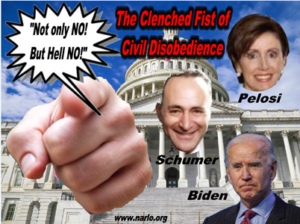 From unnecessary lock downs, to face masks, to the possibility of vaccine passports, to millions of laws, rules, regulations, restrictions, ordinances, rising gas prices, rising taxes, an exploding national debt that will trigger massive inflation, along with wide-open borders, all brought to you by the socialist Democrat ruling class who have lost their minds and forgot what country they live in, Americans are about to get hammered like never before.  But where is the push back?  Where is the resistance to tyranny?  When will rampant government corruption be fully exposed for all to see?

At least one person is saying NO!  He summed it up in a message to a couple of state legislators regarding a proposed bill to raise property taxes.  He said and we quote:

“So let me understand what you are trying to do with this House Bill.  You want to raise property taxes even though thousands are out of work due to the virus situation.  You want to raise taxes even though millions have been spent on the homeless and nothing has improved.  You want to raise taxes even though the minimum wage has increased and instead of helping, many restaurants have gone out of business.  So instead of raising income levels, many are now without jobs.  You want to increase taxes while inflation is showing its ugly head, with fuel prices increasing every day.  By the way, how is it that electric powered vehicles do not pay any road tax, and to add insult they get a tax credit?  So you want to increase property taxes while small businesses can hardly keep their doors open.  A local bakery, nearly one hundred years in business, just closed their doors.  You want to increase property taxes even though you have allowed thugs to take over part of a major city, all the while  supporting de-funding the police.  This is insanity at its peak.  Raising taxes is the easy thing to do, cutting costs takes much more skill and commitment.  Taxes are bleeding us dry and it is time to say NO MORE.

Another person had the guts to say NO! by writing the following message to the youngsters in our midst:

”Tell that to the 33,686 American soldiers that died in the Korean war, or the 58,148 service members that died in North Vietnam and Cambodia”. (Note: This entire war was mishandled by “intellectual giants” that know nothing about military tactics. Remember McNamara, the idiot that insisted on one aircraft for all three services, the F-111. A TOTAL FLOP.”)

”Tell that to many of our military that are in wheel chairs and will never walk again.”

”Tell that to the 48,744 individuals that committed suicide last year because that was the ‘only way out.’  Tell that to the 841,000 people that died from drug overdose since 1999, drugs that came mostly from the Mexican drug cartels due to Democrat open border policies.”

”So everything will be ok?  Think so?  These facts are no laughing matter that you can just ignore as trivial.  Get your head out of you’re a …s and set your iPhone aside for a few minutes:  Everything will NOT be ok.  Not one, not one socialistic country has EVER SURVIVED and yet that is where we are headed.  The American people are letting it happen right before their very eyes.“

”It is called history, but I guess you have to be able to read and think to proceed in that direction.  So these ‘children’ actually believe they are getting an education.  It isn’t education, it’s ‘brainwashing.’”

”We have corrupt government, with a corrupt congress.  We have a corrupt election process.  The people will become slaves.  Hey children, still think everything will be ok?”

”It’s a good thing that most of the guns are held by conservatives.”

This guy said NO!.  Why aren’t other Americans saying NO!?

Did Americans say NO! when the Dem’s passed a $1.9 Trillion Covid stimulus bill that wasn’t Covid relief but instead was payoffs to Democrat donors and constituents?  They are now about to pass a $2.25 Trillion “infrastructure” bill that isn’t an infrastructure bill but just another dump into the laps of Democrat friends, associates and voters.  Will Americans say NO!?

Did Americans say no when Biden signed an executive order that opened up our southern border to tens of thousands of poor, indigent, uneducated, Covid-infected peasants that has turned into a major immigration crisis?  Will they say NO! when the Democrats grant amnesty to 22,000,000 illegal aliens?  (See: “Illegal Aliens Have More Rights Than American Taxpayers”)

Where were Americans when the Progressives turned public schools from objective learning, to centers of social, environmental and one-world indoctrination?  Subjectively vague social equity now takes priority over math, reading, writing, geography and history.  That’s nuts if not patently evil.

Why didn’t Americans say NO! when Biden signed an executive order that forced girl’s sports to compete with male participants just because some male thought he was a female?

Did Americans say NO! when Democrat-run state and city governments promised and paid huge un-funded pension benefits to government employees to buy votes, sending the states and cities headlong into bankruptcy.  Now they have to be bailed out by Republican-run, fiscally responsible, red states.

Will Americans say NO! when the Democrats repeal the Electoral College and the Senate filibuster?

Will they say NO! when the Democrats are able to grant Washington DC and Puerto Rico statehood, thereby locking up America into one-party rule in perpetuity?

Will they say no when Democrats are successful in packing the U. S. Supreme Court with their own liberal cronies?  If they are successful, the U. S. Constitution will be cut to shreds, all because the people refused to say NO!

Will Americans finally say NO! to the fraud that is Climate Change and the Green New Deal that is just more socialist hogwash, cooked up by Democrats to control the masses and transfer the wealth?  (See: “Climate”)

Treachery is too kind of a word for what socialist Democrats have done and are doing to this nation.  Treason would be much more appropriate.  The only fitting response to their treason is massive civil disobedience.

Henry David Thoreau went further on the subject of civil disobedience.  “Thoreau asserts that because governments are typically more harmful than helpful, they therefore cannot be justified.  Democracy is no cure for this, as majorities simply by virtue of being majorities do not also gain the virtues of wisdom and justice.  The judgment of an individual’s conscience is not necessarily inferior to the decisions of a political body or majority, and so it is not desirable to cultivate a respect for the law, so much as for the right.  The only obligation which I have a right to assume is to do at any time what I think right….  Law never made men a whit more just; and, by means of their respect for it, even the well-disposed are daily made the agents of injustice.  Thoreau adds, ‘I cannot for an instant recognize as my government [that] which is the slave’s government also.’”

The government, according to Thoreau, “is not just a little corrupt or unjust in the course of doing its otherwise-important work, but in fact the government is primarily an agent of corruption and injustice.  Because of this, it is ‘not too soon for honest men to rebel and revolutionize.’” (Source:  Wikipedia)

Eventually, after years of in-effective peaceful protests or civil disobedience, Americans will have to say NO!  But history has shown us that the people will have waited so long that their NO! will have to come out of the barrel of a gun in open revolution.

There is nothing worse than an American, an American mind you, that would shrink from his or her duty and obligation to preserve, protect and defend freedom and the Constitution of the United States.  There is nothing worse than an American who refuses to acknowledge the approaching danger and does nothing to protect his or her spouse and children from that danger.  Why do Americans look the other way when their own freedom hangs in the balance?

Easter is a time of tribute, reflection, awareness and resurrection.  In the spirit of Easter, we encourage all Americans to take up the fight to “resurrect” freedom and restore the greatest nation ever to be conceived in liberty since civilization began some 6,000 years ago, by saying NO! to tyranny and corruption.  If we spent just half the time defending freedom as we do practicing our religion, America would still be a free country.

If you really want to say NO! to government tyranny and corruption, we’ve  designed a powerful tool for that purpose.  We call it “The Mandate” from “We The People.”  Take the time to review it and then follow the instructions.  It doesn’t require a signature.  We have created a PDF file and a WORD file of “The Mandate” for those who are interested.  Make it go viral so that it will have national impact.  At least do something that will show you intend to say NO! and mean it.