Surround yourself with smart, dedicated people – to build something isn’t a one-man show. It’s more important to have smart people who really believe in what you’re doing than really experienced people who may not share your dream. —Niklas Zennstrom Skype founder 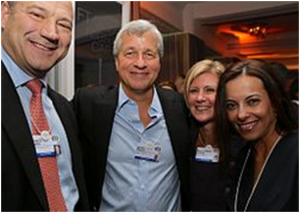 Rumor has it that Reince Priebus might be on his way out as the President’s Chief of Staff, and one of the names coming up as a possible replacement is Dina Habib Powell. Sources have stated, “Reince is responsible, ultimately, for the rollout of the immigration executive order. He failed to get AG Sessions on the calendar in the Senate in time for what he knew would be a highly controversial executive order (the EO travel ban).  He was supposed to be this wizard in dealing with congressional Republicans, but has not been successful in getting anything serious done.”

It’s doubtful that Reince will be replaced, but Dina Habib Powell is someone we need to keep an eye on.

Who is Dina Habib Powell?

Dina Habib Powell, 43, a former executive with Goldman Sachs, is the first Arab-American to join the Trump White House.  Powell joined Goldman Sachs as a managing director in 2007 and became partner in 2010.  She was born in Cairo, Egypt, and immigrated at age four with her parents to Dallas, Texas.

Powell served as the assistant secretary of state for education and cultural affairs during President George W. Bush’s administration and became the youngest person to direct the White House’s personnel office at 29, while working closely with Vice President Dick Cheney, and Karl Rove.

Powell was named the U.S. Deputy National Security Advisor for Strategy on March 15th.  She replaces K.T. McFarland who was handpicked by former NSA Chief, General Michael T. Flynn.  McFarland is a Fox News security pundit and previously worked as a public affairs official in Ronald Reagan’s Pentagon. Like her new boss, H.R. McMaster, Powell is also a member of the Council on Foreign Relations, but then, so was K.T. McFarland.  However, McFarland’s views on Islam more closely matched General Flynn’s.

Dina Powell is expected to work closely with national security adviser H.R. McMaster and focus on long-term issues. She is also expected to help lead an interagency policy process working with Secretary of State Rex Tillerson, CIA Director Mike Pompeo, and Defense Secretary James Mattis, all of whom seem soft on Islamic terrorism.  Powell will also continue to work with Ivanka Trump and Jared Kushner on economic initiatives, but the NSC role is expected to take up much of her time. 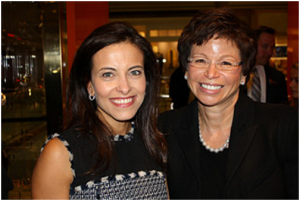 According to leftist rags like Politico, who get their approval for articles from the Democratic party, Powell has a strong personal relationship with Valerie Jarrett, the former co-president with Barack Obama.  Jarrett, who was born in Iran, and is widely rumored to be the architect of the Iran Nuclear Deal, reportedly has moved into Obama’s home in Washington, D.C. to lead a resistance movement against Trump’s efforts to reverse Obama’s foreign and domestic policies. Powell is also a friend of Ivanka Trump and is her “woman in the White House.”

Gene Sperling, a former Clinton and Obama economic adviser, is another close friend of Powell’s. Republicans who have worked with Powell before have offered nothing but praise for her, including former secretary of state and CFR member, Condoleezza Rice.  Ahem.

Richard C. Powell is the ex-husband of Dina Powell, and he is the President of Teneo Strategy.

On the official website, Teneo describes itself as, “Exclusively dedicated to advising the leaders of the world’s most complex organizations. Our 12 operating divisions collaboratively solve the most pressing reputational, transformational & capital markets issues.”

Teneo Holdings is a global consulting firm with deep Clinton connections. Teneo serves in an odd relationship to Clinton Inc.  Doug Band, Mr. Clinton’s right-hand man for many years, is a Teneo founder.  Band also helped Bill Clinton found the Clinton Global Initiative, (which has now closed its doors) and he worked for the William J. Clinton Foundation.

According to the Teneo website, Band was also “part of the negotiation team that handled all aspects of Hillary Clinton becoming Secretary of State.”

Secretary of State Clinton’s former Economic Envoy to Northern Ireland, Declan Kelly, is a Teneo co-founder and its CEO. Teneo isn’t really well known other than in the upper echelon of the elite, with only a few known corporate clients. It is best known for its relationship with the Clintons and the Clinton Foundation.

In addition, Bill Clinton himself formerly served in a paid advisory role for Teneo. However, in 2012, his advisory role ended as he became a client of the firm. A spokesman for the company, Matt McKenna, told Politico that Bill Clinton remains “a friend and an unpaid adviser to Teneo and its founders.”

Too Close for Comfort

It’s a well-known fact that very few of the power brokers in Congress are in agreement with our President on many of his policies.  They are fighting him on almost everything he wants to do, and none of them are really pitching in to help.  As far as I’m concerned, the Conservative Caucus represents the only members who are really for the American people, and there’s only 29 of them.

Donald Trump’s administration has far more globalist neo-cons than I would like, but we have to step back and look at who is recommending these people and who is even vetting them.

Here’s what we know…Dina Habib Powell was working for Ivanka Trump regarding women’s issues.  NSA Chief McMaster took a liking to Powell, and both are CFR members.  Ivanka was instrumental in the approval of Mike Pence for Vice President.  Pence is in charge of the transition team, and probably the team who does the vetting of nominees as well.  Thus, it seems highly likely that the Kushner’s and the Vice President actually were pivotal in choosing Powell for Deputy NSA for Strategy, along with McMaster, of course.

Many of the people chosen for Trump’s administration have relationships with the previous president and his people. Even Paul Ryan’s wife is an Obama supporter.  I find this just a bit too close for comfort.  People tell me there’s not enough conservatives to choose from.  Surely every nominee doesn’t have to be a billionaire, and by the way, what happened to Rudy Giuliani?

Our businessman President is very new at politics, and it’s lonely at the top when surrounded by so many political globalists and lobbyists who would have preferred Hillary Rodham Clinton.   He has already accomplished a great deal, despite the many roadblocks thrown in his path. (We’ll talk about that in another article.) Congressman Steve King, a Cruz supporter, is bashing our President for not getting enough done, but…

Trump has just been our President for three months, and he’s certainly not getting the help he needs from Congressional Republicans, and now, Ryan is claiming there’s no money for a wall, after presenting us with Obamacare lite.

It’s not just up to our President, it’s up to all of us who voted for him to call and email these reps and tell them what we want.  It’s also helpful for us to privately tweet Trump to let him know exactly where we stand on these issues.

Call the White House hotline and tell them what you want, and why it’s so important.  Here’s the number, 202-456-1111.  Pray for Donald J. Trump daily, for guidance and wisdom from above.  He has a huge job ahead of him, and no one in DC is making it easy for him.