Home/May 2018, Opinions/DACA Dispute Rages At The U.S.-Mexican Border And In Washington

DACA Dispute Rages At The U.S.-Mexican Border And In Washington

The Deferred Action for Childhood Arrivals (DACA) program was initiated by an executive order signed by former President Barack Obama in 2012. It allows certain people who came to the U.S. illegally as minors to be protected from being lawfully deported. Recipients, affectionately named Dreamers by liberal-left politicians and their sycophants in the news media, were encouraged to request “deferred action” for a period of two years, noted Dr. Lyle Rapacki, a protective intelligence and assessment specialist and member of the Association of Threat Assessment Professionals – Arizona ATAP

“Deferred action is a use of prosecutorial discretion to defer removal action against an individual for a certain period of time,” U.S. Citizenship and Immigration Services stated. “Deferred action does not provide lawful status.”

The unconstitutional law drafted by then President Obama’s inner-circle without any Congressional input, which then became operational allowing otherwise illegal aliens into the United States unchecked which continues despite President Trump’s new orders and the actions of his Border Patrol agents, Immigration and Customs Enforcement (ICE) officials, and other Homeland Security Department directorates.

“The Democratic Party cares more about the ‘rights’ of lawbreakers, gangsters and terrorists, than 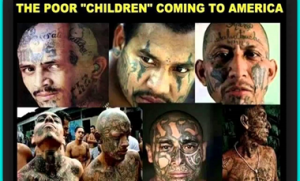 they do about American citizens. They believe that changing the nation’s demographics will give them more and lasting power to chip away at the U.S. Constitution and the capitalist economic system,” warns political strategist Michael Beker.

“As much as the Trump Administration has accomplished to bring law and order to our Nation’s Borders; to STOP the illegal and dangerous flow of people from across the world who simply show-up at our borders, and step across for a wide range of immediate citizenship benefits is stunning to say the least!  The DACA policy shoved upon America by the Obama crew, and Obama himself, is a disaster, dangerous, and disdainful to American sovereignty,” notes Dr. Rapacki, founder and CEO of Sentinel Intelligence Services.

Led by political leaders in the State of Texas, six other states have joined in filing lawsuit to stop this unconstitutional national security practice and policy.

Sadly, Arizona is not one of the States fighting DACA. With their porous southern border, Arizona 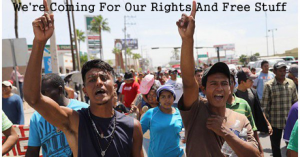 government officials should stand shoulder-to-shoulder with Texans fighting to curtail the onslaught of of gangs many of whom are prisoners’ let loose from cells in their countries of origin so they could become America’s problem, the pathetically ill and uneducated, and Jihadi from numerous Middle-eastern countries at war with America.

But Arizona is silent.

“Providing for the security of our citizens is the highest order of government at the national, state or local levels.  Those in public office who do not demonstrate this concern should be replaced!” declared Rapacki.

Border Patrol Agents are not allowed to properly do their job at the Border because of ridiculous liberal (Democrat) laws like Catch & Release. Getting more dangerous. “Caravans” coming. Republicans must go to Nuclear Option to pass tough laws NOW. NO MORE DACA DEAL!