“Naturally, the common people don’t want war … but after all it is the leaders of a country who determine the policy, and it is always a simple matter to drag the people along, whether it is a democracy, or a fascist dictatorship, or a parliament, or a communist dictatorship. Voice or no voice, the people can always be brought to the bidding of the leaders. That is easy. All you have to do is to tell them they are being attacked and denounce the pacifists for lack of patriotism and exposing the country to danger. It works the same in every country.”  —Hermann Goering-leading member of the Nazi Party

Decoration Day, now Memorial Day is a day of solemn remembrance for those who gave their lives for our country, for all our veterans, and even for our family members who have gone before us.  It is not a weekend of bar-b-ques and the beginning of summer, yet that is what it has become.  As a child, I went with my grandparents to the cemetery with loads of flowers to be planted or put in vases on the graves of our loved ones.  It was a day of remembrance and much planning went into the care and love bestowed on those many graves.

Don’t take that from our true heroes, and now heroines.  This day belongs to them.  Honor them; they deserve it.

The following article was written when Barack Hussein Obama was America’s choice for president.  What I felt then is fitting for today and the illegitimate president who now occupies our White House. For those new readers, there is history within that is of great importance.

There are only two holidays a year that bring me to tears.  The first is Decoration Day (now Memorial Day) and the second is Independence Day, July 4th.  Last July I wrote an article entitled Real Americans.  I told of the loss and heartbreak I felt when I saw the flags waving and heard the firecrackers.  The loss of what we once had and what we have become is overwhelming.  The same feeling is present with Decoration Day.

Decoration Day started with a commemoration to the fallen Union soldiers of the Civil War.  In the south, southern ladies’ groups commemorated the fallen on different days than the holiday of the north.  However, by the 20th century, all American soldiers who had fallen in war were remembered on the last Monday in May, although originally May 30th.  Decoration Day meant placing flowers on the graves of the fallen, but soon became a memorial for all family members who had passed.  Today, those who know the real meaning of the holiday visit the cemeteries not only to decorate the graves of fallen American soldiers, as well as those who served our country, but also to remember our deceased ancestors.

Decoration Day was officially changed to Memorial Day by Federal law in 1967.  On June 28, 1968, the Congress passed the Uniform Holidays Bill, which moved four holidays, including Memorial Day, from their traditional dates to a specified Monday in order to create a convenient three-day weekend. The change moved Memorial Day from its traditional May 30th date to the last Monday in May. The law took effect at the federal level in 1971.  This has no doubt changed the tenor of a day of remembrance into one of a spring-into-summer three-day weekend holiday, which has caused the solemn honor of the original commemoration to be lost.  Japanese Nisei, Daniel Inouye, Hawaii’s former Senator, and a WWII veteran had tried every year to return the holiday to May 30th. 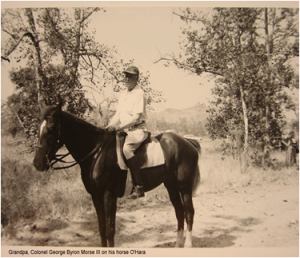 Today, this holiday of commemoration has become one of barbeques, picnics, baseball and swimming.  It no longer is a day of solemn remembrance of our nation’s loss.  When I think of all those who have served, I remember those in my own dear family.

My maternal grandfather served in the Army as a cook in WWI.  His two sons, my mother’s older and younger brothers and my uncles, both served in WWII in Europe and in Germany respectively.  I remember my Uncle Bob telling me about how he hitchhiked across Czechoslovakia to see his cousin, Norm, who was also in the Army.

My paternal grandfather graduated from the Presidio (officer’s training) in 1917 with the Army Cavalry.I still have the humorously written program for his graduation dinner.  His degrees were in international law and French.  He married my grandmother that same year and went off to war.  His older brother was also a soldier in WWI.  In a nine-page typewritten letter my Baptist preacher and physician great-grandfather wrote to his former church in Bozeman, Montana, he mentioned how his wife worried and prayed for her two sons in France. 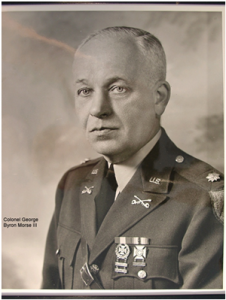 My grandfather remained in the military for many years.  I obtained all his military records through my congressman.  He was retired prior to WWII, but after Pearl Harbor and at the age of 50, he re-enlisted.  He was in charge of a German prisoner- of-war camp for a year or so.  The photos of this camp and the inmates look as though it was a great holiday for the Germans.  These original photos are at the Mazal Holocaust Library in San Antonio, Texas.  At the close of WWII, my grandfather, Colonel George Byron Morse, was in charge of the MPs at Nuremburg.  His Army Cavalry uniform and his boots are also at the Mazal Holocaust Library along with documents and photos.

After the war, my grandparents were very concerned about the second generation Japanese Americans who fought on our side during WWII, the Nisei.  My grandmother was the inspiration for a veteran’s hall for them and the Nisei Veterans’ Memorial Hall was born.  My grandfather brought it to fruition and his picture still hangs prominently in their veteran organization.

The 100th/442nd Regimental Combat Team, composed of approximately 14,000 Japanese American soldiers, became the most decorated unit for its size and length of service in American history. Among their many awards, they earned eight Presidential Citations, over 9000 Purple Hearts, and 21 Medals of Honor.

The 100th/442nd fought many battles. One of the most historic was the Rescue of the Lost Battalion in October 1944, when the unit led a heroic drive through German lines in the Vosges Mountains to rescue 211 surviving soldiers of the 36th Texas Division. For this the governor of Texas named the Nisei soldiers \”Honorary Texans.\” In 1945, the courageous actions of the 100th/442nd were critical in breaking the German Gothic Line. They fought the Germans through intense combat and liberated towns such as Bruyeres, Biffontaine, and Belvedere. They also helped free Holocaust victims from a Dachau concentration camp.

Approximately 6,000 Japanese Americans served in the Pacific Theater in the Military Intelligence Service (MIS) of the US Army. These soldiers utilized their knowledge of the Japanese language and culture to defeat the Japanese military in the Pacific. General Douglas MacArthur’s intelligence chief, Major General Charles A. Willoughby, estimated that these contributions shortened the war by at least two years and saved countless lives in the process. For this, the MIS was awarded a Presidential Unit Citation.

When my retired, aging, California grandparents needed assistance, the Japanese were there to help them in every way.  At their funeral masses, the priests were both Japanese.  The eulogies from these brave Nisei are simply beautiful and showed what great love these Japanese American war heroes had for my paternal grandparents.

Today is a Different Story

The Presidio today is nothing like what my grandfather would envision.  Congress voted in 1989 to end the Presidio’s status as an active military installation and on October 1, 1994, it was transferred to the National Park Service, ending 219 years of military use and beginning its next phase of mixed commercial and public use.  Sadly that use is now part and parcel of the UN Agenda 21 program of destroying national sovereignty and our liberties.  In 1996, the United States Congress created the Presidio Trust to oversee and manage the interior 80% of the park’s lands, with the National Park Service managing the coastal 20%.

In 1993, the Gorbachev Foundation USA was invited to sink roots at the Presidio as part of the post’s conversion from the headquarters of the 6th U.S. Army to a national park.

From the website, Mikhail Gorbachev, Creatively Marketing Global Communism, comes this statement regarding Gorbachev’s State of the World Forum, “Former Soviet Communist Party boss Mikhail Gorbachev, founder of the State of the World Forum six years ago, used a $5,000 per person gathering of the world’s political and business elite to plea for the United Nations to adopt a Soviet-style “central authority” to manage the world’s business and environmental concerns.”

“The collapse of the Soviet Union as presented in the western media was a fraud. The Soviet Union didn’t collapse and communism didn’t die. They just reorganized. This is Gorby’s goal for the United States… and that’s what the UN program of regionalization is about. The movement is to dissolve the United States as a nation and then to break it up into areas of regional governance under an unelected continental government similar to the European Union.”

To say it more succinctly, here is a letter my dear friend Ruth wrote in comment of the article, The Price of Freedom, “This Memorial Day, I mourn the lives of the tens of thousands of our troops, who are maimed and disfigured. I mourn the lives of the troops still stuck in the hell holes of Afghanistan and Iraq and those engaged all around the world in illegal interventions and wars of aggression, greed and empire building. I grieve for the returning veterans, whose minds are so broken, upon contemplating the horrors they have witnessed and the true nature of these wars, they are committing suicide in shocking numbers. Those, who gave all, may be the lucky ones. Unfortunately, these brave young men and women are not fighting for our freedom; they know it, and you know it. They are fighting to stay alive. They are mere pawns of the Military Industrial Complex. IT IS TIME TO BRING THEM ALL HOME NOW.”