An independent socialist from Vermont, Sanders is running for president as a Democrat and is the only officially announced rival at this time to Hillary Clinton.

Sanders’ office responded this afternoon that the article was merely a failed attempt at satire.

It was included in a feature about the senator posted by liberal/progressive Mother Jones earlier this week, which called the Sanders-authored tract “a stream-of-consciousness essay on the nature of male-female dynamics.”

At the beginning of the essay in question, called “Man and Woman,” which originally appeared in the Vermont Freeman alternative newspaper, Sanders stated the following:

“A man goes home and masturbates his typical fantasy. A woman on her knees, a woman tied up, a woman abused.

A woman enjoys intercourse with her man — as she fantasizes being raped by 3 men simultaneously.”

According to CNN’s Jake Tapper, the senator’s office described the newly surfaced essay as “a dumb attempt at dark satire in an alternative publication… intended to attack gender stereotypes in the 70s.” Not everyone on Twitter is buying that explanation, however.

So far, the mainstream media has not run with the story in any significant way. Today, for example, the New York Times published a story lauding Sanders’ “unabashedly progressive message” and described the senator at age 73 as “fit and quick-witted.” 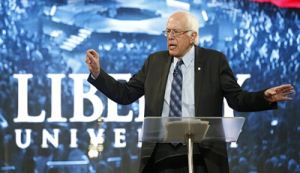 CNN similarly explained that “Sanders, an agitator who doesn’t suffer fools, political opponents or journalists gladly, is testing whether the kind of populist, liberal agenda that gave him 75 [percent] approval ratings in his adopted home state can catch fire nationwide.”

The Media Research Center, a conservative watchdog group, observed that it would be highly unlikely that the mainstream media would give any Republican a pass for this kind of lurid prose (no matter how far it goes back), especially given the rape-comment controversy that imploded Todd Akin’s 2012 campaign in Missouri for U.S. Senate.

“It is unclear where Sanders acquired his early expertise on male and female sexual desires. But what is clear is that had Ted Cruz or Rick Santorum wrote something along these lines — even 40 years ago — the media wouldn’t stop talking about it for weeks.” 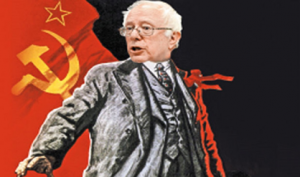 Cooke continued: “Bernie Sanders wrote these words — and a lot of drivel besides – in 1972. Maybe he was young and foolish. Maybe he was a different man back then. Maybe society was unrecognizable and he had bought into all sorts of faddish psychology. Who knows? And frankly, who cares? Sure, the Democratic party would crucify a Republican for the same offense. But they shouldn’t. A society in which people are drummed out of politics for things they wrote 43 years ago is an ugly society indeed. Sometimes the best way to address hypocrisy is to take the high road…”

Alluding to the double standard, Bloomberg reporter John Heilemann told his With All Due Respect co-host Mark Halperin that “I now we both agree about this, which is that if a Republican, any Republican candidate wrote an essay like this, whether they were 16 years old and high on dope or whether it was two weeks ago, it would be a huge scandal. So I think we need to hold Bernie Sanders to the same standard, and people need to ask him tough questions about it.”

“I happen to know some United States senators, one who’s on the other side who’s pretty aggressive,” Trump said, according to The Times. “I‘ve seen that person in some very bad situations.” “He would not identify whom he meant, but he did later single out Senator Richard Blumenthal, a Democrat from Connecticut, a favorite target, for misleading the public for years about his military service during the Vietnam War,” The Times reported.

“This guy lied when he was the attorney general of Connecticut. He lied,” Trump said, according to The Times.

In 2010, The New York Times published an article that reported Blumenthal said he had served in Vietnam, “implying he had fought in the war, when in fact he served in the Marine Reserve in the United States at the time.”

On Monday, Trump continued on the theme.

“He said he was a war hero, (that) he fought in Da Nang Province,” Trump said. “We call him ‘Da Nang Richard.’ … He never went to Vietnam.”