“The Brennan Center’s seminal report “The Truth About Voter Fraud” conclusively demonstrated most allegations of fraud turn out to be baseless — and that of the few allegations remaining, most reveal election irregularities and other forms of election misconduct. And numerous other studies have reached the same conclusion.” — Brennan Center for Criminal Justice 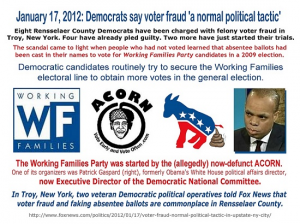 The Center is named for the U.S. Supreme Court Associate Justice William J. Brennan, Jr. who is regarded as one of the most liberal-left justices in the highest court’s history.

Despite the bombardment of news stories that support the Democratic Party’s narrative on voter fraud, President Trump pushed for a commission to investigate voter fraud in the last election almost from the moment he swore the oath of office.

While we would expect the left to fight hard against anything the President says for the sake of obstruction, this one seems to hit a button with them. Your instincts already tell you that this is likely a problem, but the left seems to have a lot of evidence and arguments to back their resistance, according to an American Liberty Report on voter fraud.

The arguments are numerous and vociferous. First, Democrats are calling the investigation a look into voter suppression. They have long argued that actions taken to decrease illegal voting only serve to prevent eligible voters from participating in democracy. They also point out that these laws disproportionately affect low income and minority groups.

The left also says that the investigation is an assault on democracy itself and that questioning the legitimacy of election results is bad for the process. Somehow, the irony of this statement eludes them. They also like to quote a study that suggests voter fraud is extremely rare and doesn’t require action. Finally, they claim that the investigation is a violation of privacy rights, and it is on that ground that multiple states have refused to provide the requested information.

Take a look at each of these arguments individually:

The left claims that voter ID laws restrict voting and disproportionately impact minorities. These are both true statements that are misleading nonetheless. First, the laws are absolutely designed to suppress votes: illegal votes. But, we can’t know how effective they are without President Trump’s investigation.

Second, the minority statement is technically true. When you compare voter turnout across states that do and do not have ID laws and then normalize those numbers by population distribution, then you find that a larger percentage of black voters are skipping the polls, and it correlates with “voter suppression” laws.

Did that sound complicated? It has to in order to mislead you. Here’s the raw truth. Voter ID laws makes it so voting requires the same identification as buying alcohol. The same groups that would struggle to vote would also struggle to drink, yet you don’t see that correlation in the studies.

More importantly, greater than 50 percent of “suppressed” voters are low-income, working-class whites. This is a group that staunchly favors President Trump. The disproportionate effect is just an extension of the size of population. If something impacts 50 black and 50 white voters, then because there are fewer black Americans, it disproportionately affects them. In reality, Trump likely lost more votes to ID laws than Clinton did.

A few years ago, there was a study that showed how rare voter fraud was. The left quotes it all the time. The problem? It only looked at a very narrow and specific type of fraud. According to the study, there have been fewer than a dozen cases across the nation of people casting illegal votes by posing as the deceased. That’s the only thing the study measured. Within the last year, a separate study looked at voter eligibility in Virginia. It found that roughly 2,000 ineligible votes were cast and counted in 2016 alone, and it is the basis for the new investigation. Imagine how much larger that number might be in border states like California.

It is true that turning over the information requested for the investigation would include names, addresses and other sensitive personal information. It’s also true that said information is already being held and stored by the states. How is handing that data to the federal government an invasion of privacy?

The notion that you have nothing to fear if you have nothing to hide can lead to dangerous thinking. In this case, it’s right on the money. There is already irrefutable evidence that widespread voter fraud is happening, and the one study that actually happened suggests that it could be on the scale of millions of votes.

The left lost their core demographic when they abandoned working-class America. They need illegal votes to stay ahead. They are fully aware of what they have been doing, and they know that proof of their corruption will be their end. They will fight every step of the way to prevent any commission or study from further revealing the truth, but they will ultimately fail.