Democrats Have Turned Normal and Common Sense Into Raw Sewage

“Identity politics rejects the model of traditional give-and-take politics, presupposing instead that the most important thing about us is that we are white, black, male, female, straight, gay, and so on. Within the identity-politics world, we do not need to give reasons—identity is its own reason and justification.  Because identity politics supposes that we are our identities, politics does not consist in the speech, argument, and persuasion of normal politics but instead, in the calculation of resource redistribution based on identity—what in Democratic parlance is called ‘social justice.’”  —Joshua Mitchel, professor of political theory, Georgetown University.

There are certain core attributes to any culture that allow that culture to survive, prosper and live in peace with each another.  The natural “glue” of family is one of those attributes.  Dissolve that “glue” and the family and a nation fall apart, as we have seen in the bowels of big cities.  Democrat policies under “social justice” have driven a wedge into the “glue” of the nuclear family but they either don’t seem to realize it. or don’t care.  (See: “Democrats Have And Are Tearing The Nuclear Family Asunder”) 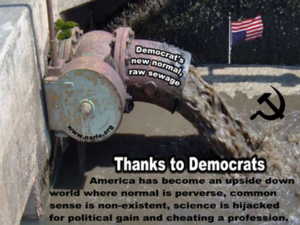 One of the major elements of the nuclear family is the raising of children.  This is a delicate task that requires basic common sense and uncommon patience.  What goes into the minds of the family’s children is of vital importance to the well being of a nation.  Fill their minds full of socialist mush and identity politics, which is happening in our public schools and colleges now, and you get ignorant, brainwashed advocates for failed socialism, biased journalism and millions of culturally blind Democrat voters.  Fill their minds with the importance of honor, objective truth and the foundation of freedom, self-reliance and personal responsibility and you get American patriots who will preserve, protect and defend the Constitution of the United States and lead a nation into peace and prosperity.

Fill their minds with the concept that there are 64 genders in the human species when in fact there are only two biological genders, you get sexually confused, mixed up, psychologically disturbed little boys and girls.  You also get stupid, alleged documentary videos on Netflix that try to convince a class of five-year olds that a four-year old boy just discovered that he was a she.  Ludicrous!  You also get a Netflix video called “Cuties” that exploits little girls dancing in sexual outfits and sexual poses.  Who, in their right mind, comes up with this crap?  Of course it is contrary to what is normal and violates the very essence of commons sense.  Any parent knows this, or should know this, instinctively.  Sex education is age specific.   Common sense dictates that normal or deviant sex cannot be conceptualized at ages under 10 but socialist Democrats think it is a great idea so that they can pander to the LGBTQ community.  This is not education.  This is purposeful propaganda and indoctrination for an off-beat agenda that is best left in the privacy of the home, like so many other human biological functions.  Our children are confused enough as it is.

This kind of perverse rationale leads to aborting babies in their third term, or even at birth, or worse, the collection and sale of human baby body parts.  Only an irrational, tortured mind could approve of these barbaric procedures.

To add to our upside down world there is the environmentalist-invented, perverted science of Climate Change.  (alias man-caused global warming) The socialist Democrats believe that Climate Change is an existential threat to the human species, man is causing it and the only solution is to spend trillions of dollars converting a fossil fuel-based energy source and economy to an intermittent solar and wind energy source, no matter how many jobs are lost, how much it will cost, how drastic it will change our lifestyle and the huge negatives that come with wind and solar energy.  True, unaltered, peer reviewed science debunks the whole concept of Climate Change but the Democrats don’t care.  They want absolute control and Climate Change is just another way to control the masses and rob them of their sustenance in a grand wealth-redistribution scheme.  They plan to shove their solution down your throats anyway they can.  With Biden at the helm of the sinking USS America ship, they will probably succeed.  (See: “Climate”)

Now anyone with any commons sense at all knows, a country without borders is a country losing its heritage and culture and inviting drugs, terrorists, human trafficking, disease and unskilled labor into its homeland.  And yet the socialist Democrats would have you believe that open borders, no immigration enforcement and sanctuary cities and states are good, sound government policy.  Why do they believe this?  Don’t let them try to convince you it is for altruistic or humane reasons.  Their immigration policy, or lack thereof, is purposely designed to flood America with Democrat voters, pure and simple.   Democrats think Americans are stupid and won’t notice their deviant ploy.  But in reality, they are very close to accomplishing their goal with a President Biden in the Oval Office.  Conservatives don’t have the votes.  How are we to stop them?  (See: “Your Conservative Vote Won’t Save America From Socialism”)

Socialist Democrats, starting as far back ad President Woodrow Wilson, created out of thin air a whole host of additional social rights accruing to American citizens.  Why?  To buy votes of course.  As the social rights grew under successive Democrat administrations, so did the enormous price to pay for those social rights.  As a result, in the intervening years since FDR first took office, the national debt has exploded exponentially to an astronomical $26 Trillion, and rising.  President FDR outlined these new social rights in a speech just before he died in 1944 after being elected president for a fourth term.  FDR’s second bill of rights included:

In contrast, the original bill of rights, contained in the first ten (10) Amendments to the U. S. Constitution, required only that government preserve, protect and defend those rights for the individual.  The federal government has failed miserably in their sworn duty.

And let’s not forget the Coronavirus that has allowed socialist Democrats to use the pandemic to exercise dictatorial rule over the masses.  Science means nothing to them, only raw political power.  While their constituents squirm under the pressures of the intermittent lock downs and go belly up, the elite, ruling class sneak off to some expensive, exclusive restaurant with their wealthy friends, or fly away to that quiet destination resort by the sea, basking in the glory of their new-found royalty.

Except this great super ideology of the socialist Democrats violates America’s cultural norms and free-market capitalism.  It renders political debate irrelevant and flies in the face of individual freedom and unalienable rights.

None of this socialism and identity politics makes any sense, except to further the goal of Democrats to obtain absolute power in America, exploiting human weakness to do it.  Most of it is the antithesis of a free society.  Essentially, it perverts what is normal and renders commons sense irrelevant.  But worse than that, it is destroying the core principles of our culture and our freedom.  In the end it will eventually destroy our peace and prosperity.  Why would we let it happen?

Thomas Jefferson wrote, “When we get piled upon one another in large cities, as in Europe, we shall become as corrupt as Europe.”  Democrat votes come out of big cities.  Big city corruption leads to voter fraud as we have seen in multiple states throughout America in the 2020 election.  Democrats, without honor, count the votes while excluding Republican observers, an open invitation to cheat.

Perhaps Founder John Adams predicted it when he said: “One day the masses will grow less steady, spirited and virtuous, the seekers more numerous and more corrupt, and every day increases the circles of their dependents and expectants, until virtue, integrity, public spirit, simplicity and frugality become the objects of ridicule and scorn, and vanity, luxury, foppery, selfishness, meanness, and downright venality swallow up the whole of society.”  How prophetic he was.

As the children in the back seat of the car say while on a road trip, “Are we there yet?”  Dad says from the front seat, “not quite, but were close.”