The US House of Representatives has passed a sweeping police reform bill that hopefully will fail to pass in the Senate or will be vetoed with little prospect of becoming law amid partisan gridlock. Critics claim that if they can ban police from carrying firearms it will give the ‘gun grabbers” a rationale to ban firearms for ownership by citizens.

The Democratic-controlled chamber voted 236-181 for the measure mainly along party lines on Thursday night.

But US President Donald Trump has threatened to veto the measure and some of his fellow Republicans in the GOP-controlled U.S. Senate are proposing their own, less far-reaching bill. 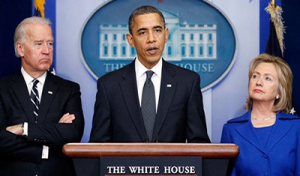 Following a few incidents involving police and black suspects, then President Barack Obama pushed his minions to enforce his executive order to take away certain weapons and equipment away from local police and sheriff departments throughout the nation. This latest action follows reports that intelligence reports are being doctored to underscore Obama’s strategy and to coincide with his statements.

High-tech weapons, equipment and vehicles are to be confiscated from law enforcement agencies across the country by the Obama administration despite the country’s sheriffs and lawmakers complaining that the equipment is more than ever necessary to protect communities from violence including incidents perpetrated by jihadists who are expected to attempt a repeat of attacks occurring in France, Belgium and other countries. Sheriffs such as Arizona’s Joe Arpaio and Wisconsin’s David Clarke have complained that losing armored vehicles and other equipment that are defensive not offensive will place police officers and sheriffs’ deputies, in addition to their communities, at risk from violent crime, riots and terrorism.

“These things are useful tools and the president taking them away will put more officers in jeopardy and at risk of harm or even death. I don’t know how he can sleep at night knowing his actions will have those repercussions,” argues Rep. Mike Rogers, R-Alabama.

Rogers explained that President Obama had issued Executive Order 13688 in January 2015 after the 2014 riots in Ferguson, Missouri., amid the outcry by liberal-left activists and Democrat lawmakers about the alleged “militarization” of the police.

“The do-gooders were more concerned about the rioters and looters than about the officers who had to face them and worry about how they used their weapons and equipment,” said former police officer and attorney Joseph Fitzgerald. “In fact, Obama and his Attorney General at the time [Eric Holder] took action even before the investigation that followed the shooting of a black man by a white officer was completed. By the way, the verdict in that case was that the officer was correct in his use of deadly force against a 6’8″ 300 lbs. assailant,” explained Fitzgerald. 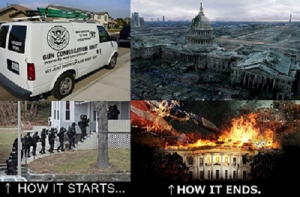 Progressives in the Democratic Party and their fellow travelers — Rev. Al Sharpton, Rev. Jesse Jackson, Eric Holder, the NAACP and others — were angry over the so-called “1033 program,” which the Defense Department initiated during the Clinton administration in 1997. The program allows the Department of Defense to send military surplus equipment such as armored tracked vehicles, camouflage uniforms and weapons to local law enforcement agencies at no cost to the departments or to the taxpayers.

The program saved money and also gave agencies the ability to deal with criminals and terrorists who use advanced weaponry especially IEDs (improvised explosive devices) and WMD (weapons of mass destruction) such as chemical, radioactive and biological weapons.

The list of banned items includes armored tracked vehicles, weaponized man or unmanned aircraft and vehicles, .50-caliber rifles and ammo, and camouflage equipment. Most of the equipment –except for items such as the Barrett .50 caliber sniper rifles — is meant to protect responding officers and first-responders.

Sheriffs — who are elected by voters as opposed to police chiefs who are appointed and controlled by politicians — using the equipment are visibly outraged, saying that the main complaints were against the armored tracked vehicles which have save lives in crisis situations, and double as rescue vehicles.

Congressman Rogers also added in a letter to Obama, “Less than a week after the horrific attacks on civilians in Paris, it seems more urgent than ever to ensure our law enforcement have the best equipment we can provide to counter any attack. It is just baffling to me that the president would weaken the possible security and safety of our local citizens.”