Democrats, Take Your Power-Hungry Demagogues And Shove It!

“One ought never to turn one’s back on a threatened danger and try to run away from it.  If you do, you will double the danger.  But if you meet it promptly and without flinching, you will reduce the danger by half.  Never run away from anything.  Never!”  —Winston Churchill

The Gadsden Flag, named after Christopher Gadsden, an American general and statesman, came to be a symbol of the thirteen original colonies and of American freedom and spirit.  Its origins are traced back to Benjamin Franklin from a hand carved replica he made of a snake cut into eight pieces that represented the 13 colonies, with the head being the New England colonies and the tail representing South Carolina.  This hand carved image became one of the first political cartoons in history. 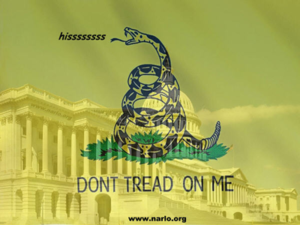 Paul Revere added the symbol as a snake, joined to fight a British Dragon, in an article in the “Massachusetts Spy”, one of the first newspapers in the new world.

In an essay published in the Pennsylvania Journal, Benjamin Franklin said: “I recollected that her eye (speaking of the snake) excelled in brightness, that of any other animal, and that she has no eye-lid.  She may therefore be esteemed an emblem of vigilance.  She never begins an attack, nor, when once engaged, ever surrenders: She is therefore an emblem of magnanimity and true courage.”

Sadly, Americans have been running away from danger and their right to individual sovereignty for decades.   The price they will pay for their apathy will be heavy indeed.

Here are a few excerpts from the Declaration of Independence as our Founding Fathers sought redress from the oppressive hand of King George III, of England.  The parallels are uncanny, startling and downright disturbing.

How many of these statements from the Declaration are directly applicable to our current situation under an oppressive United States Government?  All of them!!!    It’s going to get even more oppressive under a Harris-Biden Administration.

It appears that after 240 plus years and the tens of thousands of men and women who were maimed or gave their lives to defend our freedom, we successfully became independent from a foreign power, England, only to become helplessly dependent on our own government.

A country founded on the God-given, unalienable individual rights and self-reliance, has morphed into weak individuals, dependency and a complete willingness to be dominated by an ever-more-powerful government, local, state, or federal, because that government has brought a perpetual Christmas as an all-benevolent Santa Claus, handing out “free” gifts, largess and public welfare, transferred by force at the point of a gun, from the sweat, blood and tears of the American producer.

Government has become the purveyor of waste, fraud, abuse and corruption and destroys America’s free spirit along with its independence, creativity, ingenuity, industriousness and generosity.  Almost everything that government touches ends up in failure, or very expensive, with dire, unintended consequences.  Or maybe those consequences are intended to further government’s control over the people.

Democrats have taken the Coronavirus pandemic and turned it into a rationale to increase their political power way beyond the bounds of their charter.  They have used that power to withdraw all individual constitutional protections from the people.  They have ignored the science and exercised dictatorial control over selected segments of the economy and for all intents and purposes, issued a death sentence to the hapless victims of their increased power.  It is well past time to tell those Democrats, “Don’t Tread On Me” and “Get Off My Back.”  Many are doing so as we speak and the mood is growing.  Could a revolution be far behind?

It is time to bring back the symbol of American freedom and indomitable spirit, the Gadsden Flag, with the message to everyone in Government and those that support their policies of socialism, communism and radical environmentalism, “Don’t Tread On Me“, or “Get Your Cotton Pickin’ Hands Off My Money, My Property, My Health Care and My Life because I am a proud American and I don’t NEED or WANT your interference.  You don’t own me.”

I will dedicate my “life, my fortune and my sacred honor” in the defense of freedom for me, my children and my grandchildren.   As long as there is breath in my body, I shall not submit to government’s unconstitutional power and I will enlist a multitude of others in this most noble of all causes, the preservation, protection and defense of freedom and liberty for all.

We call out to those whose spirit and resolve are at the core of their being and represent the very soul of liberty.  We call out to all Americans who believe strongly in righting a wrong and who have the courage and the will to return this great land to the destiny for which it was born; the extension of liberty for Americans and all other peoples of the Earth, into the infinite future.  For life without liberty is not life at all, but in fact is a living Hell in slavery.

What the colonists faced with the British, we now face with our own government.  It took a bloody revolution to unlock the chains of English slavery.  The question is, can we unlock the chains of American slavery with just words and civil deeds, or will once again freedom have to be regained by force and bloody violence?  We urge that long before violence becomes the only alternative, rise up so that we may regain our freedom by the application of our own law, which provides us with a legal and lawful mechanism to hold government within its constitutional limits.  Let us return our laws to common sense, constitutional principles and restore the goodness that lies in the hearts of all men, to our institutions of freedom, such that freedom is perpetual instead of accidental, or born out of misery, heartache, violence and revolution.  Freedom is always in our grasp but we must at all times be ready and willing to make the sacrifices that are necessary to maintain it.  Now is that time.  Let us declare a “Declaration of Defiance.”

This will conclude our weekly column for 2020.  We will restart the column in January 2021.

It has been a tumultuous year, full of unknowns, unpredictable events, Democrat power grabs, massive pain and suffering for thousands of small businesses, unprecedented un-employment, trillion dollar stimulus packages that have exploded the national debt and the unheard of release of a vaccine in less than 10 months.  Years before 2020 we have seen the 13 colonies that gave birth to freedom, morph into Karl Marx strongholds.  We have witnessed the coast states descend into fiscal and moral bankruptcy by promising too much government largess to its citizens.

Many will be glad to see 2020 fade into the history books.  Unfortunately, 2021 may not be any better under a Harris-Biden Administration.  We shall see.

We wish everyone a Merry Christmas, hopefully shared with family and friends in spite of the virus.  We urge you not to let fear and government intimidation rule your holiday, or your lives.  “Tell Democrats To Take Their Power-Hungry Demagogues And Shove It!”  Freedom has not yet died in America.